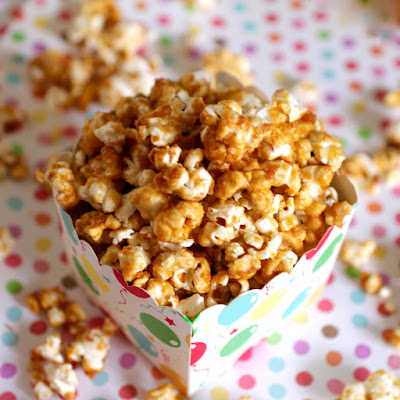 Last night we drove home from Geelong after Sylvia stayed at my mum's.  It usually takes a little over an hour.  Yesterday it took me two and a half hours.  I am still feeling behind.  Dinner was late last night.  This morning we slept in.  We have been to the Coburg Carnivale today and tonight I have baked bread, made strawberry sauce and almost packed for holidays tomorrow.  With the first week of the school holidays behind us, I am sharing some great holiday food - salted caramel popcorn. 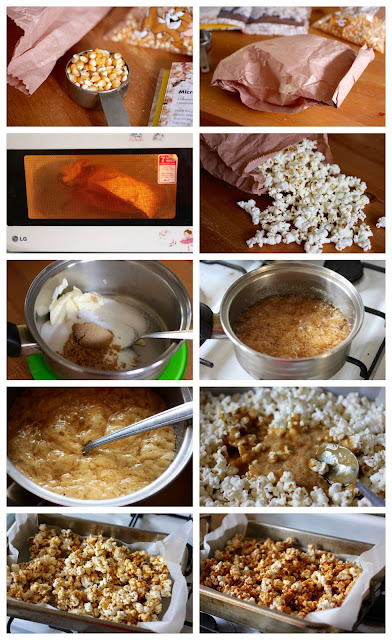 I don't make popcorn or caramel sauce often.  However Sylvia bought E a bag of popcorn kernels for Father's Day and chose the recipe.  I have made it twice.  Once I thought I could pop the kernels while the caramel was cooking but learnt the hard way that it doesn't work so well.  They were still good to snack on after a netball lesson.  The second time Sylvia had decided it was needed for movie night during the school holidays.  I made sure to be more organised and think it was slightly better. 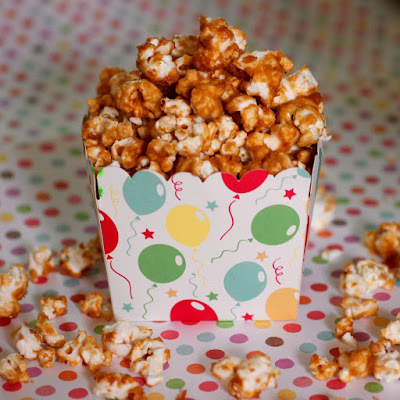 The second lot was made with only half the butter required but I found that coconut oil was a fine substitute for the rest of it.  I really loved it but it was terribly moreish.  Sylvia is already browsing our popcorn book for more ideas on how to flavour the popcorn.  She fancies rainbow.  I want coconut rough. 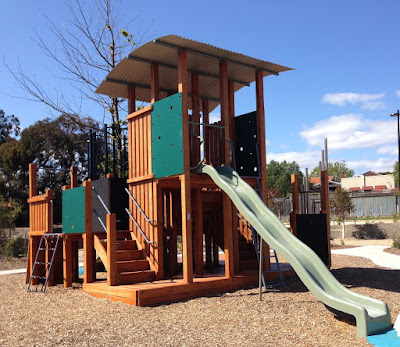 We had some over after movie night.  I mixed the leftovers with a trail mix of almonds, dried cranberries, pistachios and white chocolate chips.  It was great for snacking at the new park in Bell Street (by Kelson Street). Sylvia and her kinder friend really enjoyed the flying fox. 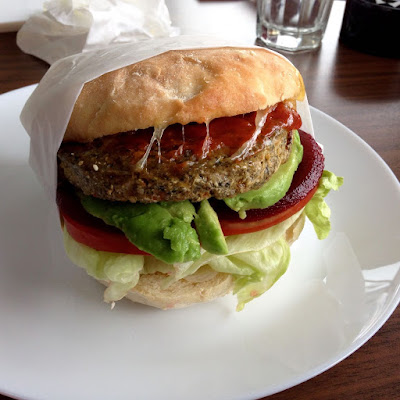 It has been a busy week of the school holidays.  Sylvia has had a few playdates, some time with her cousins holiday gymnastics and we had lunch at Candy Ink (corner Moreland Rd and Nicholson St in Coburg).  I had a quinoa vegie burger that was very nice (other than the under ripe avocado).  I'd be interested to return and try the vegan big breakfast with the vegie sausage. 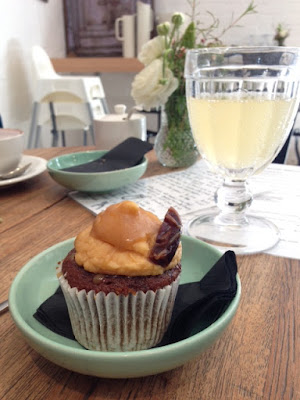 I seem to have just spent most of the week chasing my tail.  However I have caught up with friends, seen Joan Baez in concert (amazing) and had afternoon tea at 2 Little Birds with Sylvia and my mum in Geelong.  They had lots of beautiful cakes I had this lovely caramel date cupcake. 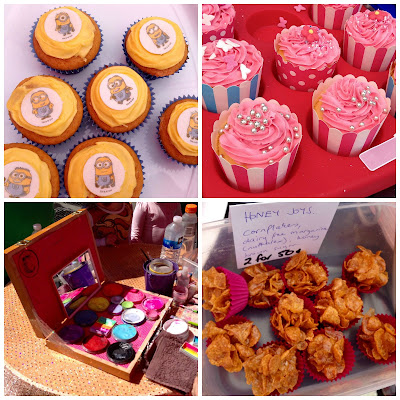 The weekend snuck up on me very quietly.  But I was glad to welcome the warm weather and head off to the holiday atmosphere of Coburg Carnivale.  We took along honey joys to the cake stall and sampled a few of the cakes and slices.  Sylvia had a rainbow painted on her face.  We all caught up with friends and enjoyed some lunch from the mall.  I still love the Half Moon falafels! 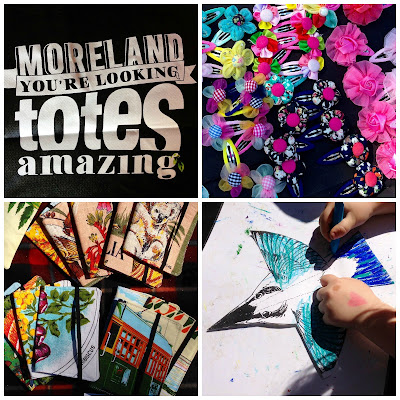 We tried to keep our eyes on the performances but spent more time on the suitcase rummage.  I particularly loved Retro Momentos upcycled Australian tea towels that were made into bags, wallets and aprons.  Sylvia made a badge and a Kingfisher bird and E bought some artwork and got a free Moreland tote bag. 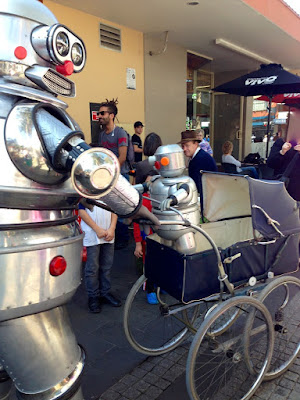 There was also dancing, music, circus performers.  My favourite thing of all at the Carnivale was the robot baby in the pram.  The mama (or dada?) robot was very amusing but the robot baby was so cute that I want one! And on that note I will leave you to head off on holiday.  I have scheduled a few posts while we are away but will be quiet on the commenting until we are back on Friday.

Make popcorn first by putting 1/4 cup of popcorn kernels in a large brown bag, folding it over 3 times and twisting the edges.  Microwave on high for 2 minutes or until the popping reduces to once every few seconds.  Sort through for any unpopped kernels.  We found the easiest way to do this was to put into a bowl, take out the fluffy popped corn at the top and the unpopped ones would sink to the bottom.  Repeat with second 1/4 cup of popcorn kernels.   Spread popped corn into a large roasting tray lined with baking paper.

To make the caramel, mix butter, sugars and salt in a medium saucepan.  Melt butter and sugar.  Gently bring to the boil and simmer for 5 minutes without stirring.  Remove from heat.  Mix in vanilla and bicarb immediately.  Pour over popcorn in prepared tin and stir until mixed through.