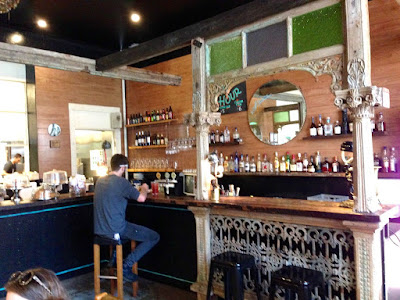 E and I dropped of Sylvia for an extended playdate (thanks Kerin) the other day and headed into the city for lunch at 1000 Pound Bend and the David Bowie exhibition at ACMI.  It was a day of sensory overload but sadly not of the culinary type.  However we enjoyed our afternoon out. 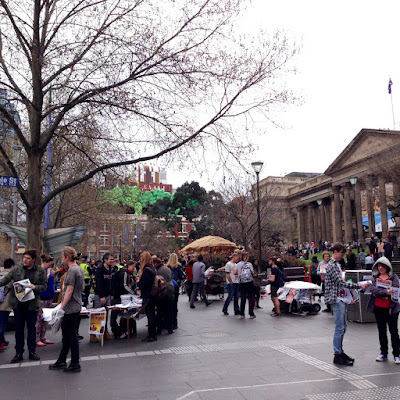 Arriving in the city, we disembarked from our tram at the State Library where a protest in support of refugees was in progress.  I was a little sad not to be able to join in but our time was limited. 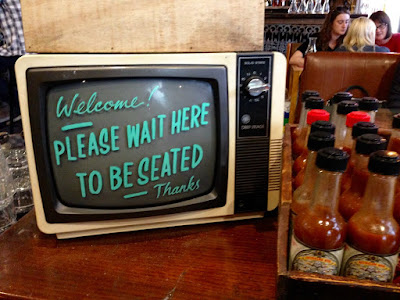 Instead we headed down Little Lonsdale Street to 1000 Pound Bend.  E and I love a grungy cafe in Brunswick or Fitzroy but there are less of them in the city.  So we were pleased to find this warehouse converted into an art student cafe so centrally located. 1000 Pound Bend was even more of interest because it is a favourite haunt of Amanda Palmer when she has been in Melbourne.

I really loved use of found objects in the decor.  I counted three small old television sets.  They make me feel nostalgic for when we had such sets in student houses and we played about with the rabbit ears, strove to see the picture through the snow and hit the tv to stop the picture rolling! 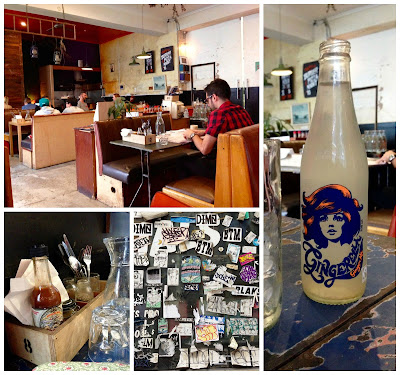 In the top photo you can see some old archways at the bar.  They are works of art.  Looking around we spotted a little book nook, old paraffin lamps and old paintings.  The main problem with the ambiance was that the music was a bit too loud.  The waitresses seemed to like it as they were dancing about the cafe as they took orders!  I started with a very nice ginger beer. 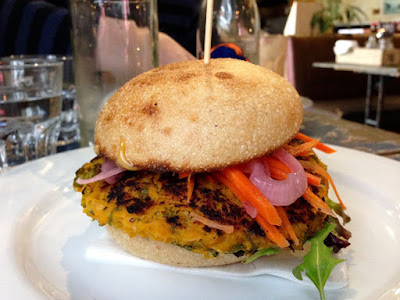 We were there for lunch and the menu offered a few vegetarian options.  Chana masala, an antipasto plate, kimchi pancakes, a haloumi burger and a vegan burger as well as the breakfast faves an eggy fry up and smashed avocado on toast.  I chose the vegan pumpkin, chickpea and kale burger with harissa mayonnaise and pickled vegetables.  The pattie was huge and overflowed the bun.  I enjoyed it but I wished I had some salad and chips on the side.  It just was too much bun and burger patty which made it seem a little plain, albeit slightly spicy.  E reported that his croissant with ham and cheese was fine. 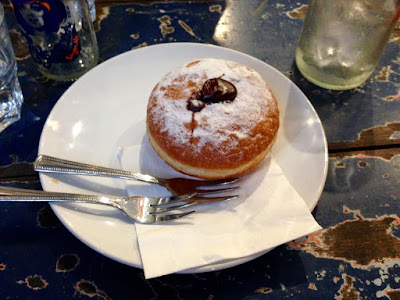 Then because I am addicted to nutella doughnuts (as you will see in a coming post), I shared one with E.  It was a big mistake.  I later described it as being like a kitchen sponge filled with nutella.  I hesitate to be so down on any cafe but this doughnut was really dry.  We really loved the ambiance and hope to return to the cafe, though I think we would be happy to just stop for a drink rather than a meal.  Though I would be interested to try other dishes.

One part of the building that fascinated us was the windows which had bars on them but no glass.  We were sure there must be shutters.  However when I asked a waitress, I was told that they had recently changed the layout and the windows near us had previously been in a smoking section. 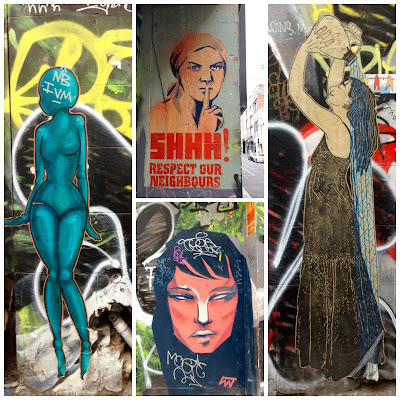 I love a place with some interesting street art and you will know 1000 Pound Bend by its street art as you walk along Little Lonsdale Street.  So we admired the street art as we left and boarded a tram to ACMI in Federation Square.  (ACMI's more pretentious name is the Australian Centre for the Moving Image.) 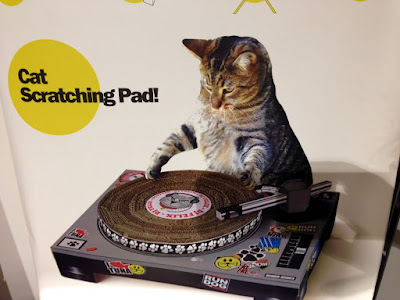 We stopped in the gift shop first and, although there is some interesting David Bowie merchandise, the item that really caught my eye was this cat scratching pad.  How cute is that!

But onto the exhibition, it was overwhelming.  In fact, David Bowie is overwhelming with all his constantly changing styles, music, masks, haircuts, costumes and brilliant ideas!  My favourite exhibit was a tissue blotted with his lipstick that was over 40 years old!  Really!  Who kept it?  I also loved watching the Life on Mars video while standing beside Bowie's powder blue suit and looking at his handwritten lyrics. 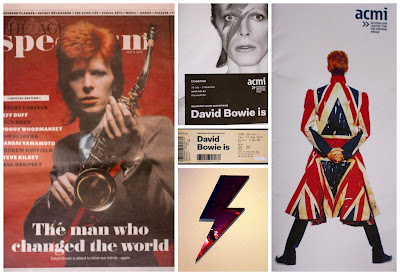 It is the first exhibition I have been to where we wore headphones that pick up the soundtrack depending on where we stood.  This added to the sensory overload.  I did wonder that the exhibition started with Bowie's early life with lots of information about his personal life and historical context but there was little of this after the 1960s.  However it is a great exhibition and made for a really interesting afternoon out.