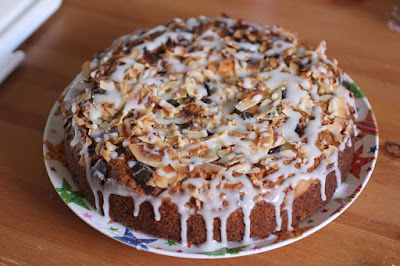 This is one of those posts that is struggling to be written but I am not giving up without a fight.  Because the cake was excellent and I really wanted to share a post today for International Chocolate Day. In fact, if I had to recommend a cake for the day it would be this one with lots of chunks of chocolate studding a moist vegan coconut cake. 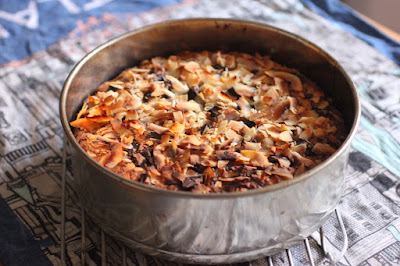 I know some people do not like the word moist but I have far greater problems in my life.  Like driving into the glare of the evening sun.  Or Sylvia snapping the brake cable on her bike.  Or finding that the photos of the cake in this post would not work on my photo software so I couldn't edit them properly.  Or having a complete fail when the slice I made was more like baked porridge than cakey slice.  Or making strawberry sauce for pancakes this morning and finding that E didn't even notice when he had his pancakes later than Sylvia and me.  Actually that wasn't so bad because I got to eat the rest of the sauce straight out of the saucepan and it was no great hardship.  More worrying is that my parents' dog is very sick and I am yet to hear if he survived the day!  Big sigh! 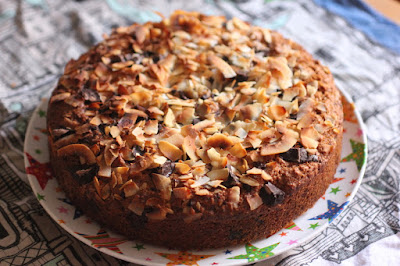 No wonder I need chocolate.  Fortunately I had oodles of it today in the form of mars bar slice.  I haven't made this slice for years but thought it would be a nice treat.  It was also good to take along for afternoon tea when we saw our friends with their new (very cute) baby.  Let's just forget that the chocolate seized when I microwaved it and had to spread rather than poured over the top of the slice! 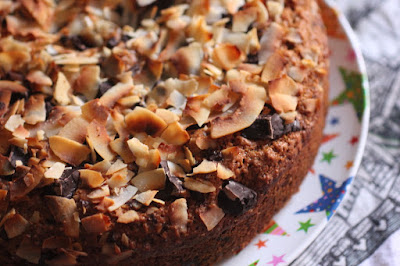 But back to the chocolate coconut cake.  It was magnificent.  I made it for a morning tea for a friend's birthday a few weeks back.  While it was baked the previous evening, I drizzled the icing over it shortly before leaving home.  If you are like me and love a soft cake textured with dried coconut, an overload of chocolate, a crispy coconut topping and just a wee drizzle of icing, then this cake is for you. 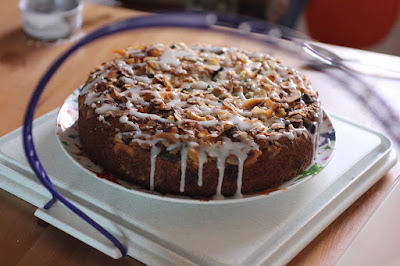 A few notes on the cake.  The Whittakers 67% dark chocolate works brilliantly in this cake.  I used a little more than needed but did not regret it.  I didn't have orange zest and am not sure it is necessary but have left it there as it seems a nice idea.  I had a little coconut milk left from a 270ml tin that was just enough for the icing.  I actually used less icing than I made because I wanted it lacy so we could see the coconut flakes and chocolate chunks. I thought the coconut flakes were too well done - because I made a pitiful effort at covering them with foil when they were browned - but they were fine on the end result.

I used a shredded coconut in the cake that is slightly larger shreds than my usual desiccated coconut.  As always it wasn't sweetened, nor was my coconut milk but I haven't specified this in the recipe as it is one of those odd ideas - I am not sure I have seen sweetened coconut milk and I rarely see sweetened shredded coconut.  I think I bought sweetened shredded coconut once but it was a mistake.  Anyway let's not go there.  Instead we can just pretend such things don't exist and we live in a world where packaged coconut doesn't need sugar because we are going to add sugar into the cake anyway!  But I can assure you this isn't a terribly sweet cake.  Just amazingly delicious.  Truly worthy of International Chocolate Day! 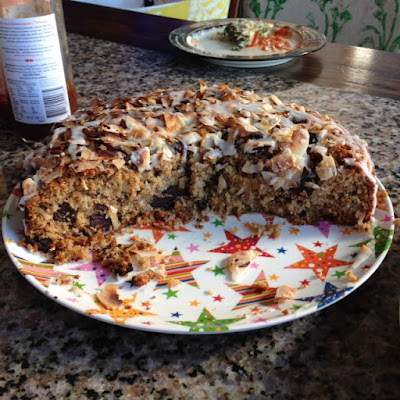 Coconut and chocolate chunk cake
Adapted from the Tolerant Vegan

Preheat oven to 180 C and grease and line a 22cm round cake tin.

Scrape mixture into prepared cake tin.  Scatter with chocolate chunks and then coconut flakes.  Bake for about 60 minutes or until a skewer inserted into the middle misses a piece of chocolate and comes out clean.  If the coconut flakes are brown enough before the cake is cooked, cover with foil as they will continue to darken!  Cool in the tin.

When cool remove from tin and place coconut flakes upwards on a serving plate.  Mix icing sugar and coconut milk to make a thin icing.  Drizzle over cake sparingly so that the coconut flakes are still visible.

On the stereo:
The Best of Bowie: David Bowie