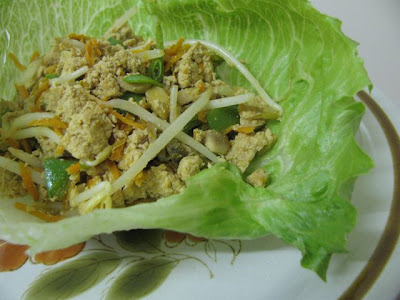 Some time ago I saw Frances making San Choy Bau on her Crunchy Green Things blog. The simplicity of the Asian dish appealed to me. I had not encountered it before, no doubt because I have never found a vegetarian version on a restaurant menu. But the idea of serving a flavoursome vegetarian mix in lettuce leaves seemed like fun. I enjoyed eating it but as I am unfamiliar with the dish I found it a bit of a mystery.

I was curious about San Choy Bau. On the web I found it had featured on two television shows recently. Kylie Kwong had made it on her Simply Magic television series. She is one of Australia’s celebrity chefs. Her family is from China and apparently this dish is popular there. Tobie Puttock, another celebrity chef, also made it in Shanghai on Toby and Matt: Asia television series. They both spell it Sung Choi Bao.

When I served it, I suddenly wondered where the carbs were. I know there are lots of people who have low carb diets who might like this but we usually have some carbs on our plate. Maybe it was meant to be one of many courses or a starter.

I had thought I would be able to pick it up in the lettuce leaf and eat it with my fingers but the large serving of hot filling in a large lettuce leaf was not something I could handle easily. Too hot. Too big. The next night I served it on rice with some shredded lettuce on top. If I was to serve it as finger food I would serve each person with several small pieces of lettuce rather than all of it in one piece of lettuce. 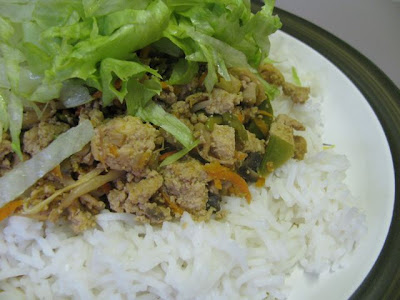 This is a great dish for our recent hot weather. It will suit gluten free and/or vegan diets. I loved the marinated tofu and vegetables in the filling. I thought I had read that san choy bau was often made with pork. On the second night when the tofu was really full of flavour I said to E that it was just like pork. He gave me a look that suggested it is a long time since I had pork. It tasted good anyway.

So I leave you with this quote that I came across recently. It struck a chord with me. Vegetarian dishes are not about imitating meat, even when fitting in with a meat-centred banquet – but rather it is about making food taste good.

“You can't make a nut loaf taste like meatloaf but you can make a nut loaf that tastes good.” in ‘Kitchen saboteurs - Avoid pitfalls, not benefits, of a vegetarian diet’, Liz Biro, Star News Online, 7 January 2010

Vegetarian San Choy Bau
Adapted from Kylie Kwong (via Crunchy Green Things) and Jill Dupleix
serves 4
Place crumbled tofu into a large bowl and add rice wine, soy sauce, sugar and sesame oil. Leave to marinate while you chop vegetables. Place vegetables in bowl with tofu as they are chopped. Heat a large frypan or wok over medium high heat. Cook all ingredients except (bean sprouts and lettuce leaves) in vegetable oil for 4-5 minutes. Add bean sprouts and cook another 2-3 minutes. Serve in lettuce leaves or on a bed of rice with lettuce leaves shredded.

* January 2012 - tried this with a tin of drained brown lentils instead of tofu and it worked very well.

On the stereo:
The Detectives: The John Gregor Orchestra
Posted by Johanna GGG at 22:54