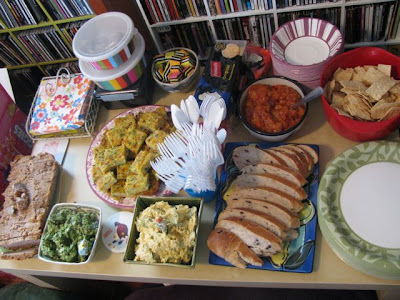 Having a birthday on the week of Australia Day is a mixed blessing. It means that there is a public holiday that week but also that many friends are busy on the said holiday, especially if like me you decide on a casual get-together on the holiday only about a week beforehand. (You can see why I never manage to celebrate Burns Night on 25 January in the same week.) Despite such disorganisation, we had a great lunch to celebrate my birthday last Tuesday with friends and family.

I had decided it was a good year to hold a lunch while I was not working. I forgot just how busy it is with a baby. Despite good intentions, I never get as much done as I want. (Oh yes, I remember, that also happened before I had any babies!) I decided to make food the few days beforehand as some things keep well in the fridge. 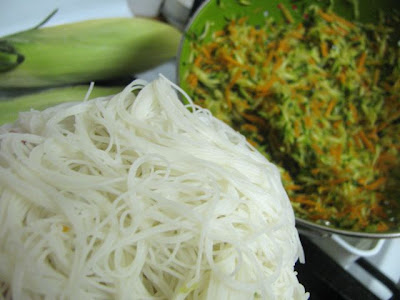 On Sunday I made cheese and walnut loaf, pea pesto dip, and apricot and cheese balls (with some cranberries thrown in) plus a stew and some jam. On Monday I made pumpkin hummus (a bit like this dip but boiled pumpkin rather than roasted), mud cake, grubs, and noodle slice.

I was relying on many old favourite recipes but had been attracted by the noodle slice in the lastest SuperFood Ideas magazine. It required a bit of chopping vegetables but was easy and yummy. Unfortunately, I had thought it was gluten free until I noticed myself throwing in self raising flour. But there was plenty else for the GF sister and niece. The slice was easy to cut into neat squares and made great finger food. 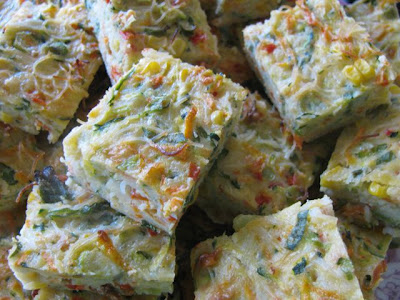 I also had the lovely tomato and peach relish in the fridge (perfect for the noodle slice and nut roast), lots of vegetables, fruit and rice crackers. By Tuesday the house was still a mess, albeit slightly reduced, but at least it was packed with good food. We spent most of Tuesday morning cleaning. What couldn't be sorted by midday was unceremoniously dumped into the bedroom. Sylvia helped by having a sleep and I was relieved that the council emptied out bins on the public holiday.

By the time everyone arrived I was exhausted. More food and drink arrived with the guests. First to arrive were Kathleen, Michael and kids. They brought fresh eggs from the chooks in their backyard and some home made sourdough spelt bread with olives. This bread was amazing and I was only too sad to see how quickly it disappeared but I did manage to nab a piece. Kathleen set to work slicing up bread and nut roast. I cut up vegetables for the dips and made a quick lentil salad. I also cooked up lots of rice for a rice salad that I never managed to make, but Sylvia enjoyed having some of it with her lunch. 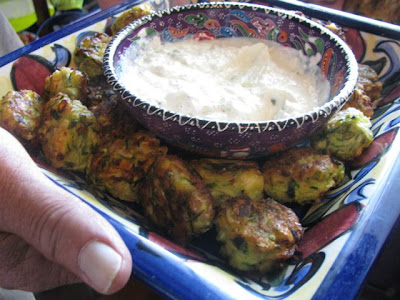 My parents, family and more friends soon arrived. My mum had made zucchini and feta balls (and remembered to put in gluten free flour unlike me) with a yoghurt dipping sauce. My sister, Fran, had brought bread and coleslaw. We ran out of room on the coffee table and started using the kitchen table. You can glimpse my birthday cake on the kitchen table but I will tell you more about that in a separate post. 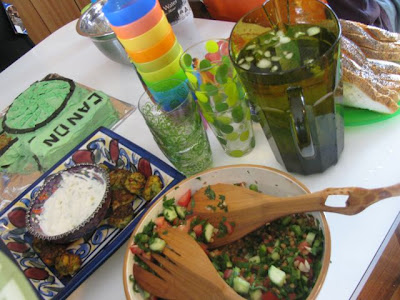 I had been concerned that it would be unreasonably hot but the forecast 34 C never appeared. Instead we had a beautiful day of 24 C. Drinks were still very welcome. Water was a good option except when someone dropped hummus in it. Cold fizzy drinks always go down well, especially with the kids. Fortunately just as I was running out of ginger beer, Yavanna and Chris arrived with an armload of bottles of fizzy drink. We had beer in the fridge but sort of forgot about it. (Oh yes, most unAustralian but what do you expect of us who shun meat and bbqs on Australia Day.) 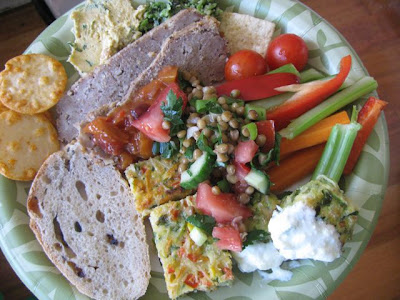 Here is my plate of savoury food. You can see the excellent texture on Kathleen's bread. After most people had had their full, we cleared the plates of savoury food onto the benches in the kitchen, for the latecomers to pick at, and we put out dessert. By then I had run out of time, energy and patience as you can see by the delightfully chaotic way I have piled up the fresh fruit. We also had grubs, apricot and cheese balls, little cakes (thanks Wendy), frerrer rocher (thanks Heather) and my mum's pav. 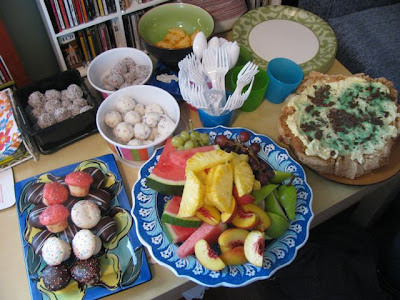 You can see the pavlova above on the right covered with crushed peppermint crisp. For those of you not familiar with peppermint crisp, it is covered with chocolate which is why there are chocolate shards as well as green peppermint. We all agreed it was the perfect patriotic dessert for Australia Day. It went quickly. I am not a huge pav fan but had a little piece for nostalgia's sake, and I do enjoy a little of it. My mum even brought it on one of the dinner plates she has had since we were kids. Ah, memories! 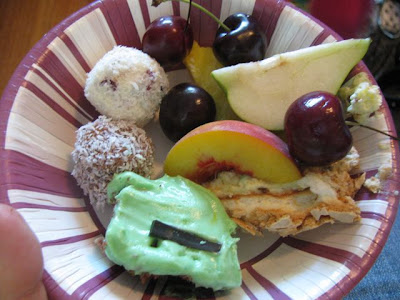 But I digress. Here is my dessert selection with another view of the lovely green birthday cake. I had to blow out the candles before we started eating the sweet food. It was probably one of the few quiet moments in the day. There were quite a few kids who had lots of fun running about our bedrooms and backyard. Ella and Rosie had a house under our desk at one stage until my mum told them (in the way that only a retired schoolteacher can) to go to Sylvia's room.

They had lots of fun with the toys in Sylvia's room, if the distribution of them over the floor was any indication. Cooper got upset by the little gate to the bathroom to stop Sylvia getting in, but was placated by a toy B2 (whom I am sure you would all know is one of the Bananas in Pyjamas!) Sylvia didn't do too much playing with the other kids because she was busy cuddling. Anyone who wanted to hold her wore my mum's beads as Sylvia was very keen on these. Meanwhile my little niece Grace was carrying our cat Zinc around like one of her dolls.

My family, as ever, was very helpful in keeping the house under control. I had been worried about having too many people in our small house but it worked very well. I saw my mum doing the dishes with my brother Andy drying at one stage and I think others also helped. It was lovely when the last guest left to have hardly any dishes to do or lunchtime mess to clean up. 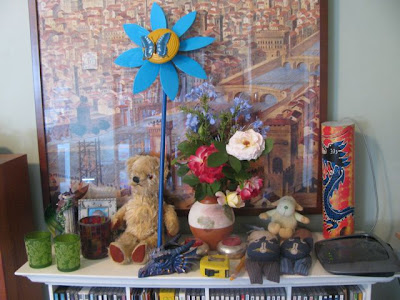 We had loads of food leftover, which was just as well. I was tired after the preparation, so we were able to live on leftovers for a few days, including on my birthday when the dish I made was a disaster.

After everyone had gone, I gave Sylvia a little piece of chocolate cake and she gobbled it up. (Who wouldn't!) I breathed a sigh of relief that she didn't react to the egg. Then I got bolder and checked on this website that I could feed her ground nuts at her age, and fed her a little nut roast. She ate it up and I breathed another sigh of relief. 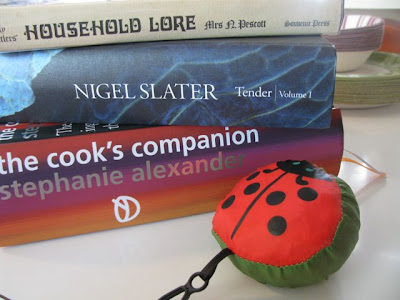 As for presents, it seemed to be the a birthday of cookbooks. I am still trawling through my new weighty tomes and loving them. Yav and Chris brought flowers, and as I have mentioned above, others brought food. Good company, good food and good books are just the thing for a happy birthday.

Place noodles in a heatproof bowl and cover with boiling water. Stand for 10 minutes. Drain and use scissors to snip into shorter lengths. Cool.

Squeeze excess liquid from grated carrot and zucchin (I pressed them into a colander). Combine vegetables, flour, cheese and noodles in a mixing bowl. Use a fork to lightly whisk together eggs, milk, oil, soy sauce and vinegar in a small bowl or large jug. Pour into vegetable mixture and mix together.

Spread batter into prepared lamington tin and smooth with the back of a spoon. Bake for 20-25 minutes (I think I did mine for a bit longer but can't quite remember). It should be golden and springy in the middle. Stand for 20 minutes before serving or cut into squares and keep in the fridge for 2 days. It is a great nibble for parties, picnics and lunchboxes.