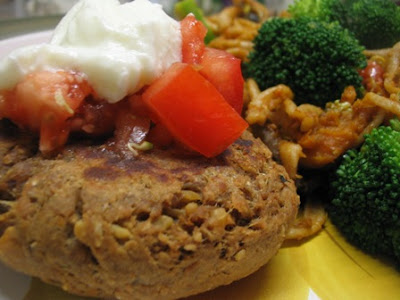 When I saw Cindy making these chickpea cutlets on Where’s the Beef?, I was curious. Apparently these are everywhere in the world of vegan blogging, but it seems they originated with Isa and Terry in 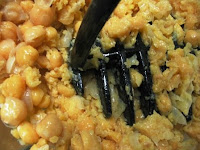 Veganomicon and were posted by them on Chow.com.

But what interested me most was the gluten flour that Cindy had bought at Allergy Block in Carlton. I keep seeing vital wheat gluten in recipes and not really understood what it was. But when I saw I could buy it at a local health food store, I had to find out. These chickpea cutlets and a loaf of bread were a good way to explore this new substance. As I began to make the cutlets I read I was meant to knead the mixture till gluten strings formed. Huh? But once I did the kneading, even though it was a weird texture to knead, it made sense. Lo and behold, the gluten strings appeared. I took a photo of them because it was so weird.

This has opened up a whole world of new possibilities. Now I can try making my own vegetarian sausages, which means not always having to buy them from the supermarket. I dislike seitan 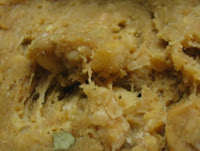 (satan?) which is made from this wheat gluten so I am a little wary of it but am fascinated by the way it held the burger together with a hint of stretch in the texture. Isa and Terry say it is ‘vegan food you can eat with a steak knife’. True. But these burgers taste so much better than steak (a personal viewpoint I know).

The vital wheat gluten is not the only challenge in the ingredients list. I was a little unsure of putting so much soy sauce in but the end result is tasty rather than salty. I also don’t know what is meant by paprika – does it mean mild, hot or smoked. I suspect you could use any of these and get quite different tasting burgers. I decided to go with the gentle flavour of mild paprika. I also didn't 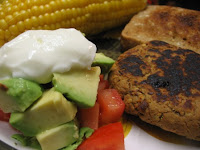 get my burgers as nicely golden brown as Cindy but they still tasted great. They were lovely with leftover pasta the first night, and with salad, corn and toast the second night.

Oh and if you want to check out what fellow Melbourne vegetarian bloggers, Cindy and Michael from Where’s the Beef?, are eating at the moment, you will find that they are not posting many recipes right now. They are too busy experiencing the delights of the UK, including Edinburgh. I am enjoying a bit of armchair (deskchair?) travel and recommend you head over too if you like travel photos with a bit of food in the mix.

Chickpea cutlets
(adapted from Chow.com via Where’s the Beef?)
Serves 4

Mash the chickpeas and oil together in a bowl until all chickpeas are smashed into a smoothish mixture. Add the remaining ingredients and mix till a smooth dough forms. Knead the dough for about 3 minutes, until gluten strings form. Divide the dough into four pieces and flatten them into patties, 1.5 cm thick (or thinner).

Bake or fry them. For both golden crunch and health, the best option is to fry in a little oil for 2-3 minutes or til golden on both sides and then bake a further 15 minutes at 180 C to cook through.

On the stereo:
Among My Swan: Mazzie Star
Posted by Johanna GGG at 19:50