Isa's Pizza - from disaster to delicious 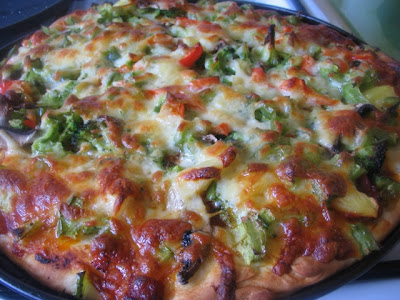 Pizza seems such an easy option so I suggested it as part of Francesca and my next cooking day. (Pizza was merely the entrée – the main event was the gluten free afternoon tea – more of that soon). My large bag of bread flour still mopes about my benchtop feeling unloved, so I said I would make pizza dough. I've done it before - how hard could it be!

But doubling any recipe is always a risk. On Sunday morning it was an unmitigated disaster. I decided to make two bowls of dough and put a cup of lukewarm water in each. But when I 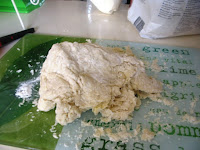 looked I couldn’t see the water in my glass pyrex bowl and didn’t find it there til half an hour later after I had thought I had accidentally put all water in one bowl (my doubts had mounted as I added water to a dough mixture that was stubbornly dry).

It was only when I went to oil my pyrex bowl (so the dough could rise in it) I finally found it had a cup of water in it. Argh! Suffice to say it did not put me in a good mood. I had two bowls of dodgy pizza dough and Fran, Steve and three kids expected in an hour or two. I was not feeling optimistic. 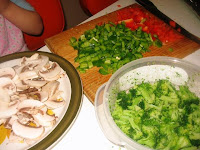 The one positive about this dough was that it rose for an hour, got punched down and then was to rise another hour or two, which – time permitting – I thought seemed likely to help the dough along.

Fran and Steve and kids arrived. Fran bought a bag of veggies to cut up for the toppings. We had enough dough for four 28cm (11”) pizzas. The kids’ favourite task for the day seemed to be rolling the pizza dough. No doubt this was partly due to it being one of the first things they did before the concentration waned. And who wouldn’t want to use my new green rolling pin! I was pleased the dough was stretchy and pliable (and after much earlier cursing, I was most grateful to Isa of Vegan with a Vengeance for her excellent dough recipe). 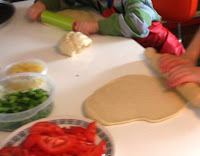 personalities (and leftovers for that night’s dinner). The toppings were generous servings of broccoli, mushroom, tomato, capsicum and pineapple. I had meant to roast pumpkin for Maykaylah but got too stressed to get organized. Fran had also brought over onion which I like on pizza but we forgot. I know that technically pizza should be a bit minimalist but that is not my style and lots of veggies on top mean you can forgo salad or side veggies when you are busy.

After all my angst, the dough was great – soft, bready and not too soggy. One pizza was a little soggy which we attributed to too many tomato slices. You will see from my pic that we cooked the pizza so that cheese was golden brown. When Fran saw how much I cooked it, she was worried it was too much for the kids. E likes his cheese just melted but I like it cooked til it starts to brown and crisp up. But no one complained. And we had leftovers for later.

Pizza dough
(from Vegan with a Vengeance)

Isa gives a long chatty essay about making pizza dough which I will not even attempt to replicate so if you want lots of information go to the book! This is the abridged version.

Place warm water, sugar and yeast in a large bowl. Stir and then stand 10 minutes. It should be frothy. Then add oil and stir in. Add flour and salt. Isa says to just add them all together but I only used 2½ cups (5 for my double mixture) so you might want to go easy on the flour and not add it all at once. Mix with spoon or hands. It should form a shaggy (slightly sticky) dough that you can scrape out onto a floured surface. (I use a chopping board which I find easier when I clean up but it wasn’t holding to the bench so I had to put rubber gloves under it so it didn’t slip and slide while I kneaded). Knead about 10 minutes. It should be ‘nice and stretchy, still moist and tacky but not sticky or gooey’ according to Isa.

Form dough into a ball and put in an oiled bowl – swish the ball around so it is lightly covered with oil. Cover with clingwrap or a damp teatowel and place in a warm place til it has doubled in size. This should take about an hour. Uncover, punch down to remove the air and knead for a minute or two. Place back in bowl and cover. Isa says you can freeze it now or leave as little as 10 minutes or as long as 2 hours. She says it is up to you – probably depends on stress levels and when you want to eat. 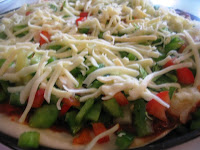 When you are ready to assemble pizza cut dough in two and stretch to fit two 14” pizza pans. Or if you are me, get out a rolling pin and roll and stretch it and you will fit two 11” pizza pans. I greased my pans lightly before putting the dough in.

Put whatever toppings you like on – we put on pizza sauce, mushrooms, cooked finely chopped broccoli, capsicum, pineapple, cheese and chilli flakes. I cooked it at 240C for about 20 minutes til the cheese was golden brown. Bellissimo!

On the stereo
The best of: Blur
Posted by Johanna GGG at 22:10