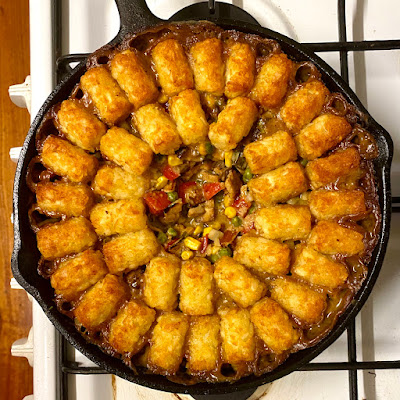 It seems that when I say Pomme Noisettes, many people don't understand.  They seem more commonly referred to as Tater Tots (as the Americans say) but we always called them Pomme Noisettes as a child.  In Australia now they are marketed as Potato Gems.  They were such a great treat as a child and recently seem to have come back to popularity.  This potato gem skillet casserole appealed for that nostalgic appeal and also because it looked beautiful and appealing in the way it is presented. 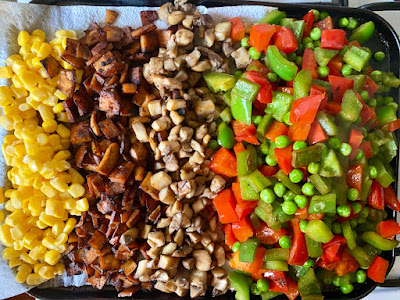 The recipe I had in mind that I had seen a few times was potato gems arranged over a tomato and chorizo stew.  It was one of those recipes I saw everywhere until I went looking for it.  It was not ideal as I wanted to use my cast iron frypan and I have read that tomatoes and other acidic foods are not great for the cast iron.  Instead I decided to make a creamy stew of beans and vegies. 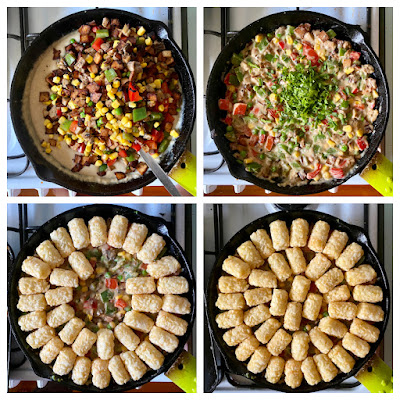 Then Sylvia expressed interesting in it but she wanted to have tofu bacon instead of beans and we worked out which vegetables suited her.  I found a few vegetarian recipes for inspiration (Inquiring Chef, Holy Cow, Kitchen Confidante).  I fried the tofu bacon, mushroom and capsicum in separate batches.  I added in the corn and peas and added them to a creamy cheesy sauce.  Sylvia enjoyed helping with the preparation, especially arranging the potato gems on top of the stew. 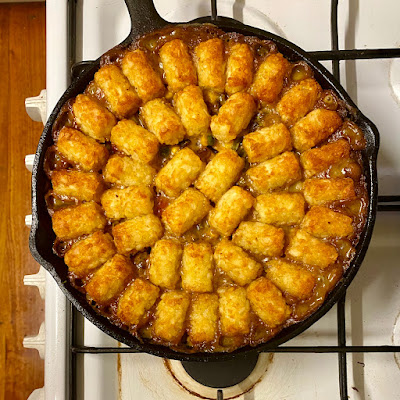 I made these about a month ago on a warm day but it was still a wonderful feeling to take the frypan out of the oven and revel in the golden potato gems with creamy stew bubbling up between them.  We both enjoyed it for tea, though I think I enjoyed the stew more than the yummy potato balls.  It was all the better because there had been a shortage of potato gems in the supermarket when we had been planning it.  The excitment of finding them eventually in a supermarket further away than our usual, was almost as exciting as tasting the hot bubbling creamy potatoey stew.

Prepare tofu bacon and vegies:
Separately fry tofu bacon (if not already fried), then mushrooms, then capsicums in oil in cast iron pan.  Set aside with peas and corn.

Make the sauce:
Melt butter (it melts fast on cast iron) and stir in flour in cast iron frypan.  Stir over low heat for a minute or so until the roux smells cooked.  Slowly add in milk, stirring frequently to make sure the mixture does not get lumpy.  Once all milk is stirred in, increase heat and gently bring to the boil.  Stir in cream cheese and grated cheese until melted.  The sauce should not be too thick so we can mix in add-ins.

Assemble and bake:
Stir vegies and tofu bacon into cheese sauce.  Arrange potato gems on top to cover the creamy sauce.  Bake for 45 minutes until gems are golden brown.  Leftovers can be kept in the fridge in a tub and heated up over a few days.