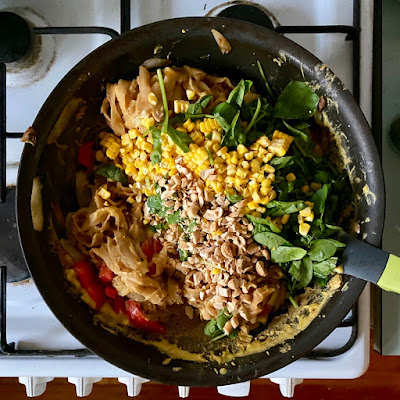 One of my recent memorable meals I had at a restaurant was after my work Christmas party when I ate Pad Thai.  It had been so long since I had this comforting slurpy noodle dish that I was inspired to try it at home.  I attempted Pad Thai many years ago but generally prefer it in a restaurant.  It seemed a long time since I had the opportunity to eat out, especially with lockdown last year.  I had bought vegan fish sauce and this seemed a great time to try it. 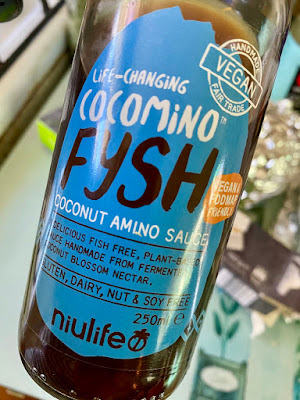 Here is the Cocomino vegan fysh sauce I bought.  I bought it out of curiosity but then I could not think where I had seen it in recipes.  I seemed to see it regularly until I bought it.  In fact, I wondered why I had it until I had a yen for Pad Thai.  I have never tasted fish sauce before (although I am sure some restaurant has snuck it into a meal at some time) because it was not popular until after I went vegetarian. 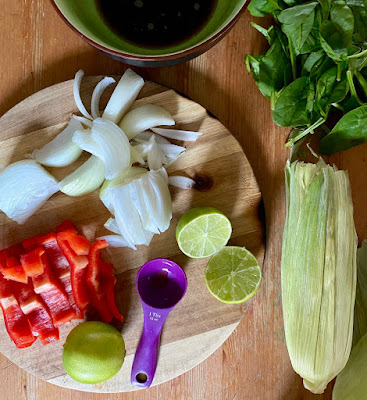 When I recently had Pad Thai at the restaurant in December, I was pleased that I was asked if I wanted egg.  This showed that they were serious about serving vegetarian and vegan pad thai.  I had tofu instead of egg.  I tried it at home in late December with tofu.  But then I wanted to try it again and I forgot about buying tofu. 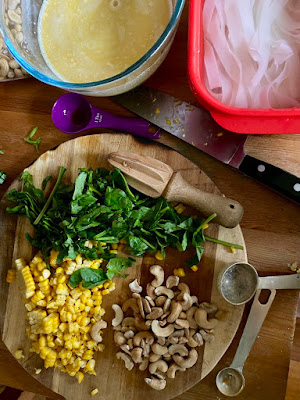 I did a search for an egg substitute and found a besan (chickpea flour) omelette used in fried rice.  I often make a tofu-besan omelette but this was more like a chickpea scramble made with besan.  As I usually have besan in the fridge, I liked the idea of having the idea for when I didn't have tofu. 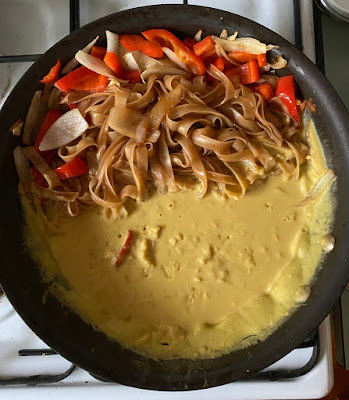 I roughly followed a recipe from Pinch of Yum.  But they directed to cook the vegies and set aside.  I love meals that are made in one pan so I just moved the vegies to the edge because I used a large frypan.  When I added the besan mixture I was a bit worried it was too liquid but gradually it started to thicken into lumps.  I didn't quite have all the vegies I would have wished for.  Hence I used corn rather than snowpeas which I would prefer.  The end result once I stirred through the omelette was quite a sticky gluggy mess but so glorious and delicious. 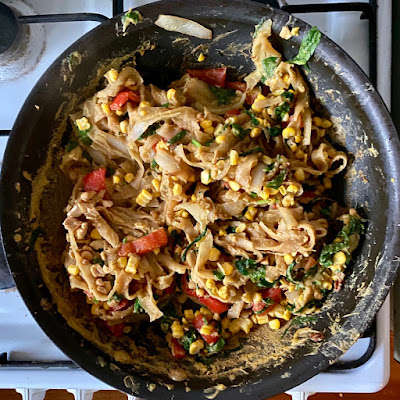 Now despite my good intentions and having taken a few weeks leave, this is likely to be my last post for January.  I had planned to write more posts but am waiting on a new computer and have been finding more time (and satisfaction) in reading novels and playing suduko.  However I wanted to share some links I had found while surfing online, some of which are end of 2020 links and really need to be shared in January before it is February and we have to face it that the year has well and truly begun:

World Wide Waste by Gerry McGovern - an overview of his new book about how much energy is consumed by digital technology and how to rethink the relationship between websites and the environment.

Watch Andrew Rannells and Jimmy Fallon recap a dumpster fire year in 2020: the Musical.  If you are missing going out to see musicals, this is fun spotting the musical references and a hilarious way to recap 2020 in 8 minutes!

We go together - Boris Johnson and Donald Trump - this is not a new video but I only saw it recently and had a good laugh because I watched Grease a lot as a kid!  But prepare also to be disturbed!

My life is on hold, frozen at the moment my son died in the Beirut blast - Sarah Copland in The Guardian.  Amazingly thoughtful, articulate insight into grief on a the sudden death of a child.

Mark Reason: Novak Djokovic is not the only one a few strings short of the complete racket - stuff.co.nz - the tennis players arriving for the Australian Open who are not happy about quarantine need a reality check

Horned Capitol rioter goes viral again after mom says he wont eat non-organic jail food (kutv) - the social media tweets about this are worth the read!

The truth about January 26 by Henry Reynolds in The Age newspaper - a great insight into the injustices of the settlement of Sydney that still haunt and hurt Indigenous people today in Australia.

Soak the Pad Thai noodles in cold water while you work on the rest of the meal.

Stir together the sauce ingredients and set aside.

Mix up the besan omelette ingredients and set aside - it will seem very watery!

Heat oil in a wok or large saucepan over medium high.  Fry sliced brown onion and red capsicum for about 3-5 minutes until soft.  Push to the side of the wok or frypan.  Drain noodles and add to wok/frypan with the sauce.  Cook a few minutes or until the sauce thickens to coat noodles.  Push noodles to the side of the wok/frypan and pour in the besan omelette mixture.  Cook until the besan omelette starts to get lumps of besan mixture.  Mix in the noodles, onions and red capsicum.  Add and mix in the snowpeas, spinach and cashews.  Serve hot.  Can be kept in the fridge a few days.

NOTES: I make no claims to this pad thai being traditional.  Variations on the vegetables could include zucchini, corn, Asian greens such as bok choy, bean sprouts, grated carrot, cabbage.  I like the suggestion on Pinch of Yum that you sprialise the carrot and zucchini.  The besan omelette could be replaced with tofu or tempeh but you would not get the same coating on the noodles.  If you don't have vegan fish sauce you could try something like ponzu sauce or ume plum vinegar to get the salty sour flavour.  This dish would be even quicker if spring onions are used because they can be added with the spinach.  I use cashews instead of peanuts because we don't have roast peanuts in the house due to a peanut allergy.

On the Stereo:
Life's a Riot spy vs spy: Billy Bragg