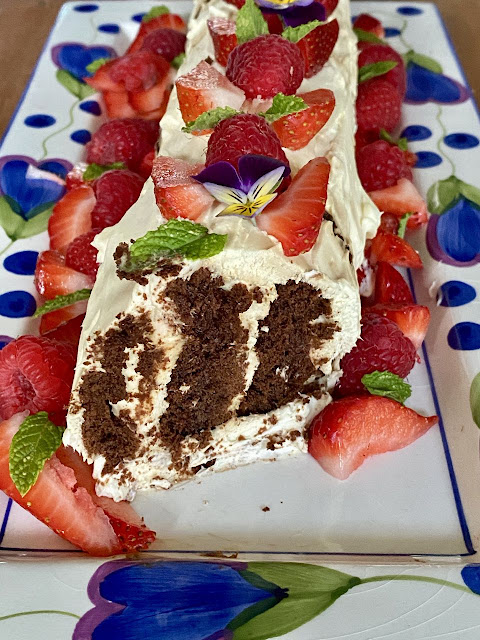 For some time I have been promising Sylvia I would make her a chocolate ripple cake.  And somehow on New Year's Eve it came to be.  I feel somewhat ashamed that I had to look up a recipe.  This is a classic Aussie dessert that is just whipped cream and crisp chocolate ripple biscuits that have some time to get to know each other and work their chemistry.  I just needed to make sure I had the right proportions. 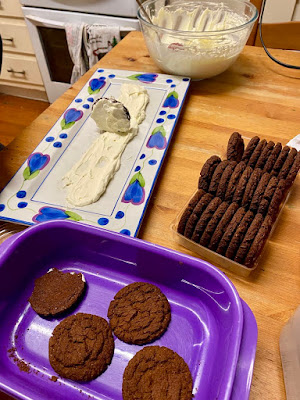 The Australian Chocolate Ripple Cake seems similar to the icebox cake in the USA or tiramisu in Italy.  They are so easy to make and yet can be very impressive.  Some very tired and busy woman must have invented it.  Or someone who knew that women needed a break in the kitchen.  Or (if you are feeling cynical after seeing the depths that politicians can stoop to in the USA) just some company man trying to sell more biscuits.  These cakes were often present when I was a kid and went to an event where everyone brought a plate (that means brought a plate of food).  Today they are still popular. 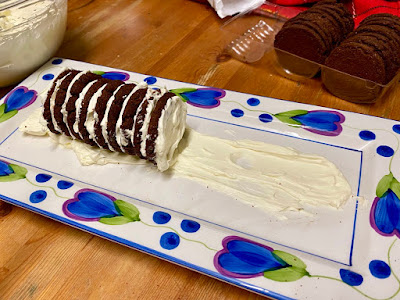 There are many variations.  My mum says she likes it with biscuits dipped in alcoholic drink (not sure which one).  My sister who has recently been diagnosed celiac made her own gluten free chocolate biscuits.  And you can find different versions online using flavours such as Espresso or Baileys Irish Cream.  As we often have peppermint crisp on pavolva, I think a version with peppermint crisp in the cream would be great! 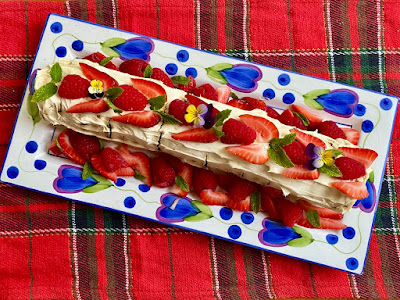 It is a while since I have had chocolate ripple cake.  The cream firms up in the fridge and ask it soaks into the biscuits.  I quite like how the crisp biscuits soften but I am not a fan of all that cream.  Both Sylvia and I loved eating the berries with the cake.  As you will see in the top photo, it is important to cut the cake on the diagonal to get the stripey look.  I was pleased to find a place to feature my johnny jump-ups (little pansies) which we bought in a pot in 2019.  Last year they seemed to have died off but I kept watering in hope and not only have the returned in their pot but they have jumped into a few other pots.  The little flowers look great in the garden and as a garnish. 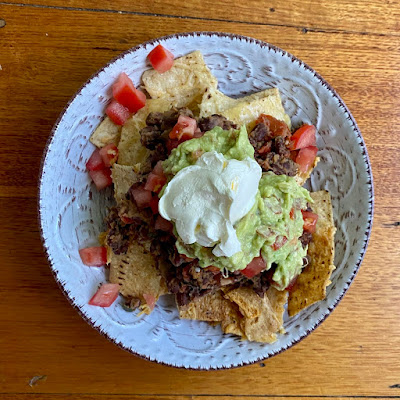 For mains we had nachos.  Usually at New Year's Eve we have vegetarian haggis on nachos but I was a bit absent-minded and forgot this.  I had some refried beans in the freezer and used these.  As with the low-energy dessert, I also went for the path of least resistance in making dinner.  2020 was not a year to push myself to any great culinary heights! I did make the guacamole but just chopped up tomatoes instead of salsa and topped it with sour cream.  Easy peasy lemon squeezy and tasted great! 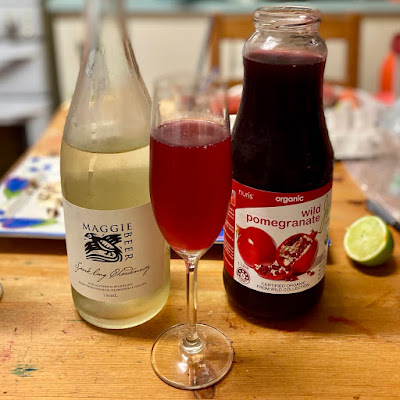 I had decided to make a non-alcoholic version of Nigella's pomegranate fizz. It was a mixture of pomegranate juice, lime juice and sparkling muscat wine.  When I went to Dan Murphy's to buy a bottle, I got some good advice on it but I had not looked at the recipe.  I bought a Maggie Beer sparkling non-alcoholic chardonnay but my mum pointed out this is dry and the wine Nigella used was quite sweet.  So I was not that fond of the fizz.  Much nicer was mixing the chardonnay with peach puree using very ripe peaches from my friend's tree. 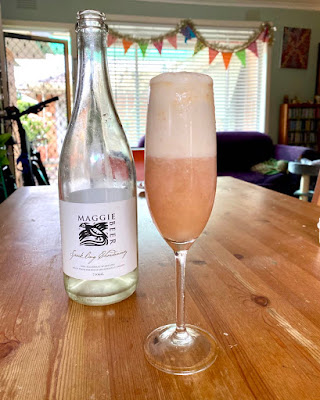 We had a very quiet New Year's Eve in front of the telly.  The day before the government had changed restrictions from 30 people in a private home to a maximum of 15 people and I was wondering if it was worse to be uninvited or to have to do the uninviting.  It wasn't a year for a big celebration with corona virus hotspots breaking out around the nation, borders being closed at short notice and much uncertainty.

But as we have done the last few years, we went to Torquay back beach on New Year's Day.  It was quite cold and windy.  Sylvia preferred to stay on the grass.  Once I got over the nip in the water, I could have just stayed in the sea forever with the waves washing over me. 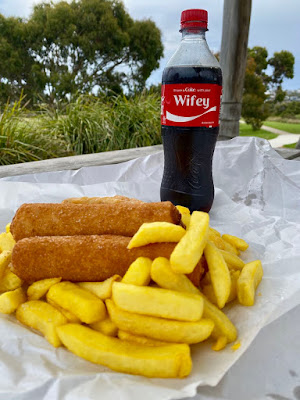 We went to the Bell St fish and chip shop for dinner.  Though I think we just had a late breakfast so dinner was at 4.30pm.  In previous years we have been part of a long queue snaking through the shop and out the door, with lots of people sitting about the shop waiting for their order.  This year it was quieter - possibly because we were so early - and covid friendly with a limited number going into the shop with a mask on to order and then waiting at a safe distance from the doorway for their number to be yelled out of the shop.

We had corn jacks, potato cakes and chips.  I really loved them, though the chips were alarmingly yellow.  We bought a bottle of coke and I was surprised to see it had a label saying "share a coke with your wifey".  I didn't think anyone said wifey other than Scottish people talking about the wee wifey.  We stopped on the way home to say happy new year to my parents and then drove home, tired and happy.  It was a great way to start the year!

Use electric beaters to whip cream, icing sugar and vanilla to stiff peaks.  Spread a slick of whipped cream along a long serving platter.  Spread cream on one side of a chocolate ripple biscuit and place on the cream.  Spread another biscuit with cream and press against the first biscuit.  Repeat spreading cream and pressing biscuits into the cream slick to make a long line of them.  Then slather the line with remaining cream until you can't see any biscuits.  Chill in fridge for at least 6 hours or preferably overnight.  Before serving arrange berries and mint leaves on the cake and around its base.  To serve, cut in diagonal slices to make sure you get stripes of biscuits and cream.

On the Stereo:
A short album about love:  Divine Comedy