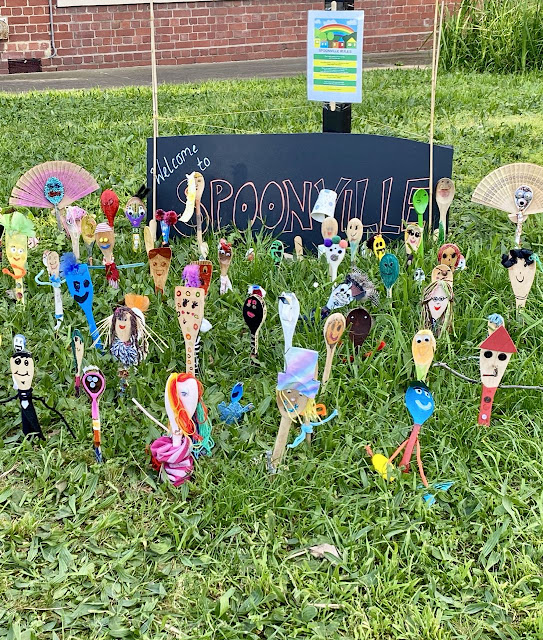 O frabjous day! Callooh! Callay!  The kids are back at school on Monday!  So much to celebrate!  The excited sounds of kids voices in the playground.  Little heads together whispering secrets.  Awkward limbs skeetering around each other.  Teachers able to see puzzled faces in the classroom (they don't show on video conferences).  And parents working at home in peace!

It seems quite amazing after almost three months of remote schooling to have (most of) our kids returning to the classroom in Melbourne.  But as with previous lockdown, I will miss seeing so much of what Sylvia is doing in class, especially the art and craft.  So I have collected together photos of some of the craft she has done both in class and leisure ad a few that I did with her. 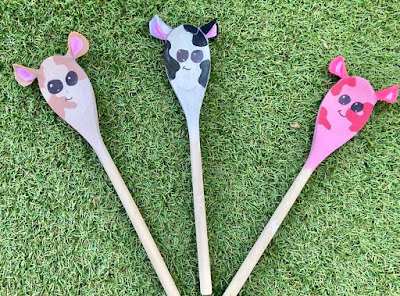 The craft project of Melbourne lockdown 2.0 was Spoonville.  It is fun, creative and a great way to connect communities.  I had bought some new wooden spoons before lockdown 2.0.  It took us a while to get to it but we had plenty of time.  Finally we got out paints and Sylvia painted hers as cows: strawberry, caramel and oreo. 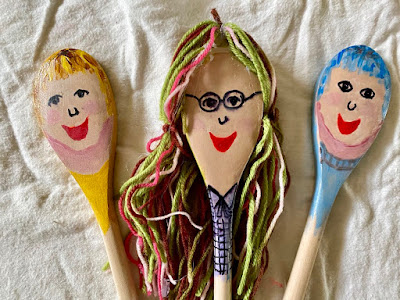 I painted three kids.  As well as paint I used some sharpies (textas) to draw on the faces.  When I found  varnished mine with clear nail polish that it makes the ink weep.  But apparently it helps when spoons are outside in the weather.  Sylvia's school had a spoonville which we were happy to add to (see top photo). 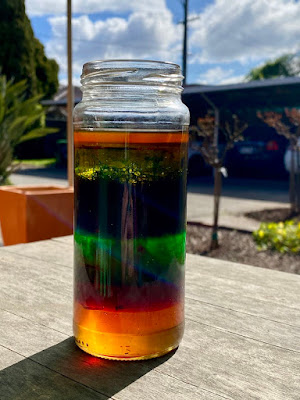 This is technically science.  But, as our government fails to see in their recent higher education bill amending the costs of subjects, science and arts aren't so very different to each other.  They can inspire curiosity and awe in all sorts of ways.  The idea was found in this list: 50 genius STEM activities for kids. 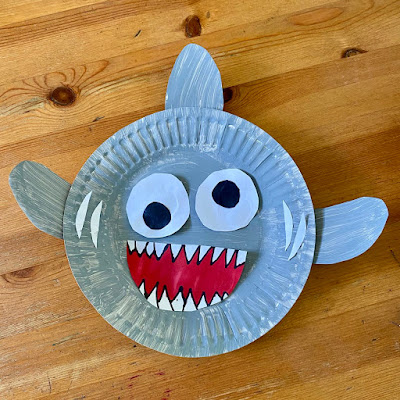 Sylvia got lots of ideas from the internet but that does not take from her creativity.  Even to be able to copy what you see, requires some talent and often it has your own style. I loved this baby shark she made from a paper plate. 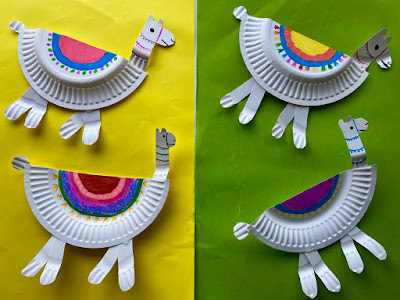 Llamas are all the rage right now.  These paper plate llamas are easy and pretty cute. 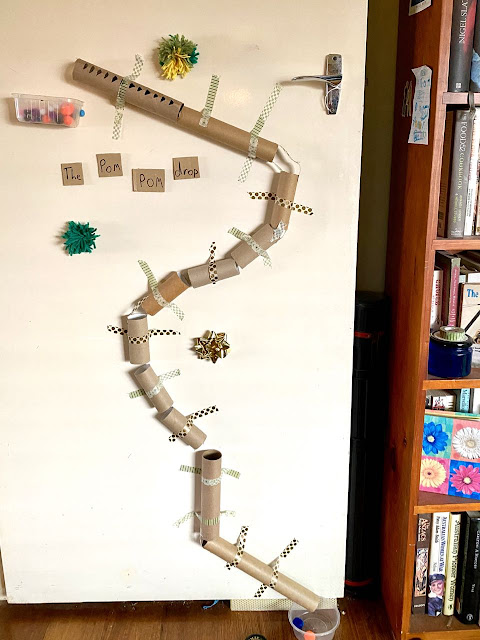 One of the activities that delighted Sylvia the most was this pom pom drop.  In lockdown it is not easy to find the right equipment.  We were really happy this required very little - cardboard tubes, washi tape and mini pom poms.  Sylvia had a lovely time positioning the tubes on a door so she could drop a pom pom through the tubes. 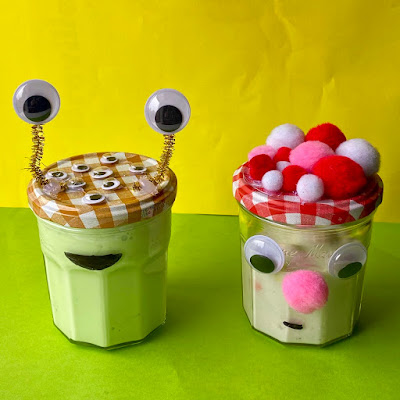 Some might remember that last year Sylvia got into a slime phase and made jars and jar of slime.  She finds it very satisfying to play with.  So once she saw it in the list of things suggested, the glue and activator appeared again.  I liked the extra work on these jars with a glue gun, googly eyes, pom poms and pipe cleaners. 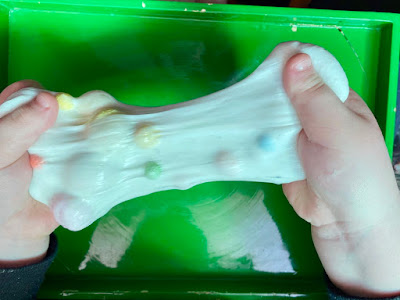 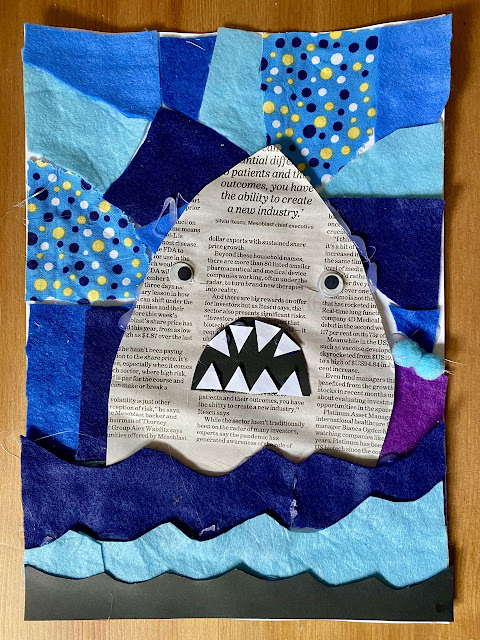 Another shark.  This time a newspaper shark on a felt and fabric collage! 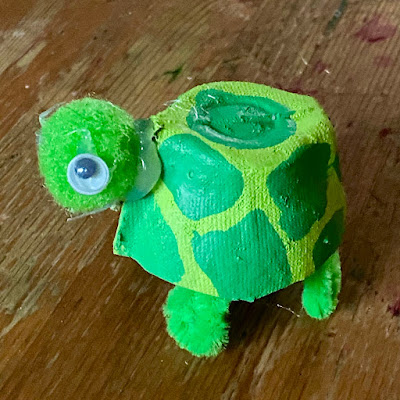 A wee turtle.  Made from an egg carton, pom pom, googly eyes, pipe cleaners, glue gun and a lick of paint. 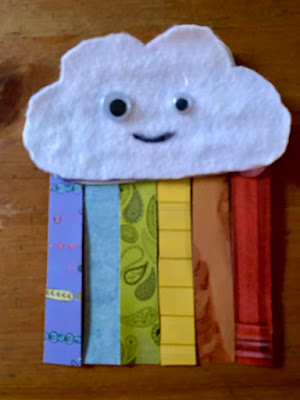 A cute cloud and rainbow made from felt and craft papers. 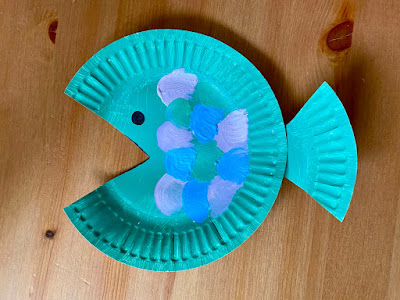 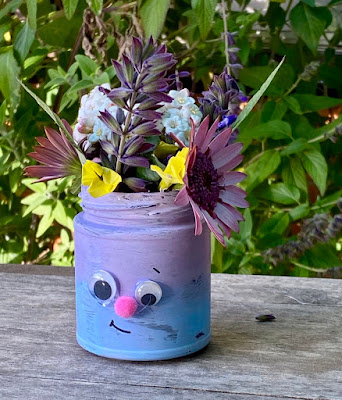 Sylvia painted this ombre troll vase and collected flowers from the garden to put in it. 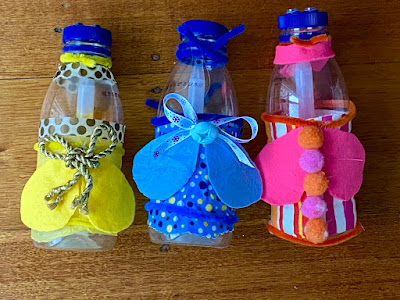 Fireflies made from juice bottles.  Sylvia raided the craft box for different fabrics and bits and pieces. 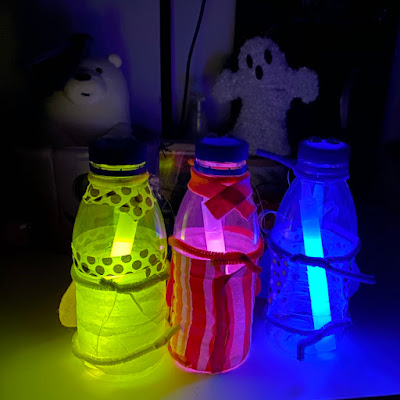 The clever bit about these fireflies is that you can replace the glow stick as many times as necessary.  They would be fun for sleepovers when Sylvia is allowed to have them again! 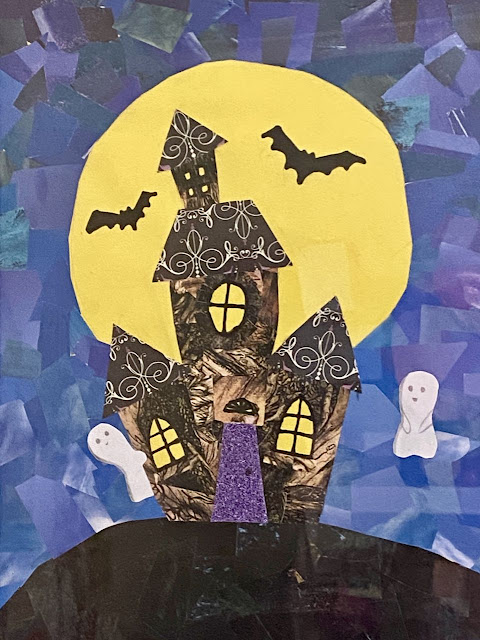 Sylvia is already into Halloween so when I had an urge to do a collage out of old calenders, we agreed on a haunted house.  I did the house and she did the ghosts. 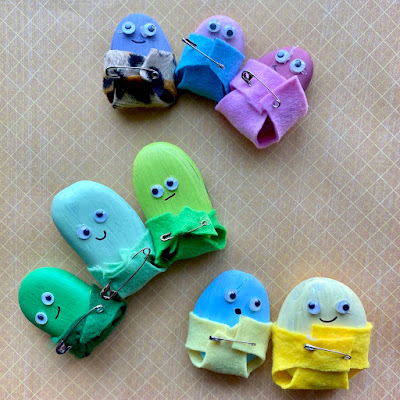 Lastly, Sylvia decided we needed rock art before lockdown 2.0 so we bought these at Bunnings hardware in the pouring rain.  Finally the paints came out, along with some googly eyes, safety pins and felt scraps to make rock babies.  Pretty cute, eh? 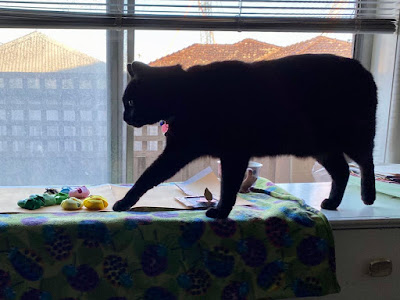 And, as you might imagine, our cat, Shadow, is always curious with the craft.