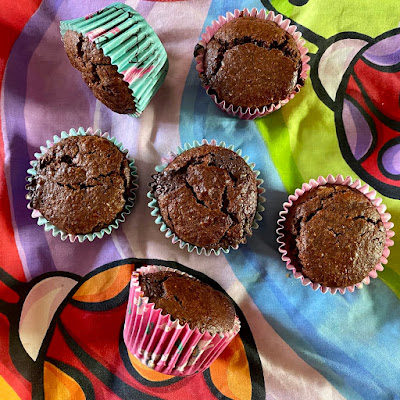 The last week has been full of ups and downs.  At the start of the week in Victoria we were so pleased to be doing well and looking forward to more easing of restrictions.  Then the Corona Virus numbers started going up each day.  We were told that instead of restrictions easing, they were tightening up again.  We made these chocolate muffins at the start of the week but like our luck, they ran out too quickly! Here is a photo of the only meal I have had out since lockdown restrictions eased in May.  My work group had a meal at Naughtons Hotel in Carlton in the first blush of excitement at opening up and getting our of our houses.  I had a superb main meal of "Roast vegetable wellington, mushroom duxelle & butternut, kale, pepitas" ($28).  We also shared some "thick cut chips, Gruyere cheese, Romanescu" and mushroom and preserved lemon arancini with pecorino".  The chips with the creamy cheesy sauce were a wonderful accompaniment to the vegies in pastry.  I also had an excellent Seedlip Garden, elderflower and soda to drink.  I have not heard of Seedlip before but now I am curious to know more about this non-alcoholic distillery. 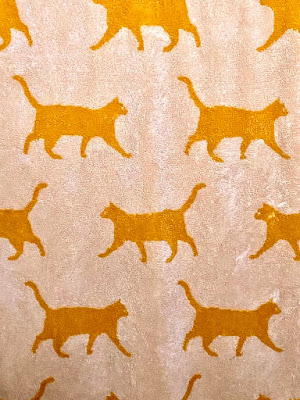 This cat towel was purchased at Northland shopping centre.  I went out there with a friend when the diagnoses were so small that we were feeling safer.  I really went there because I wanted to get a vinyl patching kit for a hole in a vinyl chair.  You can see it below.  On the trip a seatbelt in the car broke so I needed it to get my car serviced and the seatbelt fixed. 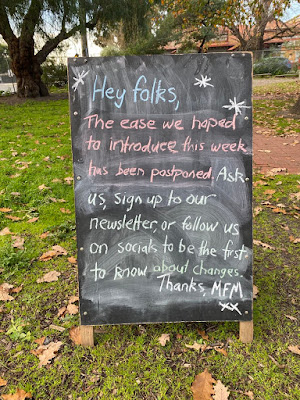 My part of Melbourne has been linked to the hotspots but then when they narrowed down to suburbs, my suburb was not named.  It was a relief but instead of opening up more, we are told during the week that restrictions get tougher again.  We are going backwards.  Now Northland is linked to a Corona Virus cluster.  And politicians in other states are telling people to avoid people from Melbourne.

Check out Sammy J's satirical video to see some gentle fun poked at Victorians by one of our own.  And the Sydney Morning Herald newspaper had a go at us today, saying that security at NSW rugby matches would be checked for Victorian telltale signs "such as ankle pants, fedora hats, fixed-gear bicycles, vinyl record players, political ideals and Victorians’ uninhibited embrace of their own cliches."  Yes the other states are enjoying more easing of lockdown and having a dig at Victoria!  And the sports fans are sad that they are having to wait longer to go to footy matches.  (Rugby!  Who watches that?) 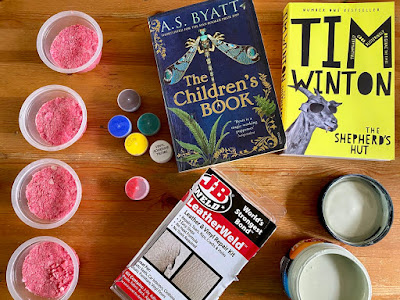 The timing of the outbreak of Corona Virus is unfortunately happening as the school holidays start this weekend.  It is hard to know what we can and can't do now.  It seems back to working around the house, reading and craft projects.  Sylvia was so excited about the last day of school followed by a sleepover that she made these bath bombs  before I got up yesterday (and had even cleared up after herself, which is even more amazing!)  I have been to get more paint made so I can paint over some patches on our walls and finished patching the vinyl today.  I wish I could say I was flying through The Children's Book but am a bit slower than I would like.  But I hold great hopes for my week of annual leave coming up. 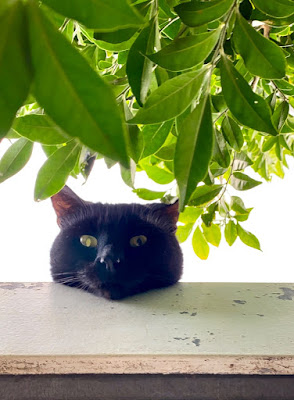 Our cat, Shadow, is not only able to amuse us (as you can see in the photo above from today while he played on the carport roof) but also loves to snuggle close by.  He has curled on the sofa next to me while I have been watching a few films lately.  Our local ABC iview has lots of Australian films available for free.  Sylvia and I watched Muriel's Wedding which is a part of our culture ("you're terrible, Muriel").  I watched Goldstone which is an impressive example of what a Western would be like in Australia.  And tonight I watched the Goldfinch (on Netflix), which we were going to watch with my bookgroup but never got around to.  It lacks the richness and depth of the novel but feels every bit as long! 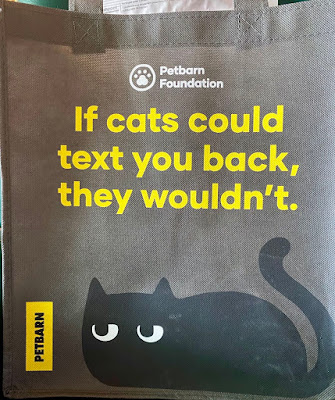 So you might not be surprised to hear that by midweek I was feeling tired of it all.  Tired of sanitising my hands everywhere I went.  Tired of all the handwashing.  Tired of discussions of masks and tracing apps.  Tired of the paranoia.  Tired of hearing about people's experience of being tested for corona virus with a big stick up the nose.  Tired of forgetting to pick up Sylvia from school (it was only once but I better not do it again).  Tired of being told not to go anywhere if you have a runny nose even though I have had a runny nose most days of my life.  Tired of seeing my colleagues who need to return to work having to battle with bureaucracy.  Tired of wondering what statues will remain standing.  Tired of the racism in our world.  Tired of worrying about what the future holds! 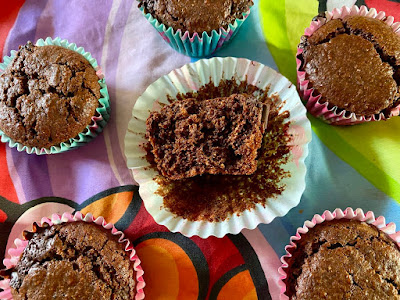 I wish I had more of these muffins.  Sylvia found me a recipe when I said I wanted to make chocolate muffins.  But I had an egg white in the fridge so used that instead of the second egg.  Then I added chia seeds and then I was out of wholemeal flour and there was none in the supermarket so I added some wheatgerm.  So they ended up slightly healthier.  I am a great fan of wheatgerm and chia in bakes.  I don't know why I don't do it more often.  They were great comfort food but also a little bit more satisfying.  Sylvia thought they needed to be warmed but I was happy to eat them at room temperature.

I was going to write this post when I was feeling a bit low but I am feeling better now.  I wish I could get out more but chocolate muffins and good films have helped.  One thing that has helped is to know that as soon as our diagnoses start to rise, that our politicians are looking after us and fighting the virus.  When I look around the world, I am glad that when our daily diagnoses hit the thirties, that it is taken seriously.  And that gives me hope!

Preheat oven to 180 C and line a 12 cup muffin tin witht 12 muffin paper cases. Mix dry ingredients in a medium large mixing bowl and the wet ingredients in a small mixing bowl.  Pour wet into dry and mix until combined.  Mix in chocolate chunks.  Spoon into muffin cases.  Bake for 20-25 minutes until a skewer comes out clean and the muffins smell cooked.  Cool on a wire rack.

On the Stereo:
Just enough education to perform: Stereophonics
Posted by Johanna GGG at 22:47