University of Melbourne places to eat 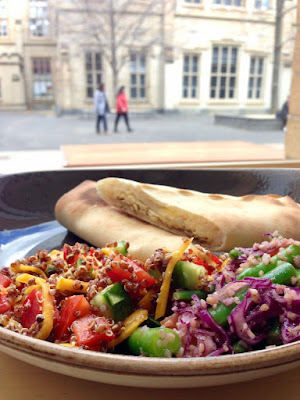 The University of Melbourne is a favourite place for me in Melbourne.  I studied there after school and have worked there on and off.  Since writing about the unimelb food in 2012 there have been some changes but also some constants.  I miss the food co-op and the calzone place but am pleased the crepe stand and Animal Orchestra are still going strong.  Today I will share some more foodie photos from the campus taken over quite some time because I don't get out and about there often.

Above is a Middle Eastern fusion style cafe in the Union Building called Ho Hos.  I really enjoyed this warm cheese and vegemite pie with two fresh salads with quinoa and lots of cabbage, green beans and tomatoes. 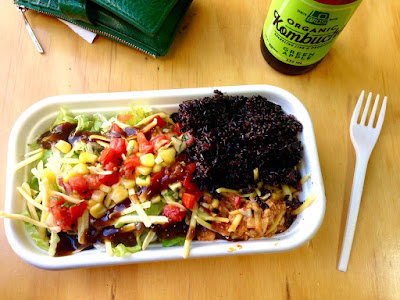 Zambrero, a franchise tex mex cafe, is a popular place in the Union Building if the queues during O Week are anything to go by.  They are not the cheapest place on campus but provide a substantial meal with lots of vegies.  The best and worst thing about Zambrero is all the choice.  You choose a basic burrito or bowl and then walk along the counter being asked what you want for fillings, salsa, sauces etc.  I love the bowls and I think this photo is of a IQ Bowl with black rice, lettuce, beans and cauliflower, cheese (they do vegan cheese), corn and tomatoes with goodness knows what sauce.  And kombucha. 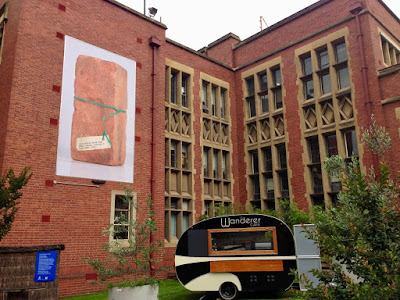 This is one of the places that comes and goes.  I really liked this little Wonderer caravan at the top of Monash Road but it has been replaced by a more permanent cafe now.  Unfortunately a lot of the little pop-ups around the university they are big on coffee and light on seating.  As I am not a coffee drinker and when I do get to a little cafe around the uni I often want to sit and eat, I don't visit the pop-ups so often.  Though I do like the bagels at the Standing Room. 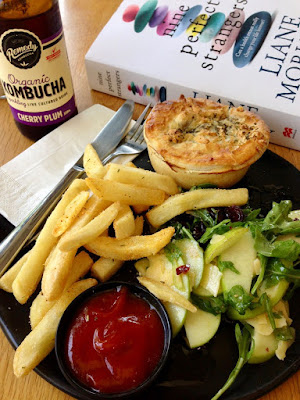 Dr Dax Kitchen is a newish cafe on Royal Parade.  I love that they are on the corner of Genetics Lane.  They are a proper sit down cafe with lots of space for group meals.  There is a table menu, soup of the day, salad bar and a cafeteria style bain marie.  I love how they have some coloured rolls (like a vivid pink beetroot bun in a salad roll).  However it is a bit hit and miss.  When I last visited, none of the hot foods appealed so I had a cauliflower cheese leek pie with an apple, rocket and cranberry salad and a some hot chips.  It was the perfect warm meal to eat while I caught up on reading. 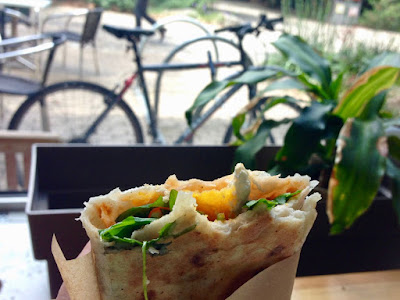 Another lunch I enjoyed at a more casual place is Professors Walk beside the Bailieu Library.  Of course in my student days we spent a lot of time at the library because no one had heard of the internet and there weren't fancy cafes like this about.  Not that it is terribly fancy by today's standards.  But I enjoyed the punpkin and feta wrap on a quiet day out of semester time last year. 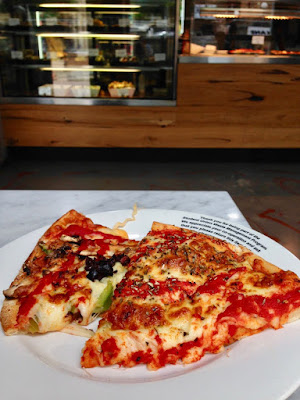 I apologise for the photo from Pronto Pizza in the Union Building.  I like the place far more than the photo would suggest.  I have been to functions where Pronto Pizza cater and the pizza is amazing.  It is always popular with the students.  There is a fantastic vegan pizza with a garlic infused olive oil base, broccoli, roasted peppers, caramelised onion and sauteed potatoes.  They also do gluten free bases.  However the pizza in the photo above was a slice from the bain marie of a vegetarian pizza with vegetables blanketed by tomato sauce and mozzarella.  It was good but I have enjoyed their freshly baked pizzas more. 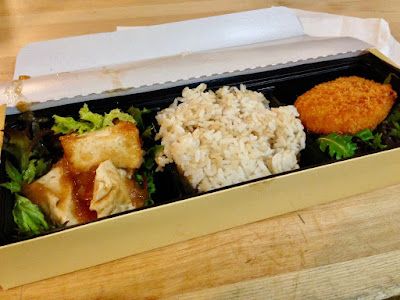 More recently I have tried Egg Sake Bistro in the basement of the Union Building.  It often has queues but I was curious after some people recommended it.  I had thought I was getting a bento box or a curry don bowl but I seemed to have a choice of three dishes and the vegetarian ones weren't clearly marked or there weren't many.  I had teriyaki tofu, rice and a crumbed and fried potato.  It was a little stodgy even with a few salad leaves.  Not quite what I had hoped.  I did notice as I left that the opposite counter had spring rolls in a sushi handroll which I really wanted to try because it sounded so odd.  Maybe another time I will get along there.  And I keep hoping there are some more substantial meal to be had there. 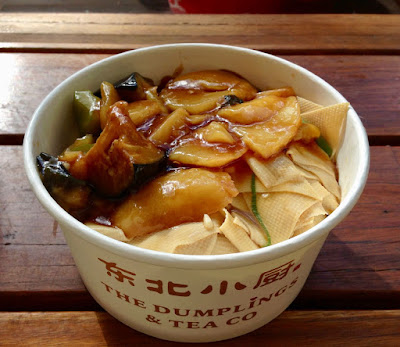 I also recently tried the Dumpling and Tea Co near North Court outside the Union Building.  I had two dishes with rice.  The thin sliced tofu was not quite my thing but I really loved the fried potato, green pepper and eggplant dish.  It is a cheap and cheerful sort of cafe that is perfect for students and appealed to me more than the other Chinese cafes around the union building which don't seem to do much vegetarian meals of interest. 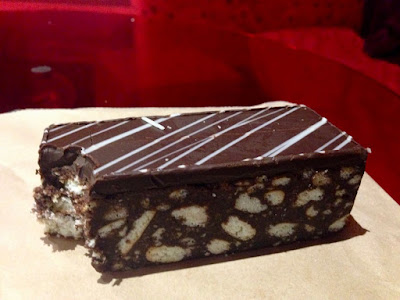 There are a few places selling sweet food.  The hedgehog at Plush Fish is always delicious though the slices are huge.  I also like the choc chip cookies at the french patisserie counter near Boost Juice.  (And Plush Fish does nice sushi but I don't tend to think to photograph it if I have been there.) 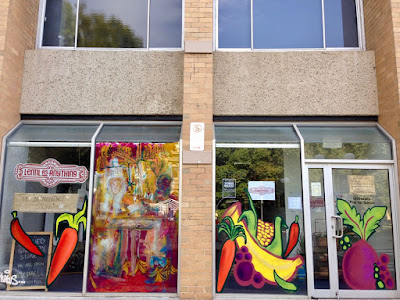 When I saw Lentil as Anything painting the windows of this shopfront in the Union Building I was excited that they were starting a cafe here.  But it seemed to just be a popup selling some produce and I am not sure it is there any more.  The pictures on the window look cool anyway. 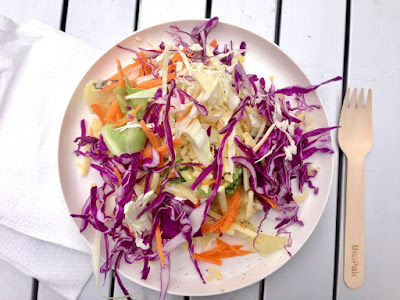 I have already written about lots of vegan meals at the University of Melbourne Farmers Market on Wednesdays during semester.  Above is the vegetarian baked potato with butter, cheese, coleslaw, avocado and sour cream from the Trentham Potatoes stall.  It is just one of the delicious offerings there that I would highly recommend. 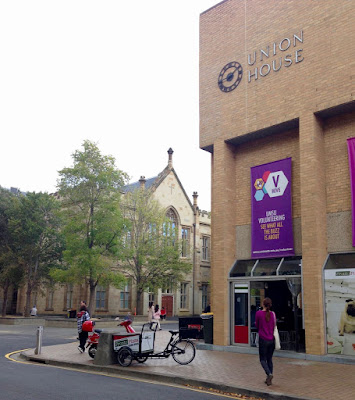 Lastly I am sharing a photo of the Union Building.  It has always been there since my days as a student but it seems it wont always be the Union Building.  Apparently there are plans (in some distant future) to move the student hub from the middle North of the campus to the South East Corner where Grattan Street meets Swanston Street.  It will be sad for me because I have many fond memories of the Union Building (so much good food and quite a few good plays too).  But for now the building remains bustling with students looking for lunch to fuel their busy days.
Posted by Johanna GGG at 22:45