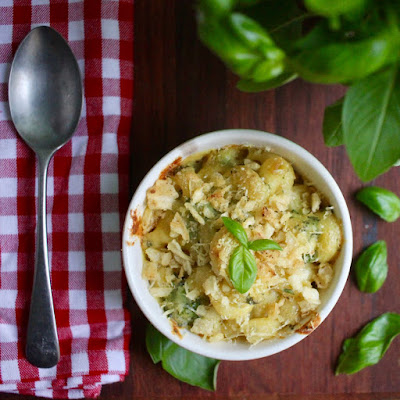 Sylvia brought home a supermarket recipe card for a macaroni cheese with lots of vegetables and asked me to make it.  Wow!  It looked amazing.  However she did not want the vegetables.  So it was really just the usual mac and cheese I usually make.  This called for some compromise. 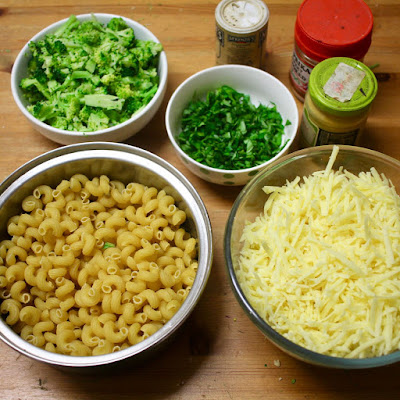 The compromise happened in the supermarket when we didn't have the recipe card with us.  And I hadn't even read the recipe.  I was so sure there was broccoli that I convinced Sylvia to have broccoli and herbs.  I tried to suggest other vegetables (especially onion) and failed to get her interested.  When we got home, I was surprised to find that the recipe (Vegie Packed Mac and Cheese from Woolworths) that we had intended to make instructed to cook and puree cauliflower and zucchini, and then add lots of cheese and beans.  Totally different to the recipe I had in my head.  I went with my head, not the card. 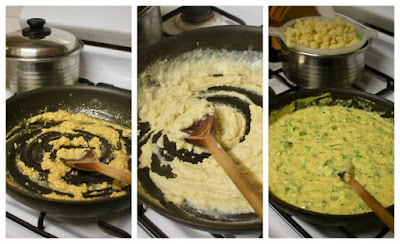 And as I was going with my gut a little too, I hunted out an old mac and cheese recipe from my blog that I had loved.  I made a thick roux (see above left photo) and slowly added lots of milk.  The middle photo above is the roux after adding 1 cup of milk.  It has a few lumps but is pretty creamy without any big clumps.  The above photo on the right shows the roux after it has got a lot thinner, brought to the boil to thicken slightly and then is thickened more with lots of cheese as well as the green addition of broccoli and herbs. 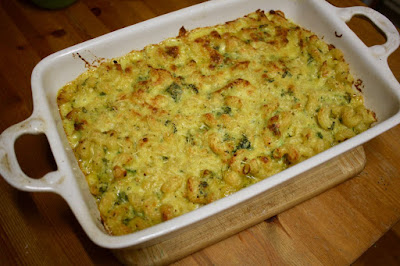 The resulting mac and cheese was really really good.  Just the thing for a wintery evening.  However the flavour was really intense and bit dull.  When I originally served it I had made a cauliflower salad that had probably lifted it.  Alas I wasn't so energetic this time.  My solution, rather than make salad, is that next time I will add vinegar (as is in the recipe) which always brightens a sauce.  I also found it had rather a lot of sauce and wondered if it needed more macaroni (perhaps 100g) and less cheese (up to 100g) but am not sure because it was lovely and creamy. 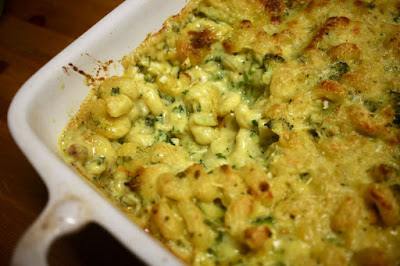 Sylvia loved the mac and cheese, esp the crispy topping but was not so keen on the broccoli.  Just before making it, I had to rush out on my bike to the supermarket for coconut because she had plans to make ANZAC biscuits.  I had promised to get spinach but got to the supermarket without keys to lock my bike so I rushed about and it was so late there was no bags of fresh baby spinach that we like. I returned without it and Sylvia was disappointed.  She reminded me I should have checked for frozen spinach.  She would have much preferred spinach to broccoli so I will try that next time.  (Of course I might have missed my one moment that she was demanding spinach!) 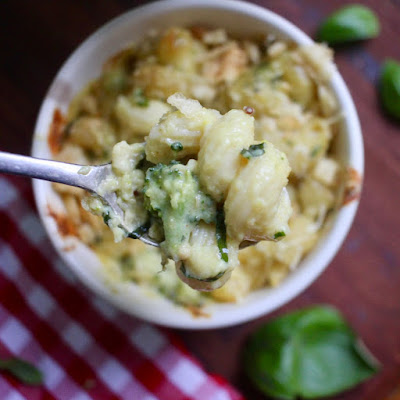 As well as enough to bake in a large dish, I also filled two ramekin to bake the next day.  When I decided vinegar would help the flavour, it occurred that baking crushed salt and vinegar chips on top might lift the flavour.  I had not counted on the topping firming up while uncovered overnight in the fridge.  I sprinkled on some crisps anyway but they would have been better if done the night before when the topping was softer.  On the second day the sauce was less creamy but the flavours had settled overnight and were better.

It was nice to make a mac and cheese a bit fancier than the ones I make more regularly.  It is a meal that is loved by all the in household.  This one was fun with the gruyere and crisps, as well a a little healthier with some greens.  However I was so intent on getting it right that I served for dinner at 7.30 the first night (which is very late for us) and then for lunch the day after at 4pm (a very late lunch).  I suspect next time we might be back to our plain old mac and cheese but it is nice to make something a bit different. 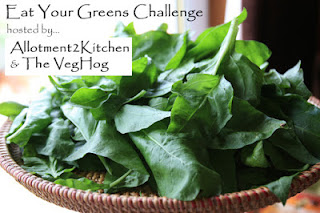 I am sending this mac and cheese to Eat Your Greens, a blog event hosted by the VegHog and Allotment to Kitchen.

Slice broccoli very thin and steam or microwave until soft.

Cook pasta according to instructions.  Once you have it on, start the cheese sauce:

Melt butter in a medium saucepan over low heat. Mix in flour and stir over low heat for 1-2 minutes. Add milk gradually, mixing as you add it to make sure there are no lumps (though it will see lumpy at first. Bring to the boil so that the roux thickens slightly. It does not need to be really thick because the cheese will help it thicken. Add mustard, paprika, turmeric, gruyere and tasty cheeses. Stir in cooked pasta.

Tip mixture into a 13 x 9 inch ovenproof dish. Sprinkle with parmesan and breadcrumbs. If you desire crisps, crush a few and sprinkle over the topping.  Bake at 220 C for about 20-30 minutes or until topping is crisp and golden brown.  Can be reheated but wont be quite as crisp on top or creamy inside as when straight out of the oven.

On the stereo:
Bande Apart: Nouvelle Vague
Posted by Johanna GGG at 22:16