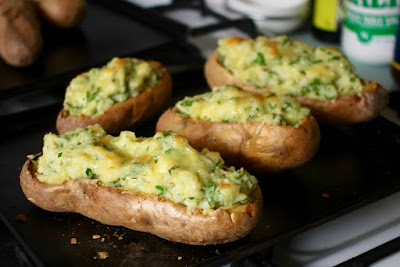 On the weekend we went for a country drive to SpudFest 2019 in Trentham.  We came away with 3 kilograms of spuds.  On Sunday night we had fantastic baked potatoes with butter, sour cream, grated cheese, baked beans and finely chopped purple cabbage.  It was so good but too dark and hurried for a photo.  So I decided to revisit baked potatoes today before a dentist appointment.  When I looked online at how to reheat them the internet presented me with the idea of twice baked potatoes.  Thank you, World Wide Web for a great dinner! 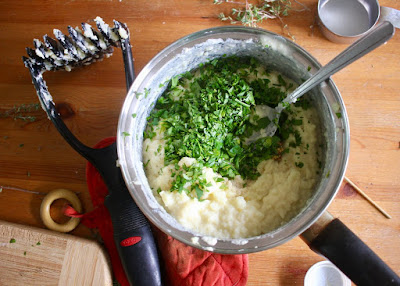 Baked potatoes are fantastic but finding good potatoes to bake at home can be challenging.  SpudFest had such a great range of potatoes to choose.  (If you didn't make SpudFest I recommend your farmers market.)  Twice baked potatoes are the best of both worlds.  You get the crispy skin of the baked potato with the creaminess of mashed potato.  We also had lots of herbs in the garden so these also went in with lots of cheese. 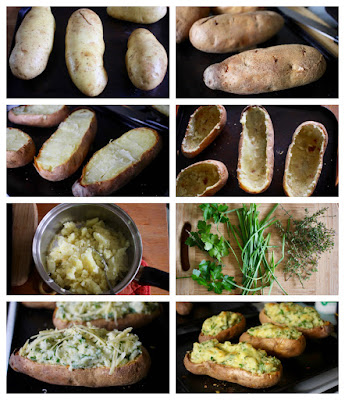 Making the twice baked potatoes were great and reheating them was really easy.  I think perhaps I should make them more for busy work nights because they are so easy to make ahead.  And if you don't have the time to bake them the second time, you could do what I did before I left home and bung them under the grill to crisp up on top and eat them straight away.  I ate mine with refried beans but I think coleslaw is a great classic side to eat with baked potatoes. 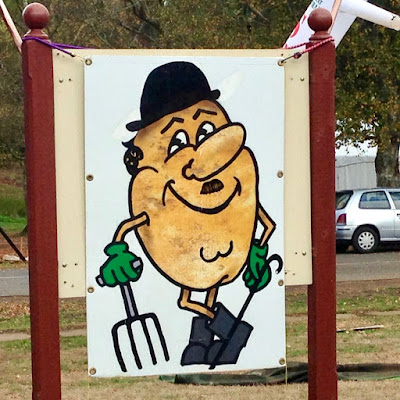 And because the potatoes came from SpudFest, here are a few photos.  We didn't get there til mid afternoon so we didn't get involved in all the activities.  It was a fun visit.  Sylvia is quite into potatoes so we enjoyed all the pictures of friendly potatoes. 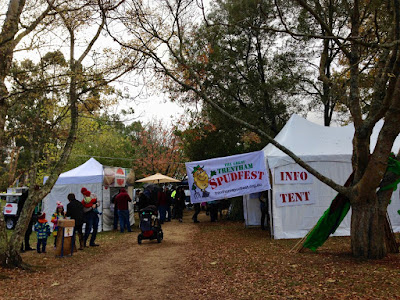 There were a few different areas around Trentham so we chose one.  It was mainly food trucks, live music and a merchandising stall.  The ambience was lovely but when we arrived the weather was quite grim. 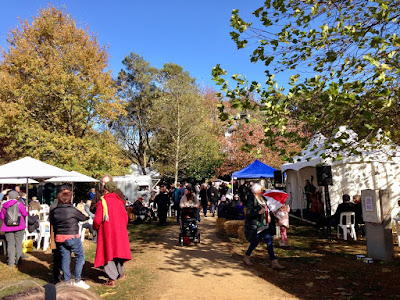 Within minutes it had transformed to a beautiful autumn day.  We had some late lunch: amazing hot crunchy potato waffle chips, some pumpkin soup that was nice but needed seasoning, interesting musk-flavoured ice cream and delicious hot jam doughnuts.  Did I mention my parents came along and my dad loves hot jam doughnuts! 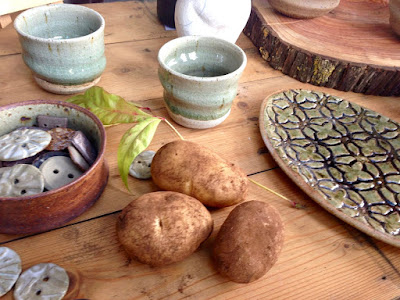 We walked along the high street and were amused to see potatoes in the store displays.  Some were placed among the wares. 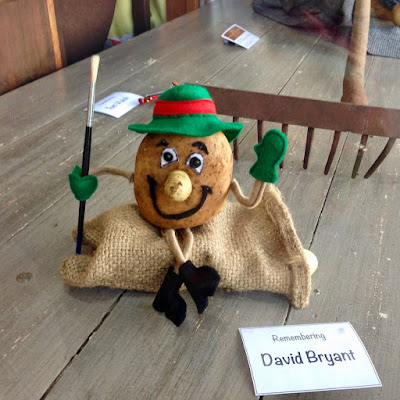 Some potatoes were a little more artistic.  This wee potato is so cute! 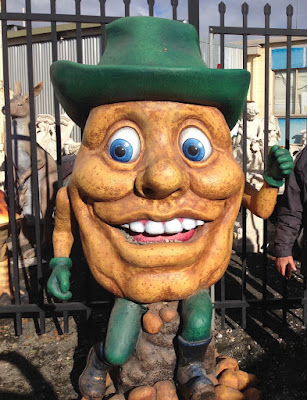 And others were just plain silly but fun.  You can see my dad's hand beside this huge potato statue to show you how big it was.  I didn't take a photo of the man dressed as a potato! 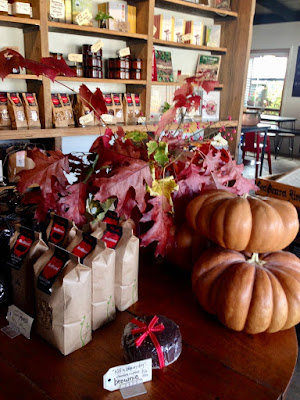 We stopped at the Red Beard Bakery to watch the bakers cut bread rolls with very fancy cutters, to drink lime and mint kefir and to rest indoors out of the cold.  They weren't quite in step with the SpudFest with their pumpkin display but sadly they were sold out of SpudFest Spud Bread. 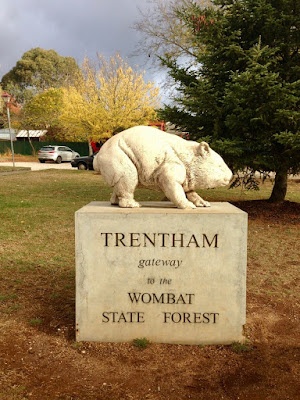 And one last photo that made me smile even though it is not spud related is this wombat statue.  I guess you might say it looks like a misshapen spud.  We left with our sack of spuds and a resolution to return to Trentham soon.

I am sending these twice baked potatoes to Eat Your Greens, a blog event hosted by Allotment to Kitchen and the VegHog. 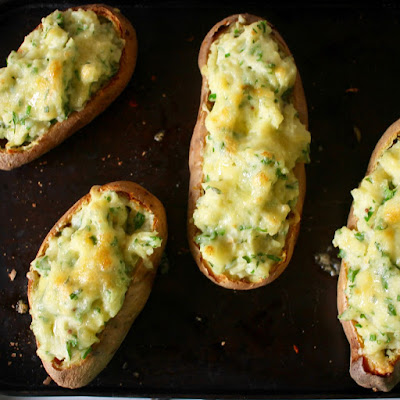 Place potatoes on an oven tray and poke with a sharp pointed knife a few times.  Bake for 1 to 1.5 hours at 200 C.  The potatoes are baked when the skin is crispy and the insides are soft so that a skewer or knife slides in easily with no resistance.  Cool slightly so they are easier to handle.

Cut tops of potatoes off and scoop out the potato flesh, leaving enough in each potato to hold its shape (about 5mm thick).  We snacked of the tops but you could halve the potatoes if you don't want to waste the tops.

The potato that comes out should be quite dry.  Mash it with milk, butter, sour cream, mustard and seasoning.  Taste and adjust seasoning.  Stir well to make it creamy.  Stir in herbs and 3/4 cup cheese.  Spoon back into potato cases and sprinkle with a little cheese.

Return potatoes to the oven for 20-30 minutes or until topping is crispy.  If you are in a hurry just crisp the topping under the grill.  If you want to eat later you can leave for a few hours on the oven trays or keep in the fridge overnight.  If it has been in the fridge, it might take longer to reheat.

On the stereo:
Nightflight: Kate Miller Heidke
Posted by Johanna GGG at 22:34