Tex Mex vegan bowl - and how to make a stress ball 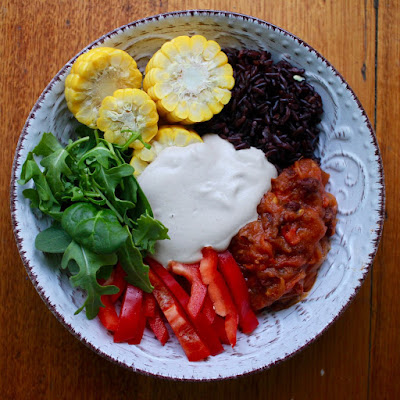 Last night I wanted something fast and healthy.  So I made this Tex Mex vegan bowl.  The cooked black rice was in the freezer, as was some refried beans.  I fried up half a red onion and 2 peeled tomatoes and cooked it with a splash of water, salt, maple syrup, smoked paprika and about 1/3 cup refried beans.  Then I made some cashew cream.  Actually I didn't have many cashews so it was mainly macadamia and walnut but that worked fine.  I added corn on the cob, red capsicum and spinach and rocket.  Really good. 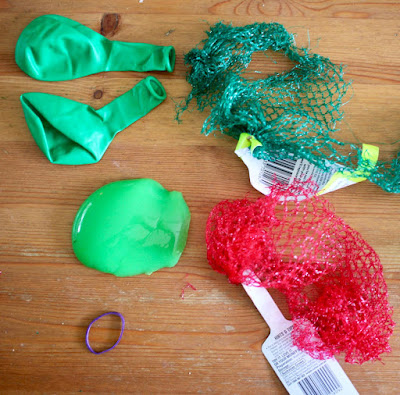 It has been quite a crazy week.  I will never understand why anyone thinks it is a good idea to start daylight savings just before the school term starts.  Obviously it was not decided by someone who had to get the kids back into routine for school mornings after two weeks of free and easy days.  Since daylight savings started last Sunday, we have been having late nights that knock us for six followed by virtuously early nights. 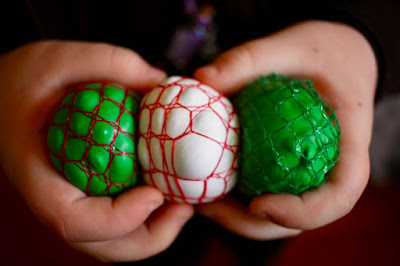 Yesterday morning Sylvia was up ridiculously early.  She decided to replicate the stress ball she had made the previous night.  By the time she left for school she had made two stress balls, cleaned her room and still got there early. 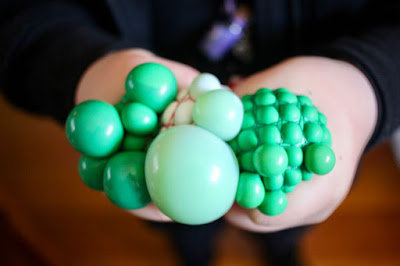 The stress balls were quite easy and a lot cheaper than the ones at the shops.  All she used was a balloon, some slime, some netting and a small rubber band to hold the net in place.  She had seen on YouTube that you put a funnel into the balloon to fill it with slime but we found it worked with me holding open the balloon neck and Sylvia pushing it in with the blunt end of a bread and butter knife.  Once the balloon was full (without stretching the balloon) she tied up the end, then covered it in netting (the sort that vegetables are packed in) and used a small rubber band to secure the netting tightly at the base.

She took the stress balls to school and gave two to friends.  One friend broke her in 5 minutes, Sylvia broke hers by lunchtime and her other friend took hers home at the end of the day.  So these aren't going to last long but neither do the ones from the shops.
Posted by Johanna GGG at 13:29