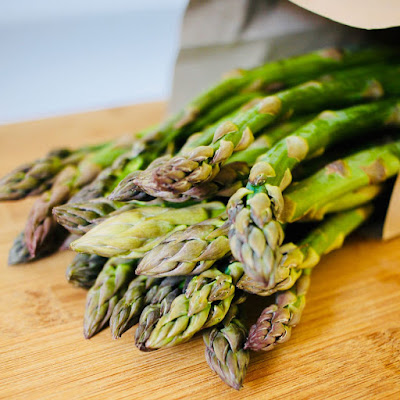 October sees us well into Spring with gorgeous asparagus from the Farmers Market (above).  The weather is warming up though without the heavy spring rains that the farmers or gardens need.  This week has seen us in the second week of the school holidays with a quiet week recovering after a busy September.  Regular readers will have noticed my blog was vegan last month for Vegan MoFo but this month it will be back to vegetarian (with plenty of vegan food). 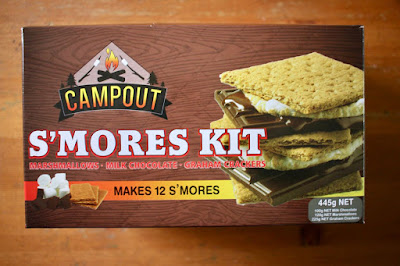 Sylvia and I were excited to see a S'mores kit in the supermarket.  We've tried a few versions of s'mores this year but never with shop bought graham crackers.  This is the first time I have seen them for sale in Australia.  We tried them a couple of nights and then all the chocolate and marshmallows went into an early morning edible slime making session by Sylvia and friend at a sleepover and I don't know what happened to the crackers. 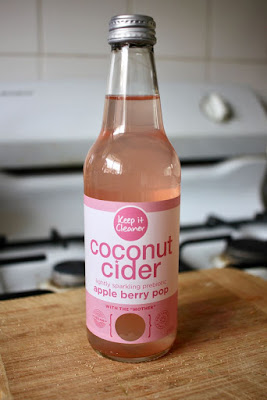 I bought coconut cider at the supermarket because I was curious.  It was barely sweet and refreshing but tasted like barely sweetened water with vinegar.  I liked it but am not sure it will replace my love of kombucha. 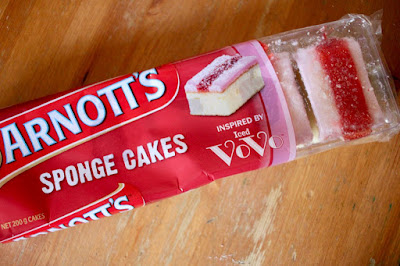 Another curiosity purchase was this packed of Arnotts sponge cakes inspired by Iced VoVo biscuits.  This cake took a lot of liberties with Australia's beloved biscuit.  Not enough coconut on the pink strips.  A nice enough cake if you like that sort of thing. 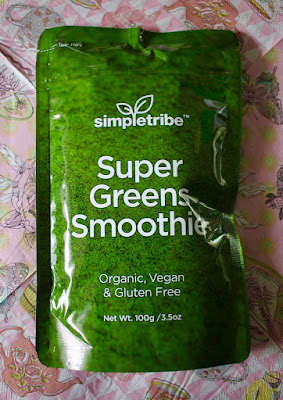 I also tried bought this from the supermarket.  So far I have only tried it in sushi rice to see if it is green enough.  The colour was disappointing.  I am still dreaming of using it to colour food like bread but I suspect it is more about health benefits than great colour. 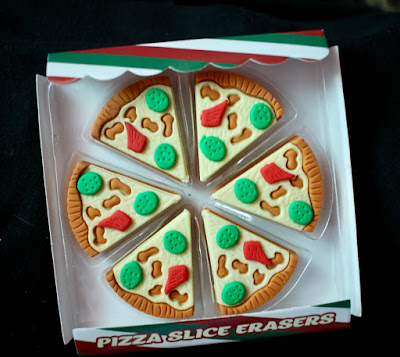 This is a really cute pizza eraser that Sylvia got from the city.  (Perhaps Daiso where she is so keen on the mouldable erasers.) 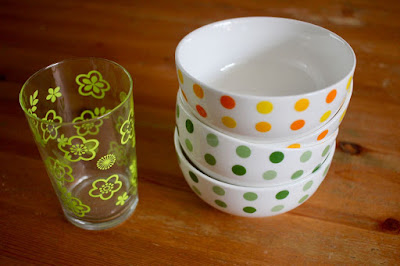 I went to t Daiso to buy Sylvia another mouldable eraser and was quite taken with some of the cheap kitchenware.  These bowls and this glass are quite thin so I wonder how long they will last but they bring joy! 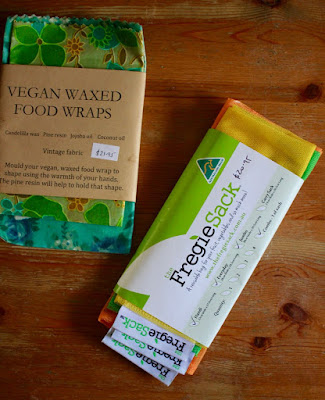 I have good intentions with regard to leading a sustainable life.  But some days it feels two steps forward and one step backwards.  I am using less larger plastic bags for shopping (however we are buying more plastic bags to line bins) but am still using smaller plastic bags.  I bought these vegan waxed food wraps to wrap sandwiches in instead of plastic bags but am finding that the bread crumbs stick to them and I have tried wiping and washing them off but not having much luck.  I bought the Freggie Sacks as another alternative to smaller plastic bags and am using them a little to store veggies  in the fridge but have not managed to get into habits of taking them shopping. I keep making overnight sourdough bread.  Usually I slash a few short slashs across the loaf.  It is a sign of my increasing confident in slashing that I finally tried a long slash the length of the loaf.  I still need to work on increasing the tension of the loaves, which makes slashing much more impressive. 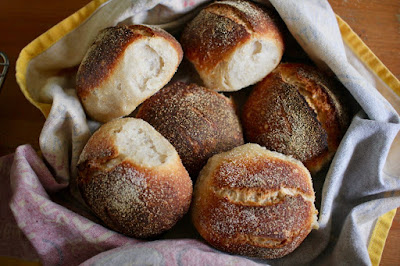 I always made enough dough to make two loaves of overnight sourdough bread.  If we have enough bread about, I make bread rolls.  I have quite a lot of photos of the rolls and intend to write about making them.  However I find that in blogging when you have a lot of photos, there is this belief that the perfect photo will come along which is a real block to ever posting.  One day ... I hope! 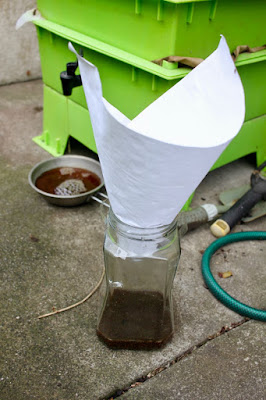 My worm farm is another ongoing project that I feel I might write about in more detail one day.  Recently there have been many vinegar flies trying to colonise the "farm" and my backyard.  I read about what to do.  I put some red wine vinegar and a squirt of dishwashing detergent in a jar and sticky taped a paper cone to the mouth to lure in the flies.  It looked like one of those chia puddings with all the drowned flies.  My worm farm is doing better but I am still a bit wary about feeding the worms all my fruit and veg scraps (except of course for onion, garlic and citrus). 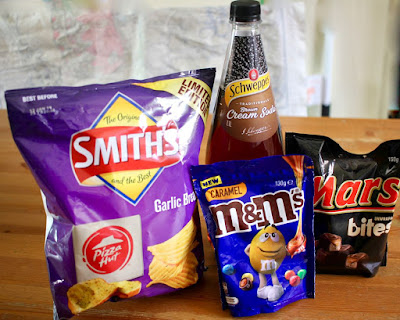 Last weekend was the AFL football grand final (or the granny as my brother calls it).  I come from a family of Collingwood tragics (or supporters as they like to refer to themselves) whom I try and avoid during a grand final because they are unbearable if they win and it is terrible if they lose.  Collingwood lead during all but 5 minutes of the game.  Unfortunately most of those 5 minutes were at the end of the game so West Coast sneaked in a victory.  We watched at home with our neighbour and were stunned but well fortified by junk food. 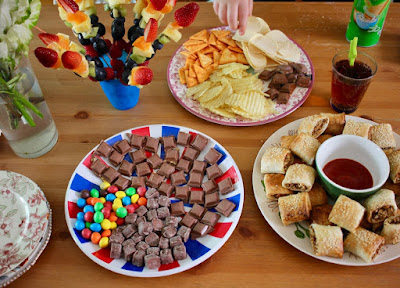 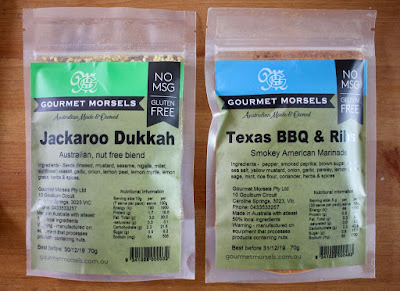 This week we have kept fairly quiet but we went to the Melbourne Show at the start of the week.  I intend to share more photos but here are a couple of purchases.  I really loved the range of Dukkah's from Gourmet Morsels.  It was hard to choose just one but I know I don't eat them quickly enough.  I also bought the Texas BBQ seasoning because I do use this sort of seasoning and just ran out of my current mix. 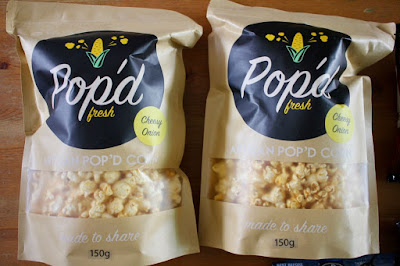 We also really loved the Pop'd Fresh popcorn and bought three bags full.  One was the Simply Salt and the other two were the Cheesy Onion.  (The Chilli Spice was too spicy and the Sweet and Salty was sold out).  I was surprised to hear that the Cheesy Onion was vegan after I had tasted it. 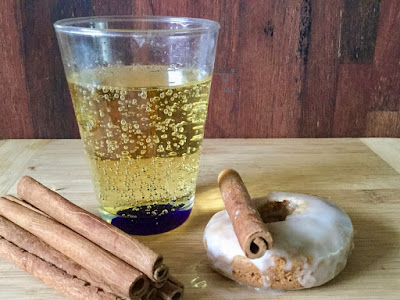 Lastly we made vegan apple cider doughnuts yesterday.  They were nice but not quite as light as I expected.  I don't think we got the ingredient measurements quite right but Sylvia took a very nice photo of her doughnut she glazed (above).  We only baked 6 even though we might have made a couple more if we had another doughnut pan and we just glazed them rather than also sprinkle with sugar and spice.  Maybe I will get to try them again to see if I have more luck the second time.

I am sending this post to Sherry of Sherry's Pickings for the In My Kitchen event, that was started by Celia of Fig Jam and Lime Cordial,  If you would like to join in, send your post to Sherry by 13th of the month.  Or just head over to her blog to peek into more kitchens.
Posted by Johanna GGG at 23:14