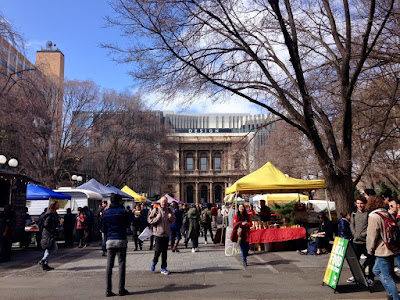 It's seems everyone is doing it these days!  A few years back the University of Melbourne started a Farmers Market on the Union Lawn (that I have always known as the Concrete Lawns but may years before my time used to be a recreational lake).  It is only open during semester and is very popular and busy with students queuing for lunch.  There are lots of vegan options and I will share a few today. 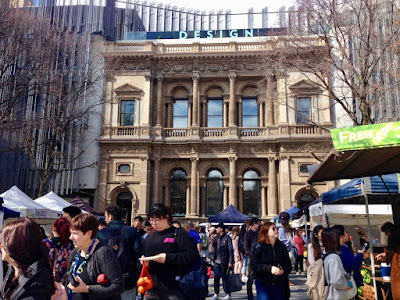 The University of Melbourne can be quite tricky to navigate as it is a rabbit warren of buildings.  The Farmers Market is held between the Union Building and the fairly recently built Melbourne School of Design.  The history of the facade on the MSD is quite interesting.

It was originally part of the Bank of New South Wales (that became the Westpac Bank) in 1856 by Joseph Reed and based on St Mark's Library in Venice.  When the building was demolished in 1932, the facade was donated to the University and removed by the infamous Whelan the Wrecker.  I came by a few years back to see the Commerce Building behind it was demolished.  The bank facade was propped up waiting for the MSD to be built behind it.  To see what it used to look like, check out the photos in this university lunches post.  And speaking of lunches, let's talk about them. 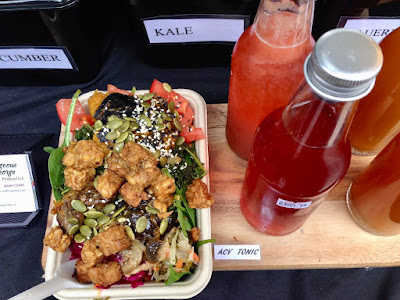 I have been a fan of Gorgeous George's kombucha for a while so I couldn't wait to try his vegan poke bowl with tempeh.  Actually it does not have to come with tempeh but it is quite unusual to find tempeh in such dishes when out and about that I was quite excited.  If anything, there is too much choice here but this was a lovely healthy lunch.  From memory I had rice, chickpeas, kimchi, seeds, tomato, kale, tempeh, roast pumpkin and satay dressing.  And if you are anywhere near his stall, I highly recommend a bottle of kombucha.  We love the cherry pom. 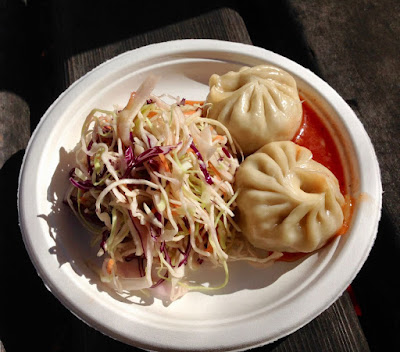 I was also rather taken with the Himalayan Tibetan Tent's momos.  These dumplings have a lovely thick dough with a cabbage and - I think - tofu filling.  I had the 2 momos with salad and dipping sauce ($5).  The coleslaw had a vinaigrette dressing.  The dipping sauce I chose was the less spicy and still quite spicy for me.  Since then I have had the momos with soy sauce at the local farmers market.  They are such great comfort food I have found it hard to try different lunches. 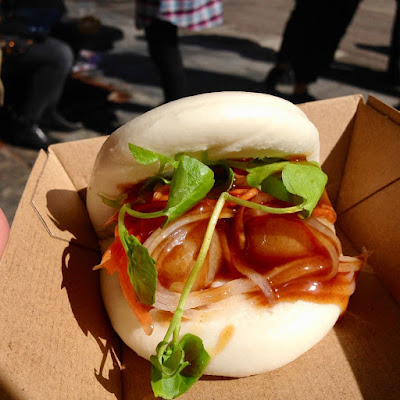 I tried the Bao for something different.  It was possibly my first go at cooked daikon.  It is not high of my list of vegetables but was quite nice.  I really liked the fluffy airy bun but found the sauce quite messy.  When I asked for a vegan bao I was told they would do it without the mayonnaise.  This was another cheap meal but not terribly filling. 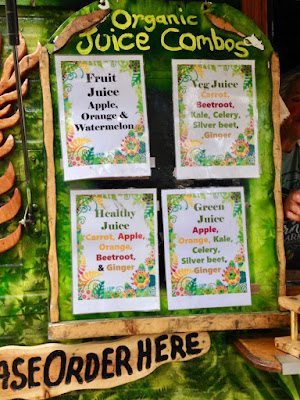 I quite like the juice place.  Sadly its rosti are not vegan (they include egg) but the mega samosa can be served with just the tomato sauce and not the yoghurt sauce. 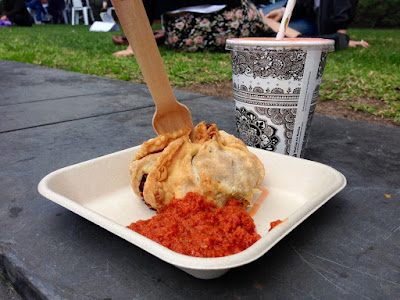 I really enjoyed the crispy mega samosa though I was a bit less keen on the tomato sauce.  Though they are much bigger than a regular samosa, they are not a huge meal.  I had it with a Healthy Juice - carrot, apple, orange, beetroot and ginger.  It completed the meal nicely. 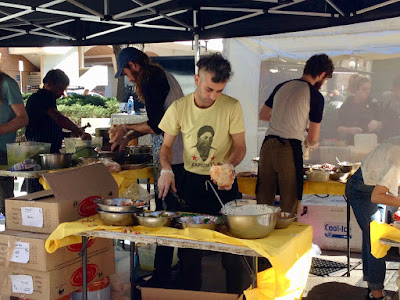 One of the ever popular places to eat is Shuki and Louisa (who run Very Good Falafel in Sydney Road).  Their falafel is amazing.  Crunchy on the outside and green with enough texture inside not to collapse into mush.  I managed to find a break from the queues and order one of their delicious falafels in pita bread which are all vegan. 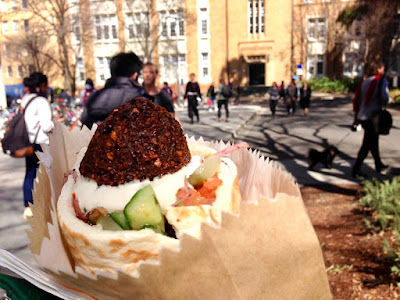 The pita bread is soft and pillowy, there are lots of vegies and hummus.  And it only costs $9.  I can see why their falafel is so popular. 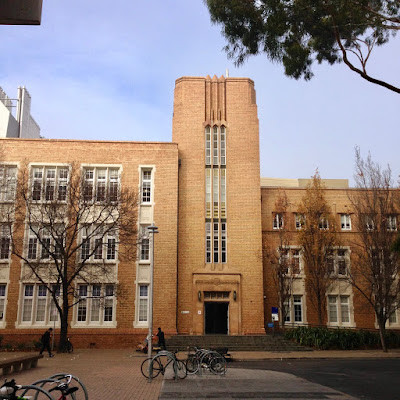 You might have to wait a bit for your falafel.  If you do, you can watch the rhythm and drama of the falafels being made, you can watch all the people at the market or you can just admire the surrounding buildings such as the elegant 1930s chemistry building, recently seen in the Jack Irish tv series. You can also enjoy some music from the buskers at the market. 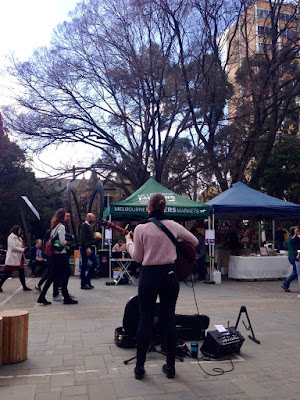 I didn't get as much time as I would like to try everything.  I can sing the praises of 5 and Dime Bagels.  I recently had one of their bagels elsewhere with vegan cream cheese that was delicious.  I meant to check if the thai curry was vegan or if you could adapt the korean plate.  And if you don't have time to queue for Shuki and Louisa, there are a few others places selling falafel. 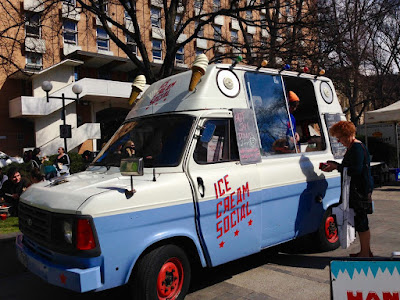 Once you have your fill of savoury food, on a sunny day it is fun to sit in the sun and enjoy an ice cream from Ice Cream Social's very retro van.  This is the surest way to have your manager walk past! 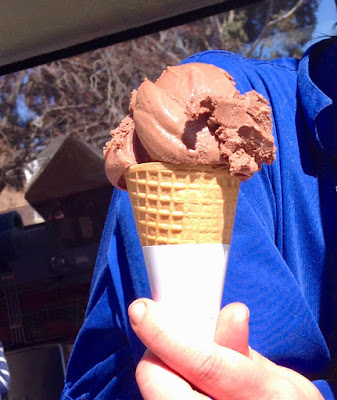 While they are not a vegan company, they seem to have a vegan ice cream flavour most weeks.  I tried a chocolate ice cream the other day.  It was more on the sorbet end of the ice cream spectrum but a nice end to my lunch. 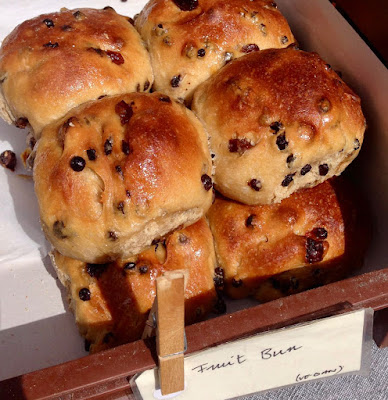 If you are on the run and need to take away I can highly recommend the fruit buns for Sourdough Kitchen.  They are so fresh and soft that it is hard to keep one in a paper bag long.  I also recommend Cocoa Rhapsody who have some amazingly delicious vegan chocolate. 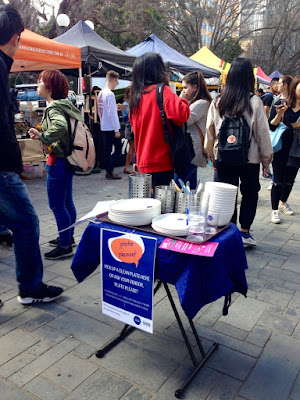 And you might have noticed I am not quite managed to get the reuseable plates that have been introduced at the market recently.  Some days I am not quick enough to ask a stallholder for a plate but I will try in future.  It is great to see the market trying to be more sustainable.  Just another reason to visit the market.

The University of Melbourne Farmers Market  also had a few stalls selling fruit and vegetables but it more geared towards lunches than groceries compared to other farmers markets that I visit.