Raising a vegetarian child to be tolerant of meat eaters 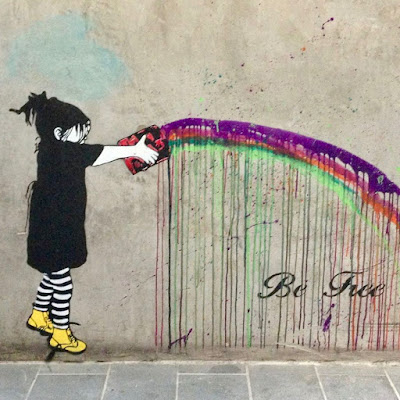 A few months back we had a very stressful night at a pizza shop where I was served meat pizza by mistake.  What really startled me the most was how my 8 year old vegetarian child reacted and how much she has to learn about tolerance, respect and kindness for non-vegetarians.

What happened when I accidentally ate meat

We went to a pizza restaurant for dinner last year and I was busy trying to avoid stuff on the pizza that my daughter would not eat and hence not paying attention to the fact that my husband's meat pizza was really similar to my own but with meat.  I ended up taking two bits of his pizza and then stopping to work out what on earth was on it.  Ugh meat!

I thought that was the worst of it.  Turns out it was worse to have a daughter who was furious at me for eating meat.  In that contrary way that is so typical of kids, she took comfort from my husband who is not vegetarian.  She was so angry and unforgiving of me.  "But dad ..."  I spluttered in bemusement.  Apparently I was meant to be vegetarian always even if he wouldn't.  The next morning when she was still upset I sat her down for a talk.

What vegetarianism can teach children about life

I told my daughter some home truths off the top of my head.  After some consideration, I have added some more to share here:
Life is uncertain and unpredictable in a way that is hard to spot as an 8 year old who has always eaten vegetarian and feels pure.  Life is messy and does not follow a linear path.

The experience of the accidental meat pizza made me understand that being vegetarian could teach my daughter lessons about chance and change, about being tolerant of difference, about being prepared for the unexpected.  An individual does not have to be made in your image for you to accept them and to treat them kindly.  And people will not always be the same.  (Thanks goodness!)  Someone you respect might act in a way that appalls you.  Someone you dislike might do something that makes your heart sing.

Vegetarian children can be seen as different.  It can be tough.  Their mothers are always asking other mothers not to feed them meat.  The vegetarian child is the one is asking what is in their food.  However, they are not the only ones to stand out.  Others might be different for a whole host of other other reasons.  I hope being vegetarian and learning what it is like to be the odd one out can also help my child be tolerant of others whether it be because of what they eat or the colour of their skin.

Being a kind vegetarian

There is a lot of talk about vegetarian (and vegan) kids being kind to animals and being role models to meat eaters.  I agree but this is only the tip of the iceberg because it's complicated.

Being a role model as a vegetarian is not just about being kind to animals but also being kind to humans.  When I went vegetarian, I had many discussions about not wanting to make others feel uncomfortable because I was vegetarian.  Mostly this means not making too much fuss when people mistakenly slip some meat stock into my meal but once on my travels it meant eating a bowl of beef stew made by a woman who did not speak English and had been incredibly kind to me.  A kind vegetarian is far more likely to make others want to follow their footsteps than a judgemental one.  And a kind vegetarian will probably be fed better!

It is all too easy for vegetarians to judge carnivores as not being kind because they eat meat.  Yet I see a lot of kindness by the meat eaters about me who are brilliant at recycling, volunteering their time to help others or standing up for the vulnerable and disempowered.  They are not bad people and they do some things far better than I do.  Being vegetarian is only part of the big picture.

My daughter does not hang out with many vegetarians.  Most of her extended family and friends are meat eaters.  Some years ago, I had to caution her against trying to convert her friends.  The idea of her trying to convert them to be vegetarian is as disturbing as the idea of them trying to feed her meat or teasing her for being vegetarian.  It does not mean she does not need to be able to tell people why she is vegetarian but I want her to try to be kind when she does.

Explaining why others eat meat

There have been times when my daughter has been very concerned about people she cares for eating meat.  After all if it is not right for her, why should it be right for others!

So how do I explain to her about others eating meat?  We have talked about different people making different choices but also people being brought up to understand eating meat in different ways.  We can make choices for ourselves but not for others.  My daughter finds it odd that I ate meat as a child but for me that was my normal.  Being vegetarian is her normal.

I couldn't find much on the web about this topic.  There is plenty else online about other issues (compassion and nutrients) related to bringing up vegetarian or vegan kids.  So I hope this post will be useful.  If you want more reading:

For more general reflections about being vegetarian you can read my "On being a vegetarian" post.

I liked this Mothering discussion about explaining vegetarianism to kids in a non-judgemental manner.

I am interested in No Meat Athlete's attitude towards navigating vegan life in a non-vegan world.

And I like the sound of this book about Herb the Vegetarian Dragon by Julie Bass that ends with meat eaters and vegetarians living together.  (I haven't read it but would like to.)