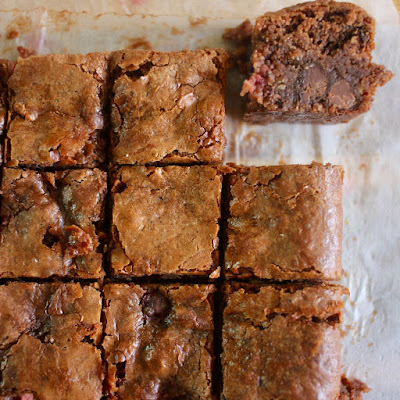 Apologies for the long post title.  Celebrations are time to experiment with food that is a little extra indulgent.  So a couple of recent birthdays have seen me trying some new recipes.  While they are not been the height of perfection they have certainly given us some interesting and decadent food. 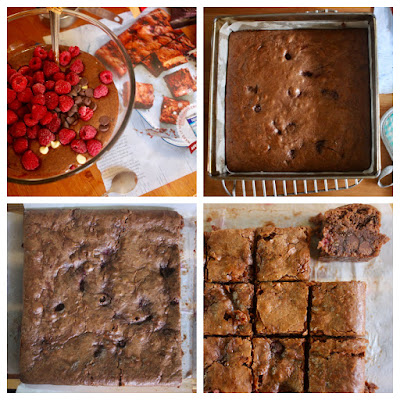 First up is a fudgy chocolate raspberry brownie that I saw in a supermarket magazine.  It intrigued me because it did not use eggs and was full of condensed milk.  It seemed a good idea because I had some chocolate buttons I wanted to use up before hot weather turned them to goo.  I also used gluten free flour because I had some on hand and wanted to take it to a family gathering. 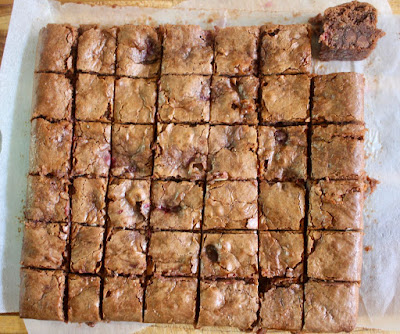 I made this brownie on a night when my oven was failing dismally.  When I first pulled it out of the oven it looked so undercooked I returned it to the oven.  However as later in the evening my oven would not light at all, I am unsure if the oven was on during all the baking time or not.  The brownie was very soft and squidgy.  It did have the right crackle top which I had thought was difficult to achieve without eggs. 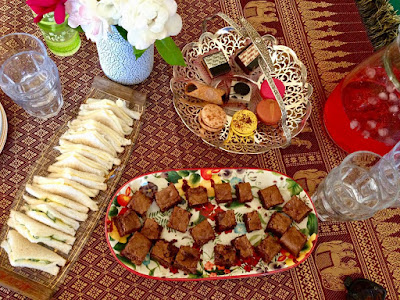 I took the brownie to my mum's birthday afternoon tea.  As I often do with rich desserts, I cut it into small pieces.  It was plenty.  We all enjoyed it but found it very rich.  Afterwards we divided it up and only brought home a small tub of brownie.  After all the rich food at the afternoon tea I wasn't so hungry for this sort of thing for a while.  It was about a week later we finally finished it and it lasted the week rather well. 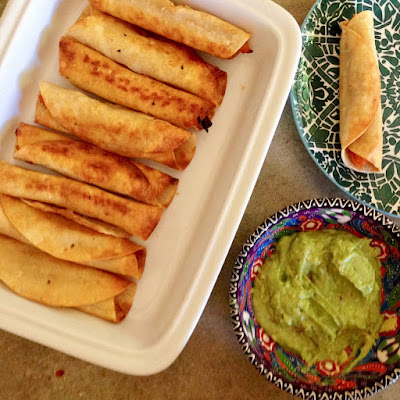 Later I had my own birthday to celebrate and looked at some Pinterest ideas.  I asked for a Mexican feast because it was a hot day and this is a great way to make sure we accommodate all the family dietary requirements.  Apart from the usual nachoes, taccos and sides, my mum and I made Sweet Potato Lime Taquitos with avocado dipping sauce.

It was the first time I had made taquitos.  And a busy day.  So when I took over from my mum in rolling up the sweet potato, it cracked horribly.  My mum had read the recipe more closely than me and told me I had to microwave 2 corn tortilla for 45 seconds so it rolled without ripping.  Far more time than I expected.  The resulting taquitos were really good but had to be fried before the lunch and heated up. 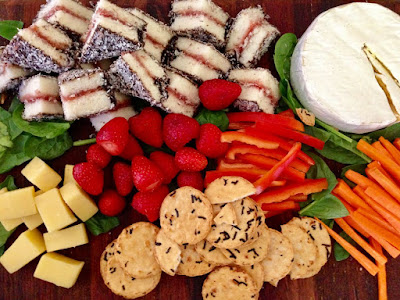 For dessert I had asked my sister in law to bring grubs and my sister to bring a fruit platter.  Fran focused on the platter rather than the fruit and made a platter with a bit of everything - cheese, rice crackers, vegies, strawberries and lamingtons.  It was rather spectacular.  Grubs are not spectacular - even when made to be a bit of round and a bit of square - but they never fail to delight me. 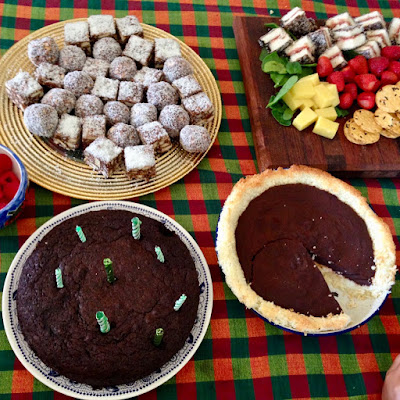 My mum and I also made Martha Stewart's Crisp coconut and chocolate pie.  It was rather rich and looked almost as good as Martha Stewart's.  However the coconut crust was too thick compared to the filling and once we cut a piece it was rather crumbly over the filling.  I think if I make it again I would like to make it a slice to cut smaller pieces and perhaps to put some condensed milk (and use unsweetened not sweetened coconut) into the base to stop it being so crumbly.  I also think I would like something to soften the topping a little and maybe sweeten it a bit as it was quite bitter.  Mostly I would love the time and opportunities to experiment with the recipe! 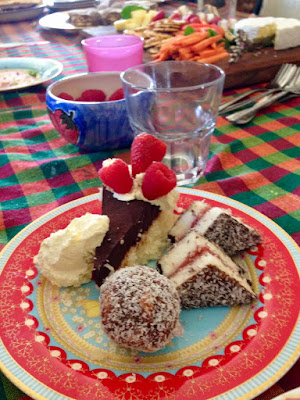 Here is Sylvia's plate of dessert.  She had a lovely time piling her slice of tart with cream and raspberries.  She also enjoyed our early trip to the beach in the morning and our trip to the pool with her cousins in the afternoon.  We both love our swimming and in hot weather the pool or beach is really the only place to be.

Mix condensed milk, butter and vanilla in a medium saucepan over low heat (you don't want the mixture too warm) for about 5 minutes or until butter melts.

Stir in flour, coconut, brown sugar, cocoa and baking powder in the saucepan.  (I heated my butter over medium heat and so my mixture was too warm and I had to transfer to a bowl to cool it enough that it did not melt the choc chips.  Fold in raspberries and choc chips.

Pour into prepared cake tin and bake for 25 minutes.  Turn off oven and leave for 5 minutes before removing.  It should be soft but slightly browned and showing a few cracks.  Cool in tin and then cut into squares.

On the Stereo:
Foreign Affairs: Tom Waits
Posted by Johanna GGG at 22:14