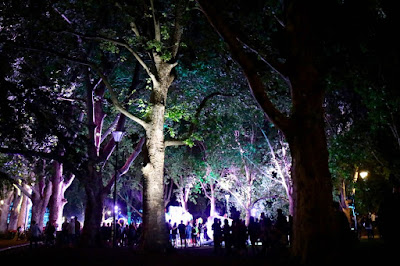 If you were an alien arriving last night in Melbourne to see how it functions, you would get a very different image of the city to its usual self.  White Night is an annual night when Melbourne is lit up to reveal wit, wonder and secrets that are hidden in the usual humdrum of everyday.  Streets are closed to traffic and filled with the curious, images are projected onto buildings, and everyone seems very convivial.

After missing last year, I summoned the energy to go along and was thrilled by the creative images on offer, despite the crowds and queues.  I managed to get along to the Exhibition Buildings and the State Library.  Here are some of my snaps of the video projections. 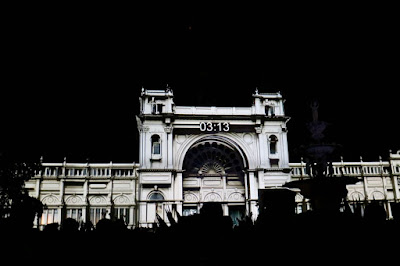 My first port of call was the Exhibition Gardens - an easy walk from the State Library.  I got there half through a cycle, watched another full one while taking photos and watched another while taking no photos.  So I sat through two pauses between cycles.  The countdown was helpful and the way the sections of the buildings moved about gave an indication the messing with our minds that was to come.

The actual cycle through the video was fast, moving along to pulsing insistent dance music with lots of colour and movement.   There is a dome behind the two towers but I guess logistically it was hard to include it. 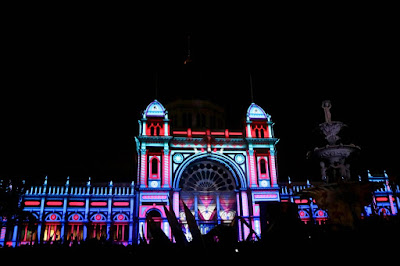 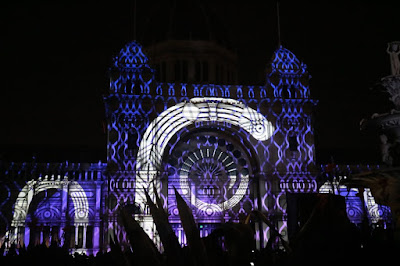 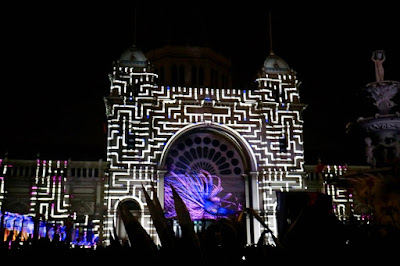 A dragon coming through the artch.  Because it was also Chinese New Year last night? 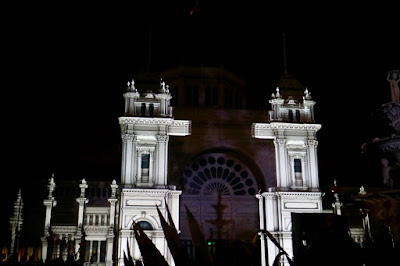 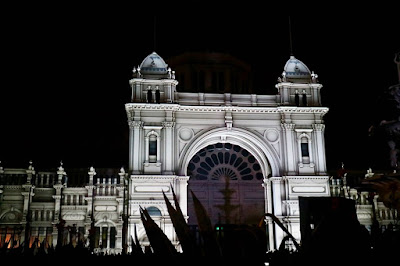 To form an artist's representation of the actual building the images are projected on. 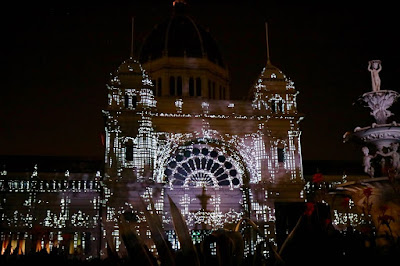 Then the building crumbles to pieces. 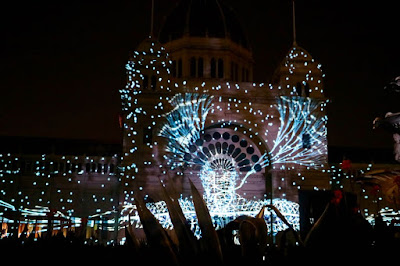 Then the building rebuilds as a person (hard to see but there is a head with arms stretched out the length of the building (that really needs a panorama shot to represent properly). 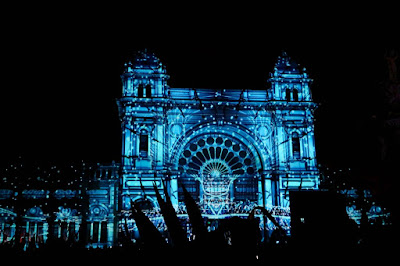 Then the whole building seemed to be made of ice and cracking up. 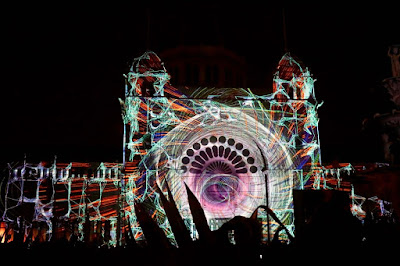 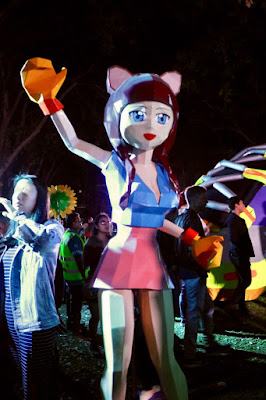 I would have liked the energy to walk around to the Melbourne Museum for more light shows but instead I walked down the avenue of trees to Victoria Street where there were lots of blow up koalas, spiders, spacemen etc and then cute anime girl.  I found it hard to walk around with so many people everywhere.  My moment when I most wished away all the crowds. 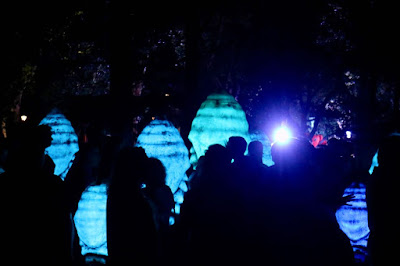 I happened across these mounds of light and sound as I walked away from the Exhibition Buildings.  I don't know what they were and heard someone saying maybe it was nothing wrapped up to look like something.  It was busy walking back to the State Library but the roads were closed and there was room for the crowds.  I joined a queue to get into the dome which took about 20 minutes. 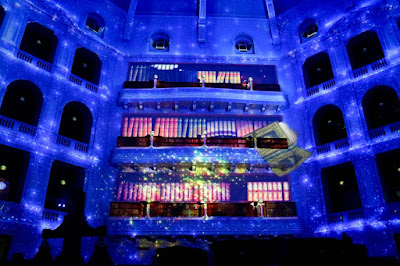 I had visited the State Library on White Night a few years back.  It was absolutely spellbinding.  This year's was not quite as wondrous but that is not to detract from the sense of wonder I had upon walking in.  Books flew from the shelves and opened to immerse the library in their subject matter: 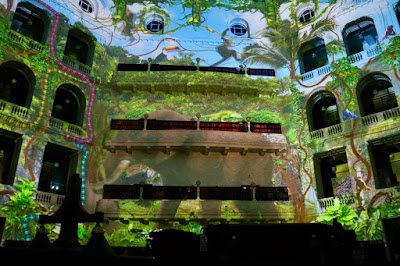 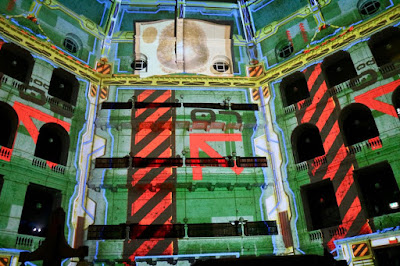 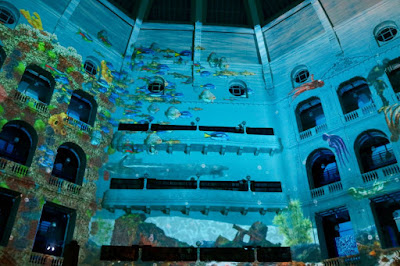 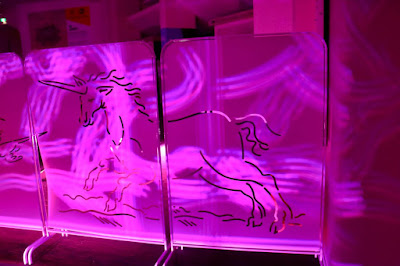 After the long queue it was easy to find space to sit inside the library and watch the video projections.  Coming out into the gallery behind the dome I was surprised how many people were there.  (It is much quieter at other times of year and I prefer those times but maybe the bean bags were just too tempting for others.)  Come out, the computer terminals had interesting screens like the above set up to hide them (and stop people looking up that elusive book at 4am?). 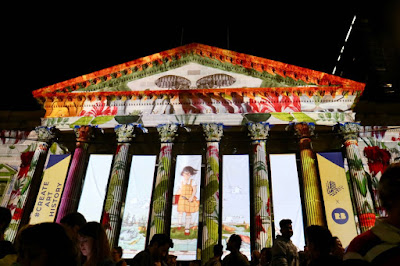 Outside I liked the video display on the exterior of the State Library better than I did two years ago.  The music was dreamy and I loved all the flora and fauna. 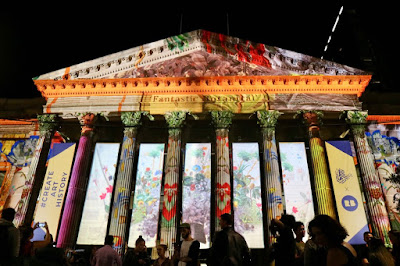 I had enjoyed looking at this installation at the last part of the queuing for the Dome. 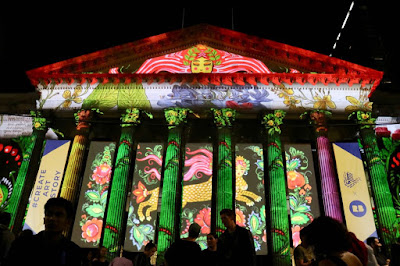 And had it not been late I might have stayed to just enjoy the music and images for a while more. 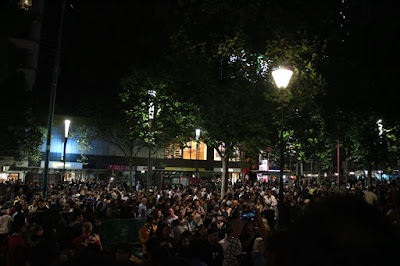 Instead I looked with awe at all the crowd across Swanston Street and then realised with horror that I needed to get across this crowd to get to the train station.  It was not as bad to get through as it looked at first glance.  I only had to wait a few minutes for a train and got home just after midnight.

Read about my previous visits to White Night: