How to make a Loch Ness Monster cake 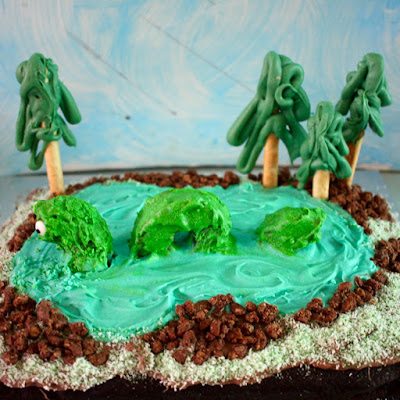 When it came to making a birthday cake for Alex and Ian this year, the issues to take in to consideration were a serious lack of energy (mine) and a serious desire for doughnuts (Sylvia's).  A Loch Ness Monster cake seemed to please everyone.  Easy enough for me, doughnuts for the monster for Sylvia and Scottish enough for E.  I didn't have any grand plans and did some learning as we went but it was a fun cake that impressed our guests. 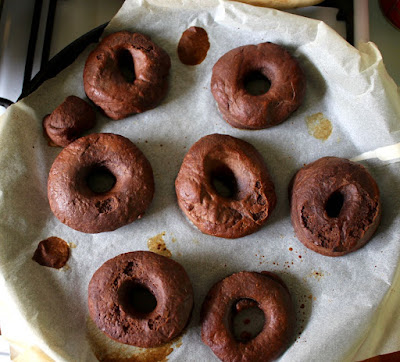 The doughnut theme actually helped make the cake seem possible because we were one step ahead with doughnuts in the freezer ready to be baked.  Right from the beginning I knew the sturdier yeasted variety would work far better as decorations than the more delicate baking powder doughnuts.  They weren't quite as smooth as the first batch of doughnuts but it was close enough for jazz.  As I usually try to do, we started the day before. 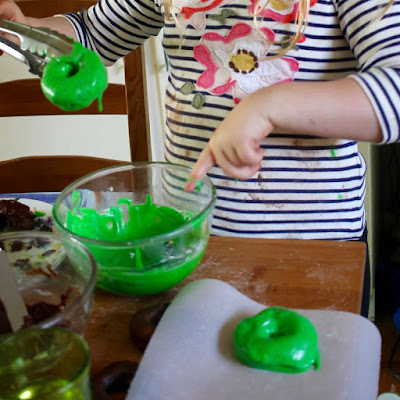 We looked online at some Nessie cakes and decided to just make a green icing and dunk the doughnuts in it.  I didn't really think this through.  Ideally I should have used an icing sugar and water or milk icing that would have set more firmly and maybe more smoothly.  Using up the rest of the tub of cream cheese and some margarine in the icing made it quite soft and reluctant to set firmly.  Check out the mess they made on the baking paper below! 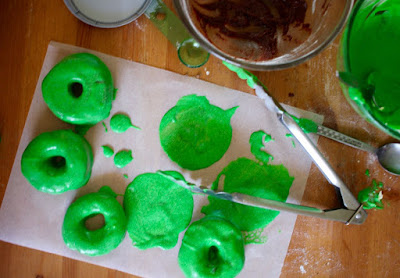 Perhaps if I had thought it through more I might have cut the doughnuts before we dipped them in icing.  (Though the off cuts would not have tasted so good!)  At least I had the foresight to keep some icing aside so I could patch where we cut or where fingers made marks.  The next day I cut  the doughnuts into parts of the monster.  I initially thought we would do two humps but there wasn't room.  I cut a small piece for the tail and a larger piece for the head which I whittled slightly to make it rounder. 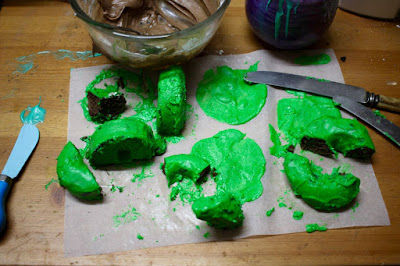 I had made the chocolate cake base earlier in the day.  Chocolate is always my preference.  I chose a vegan chocolate cake that I know well.  It is a simple recipe and tastes really good too.  And it holds up well when decorating.

We managed to put on the lake (teal icing), dirt (chocolate icing), grass (green coloured coconut), rocks (milo cereal) and the Loch Ness Monster doughnuts by the end of the night.  Having the muesli around the lake helped give it definition. I also considered Oreo biscuit crumbs instead of the muesli 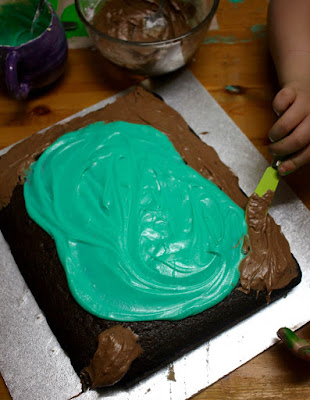 By the end of the evening I was able to report to Sylvia in bed that Lochie has done a faceplant.  Yes, the head had keeled over, eyes and all.  It took a bit of patching with my spare bits of icing to try and rectify it.  Luckily Sylvia is a smart cookie and suggested I put a skewer through the head to keep it up. 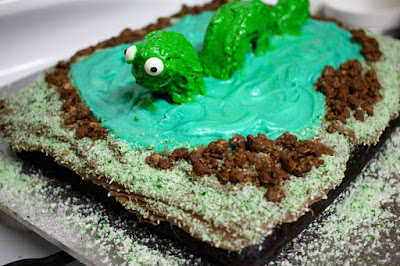 It was just as well we had got so much done the night before because we had lots to fo the next morning.  Just making the trees to put around the shore was enough to get done.  Actually it was the moment when I told everyone to leave me alone to just get it done.  But the trees turned out fine.  I had got the idea from a cake that used pretzel sticks but there were none to be found in the supermarket so we got breadsticks instead.  Given how thickly we piped the green tinted white chocolate out of a ziplock bag, the breadsticks worked really well. 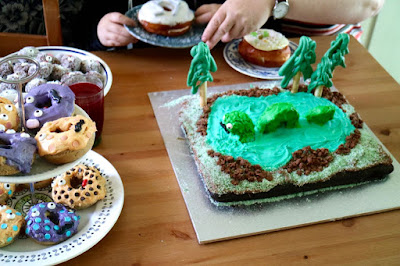 Everyone was suitably impressed by the cake.  I am impressed that we managed to serve 3 doughnuts - the chocolate doughnuts on the Loch Ness Monster cake, the home made monster doughnuts and the fancy shop bought Uncle Doughnuts.

If you look closely at this last photo you will see a bone of contention between Sylvia and me.  She insisted that Lochie had a moustache.  I resisted as long as I could.

It is unlikely that I will ever make another loch ness monster cake but if I do, I will have learnt quite a lot from this experience.

I am sending this cake to We Should Cocoa and Baking Crumbs.

How to Make a Loch Ness Monster Cake
You can take shortcuts by buying the cake, the doughnuts and frosting or make it all from scratch.  I didn't take measurements of my icing/frosting or other elements.  This really depends on the size of your cake.  There are three different green icing batches to be made in different tints of green  Add a little blue or yellow to green colouring for different tints.  Keep some icing aside after spreading it on cake in case you need it for patching up bits of the cake.

1 rectangular chocolate cake (see below recipe or use your own)
2 or 3 firm doughnuts (like these)
Green icing for doughnuts (made with icing sugar, water and colouring)
Green frosting for lake
Chocolate icing for around lake
Coconut and green food colouring
Milo muesli, coco pops, crushed chocolate biscuits (cookies) for rocks
2 candy eyes
1 skewer
Bread sticks or pretzel sticks for tree trunks
White chocolate and colouring for tree branches

Preheat oven to 180 C.  Grease and line 9 x 13inch rectangular cake tins.  Mix dry ingredients and then add wet ingredients.   Bake for 30 to 35 minutes or until a skewer inserted in the middle comes out clean.  Sit in tin 5-10 minutes.  Turn out and cool on a wire rack.

On the stereo:
Titanic: Music As Heard On The Fateful Voyage: Ian Whitcomb, White Star Orchestra
Posted by Johanna GGG at 16:53