Wallace and Gromit and friends: the magic of Aardman, Melbourne 2017 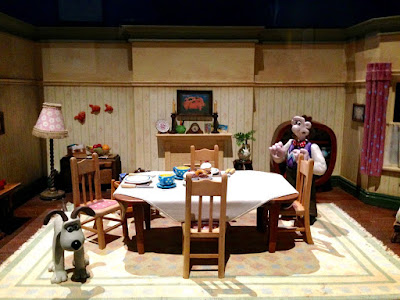 A few weeks back we saw the Wallace and Gromit exhibition at ACMI.  I love the Aardman animations so it was great fun to see all the tiny sets and characters and marvel at the details.  I didn't take my DSLR camera because I wasn't sure they would allow photos but there was a sign saying photos were welcome.  So here are a few I took on my phone.  I've tried to keep a few humans in some photos from some perspective. 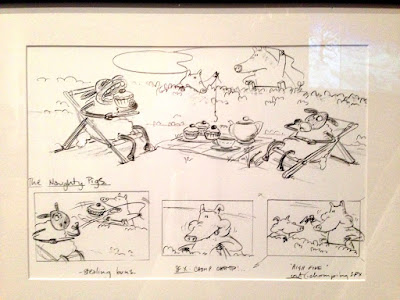 The exhibition started with a cartoon of the original short film about Aardman, the super hero that inspired the name of the animation studio.  Then there was lots of sketches.  Above are some sketches from Shaun the Sheep with the naughty pigs who are such fun characters. 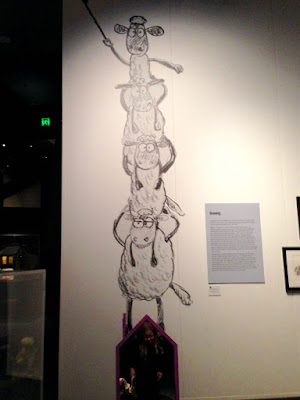 Then we noticed the little house shaped hole in the wall.  Clever stuff!  (Apologies for the terrible photo of the sheep stack!)  I imagined the brainstorming conversations when someone came up with the idea of little holes in the walls - just big enough for kids to crawl through - for parents who thought their kids would like the exhibition but found the little cherubs were a bit bored.  These kiddie holes were a hit with Sylvia for whom the actual exhibition was a bit hit and miss. 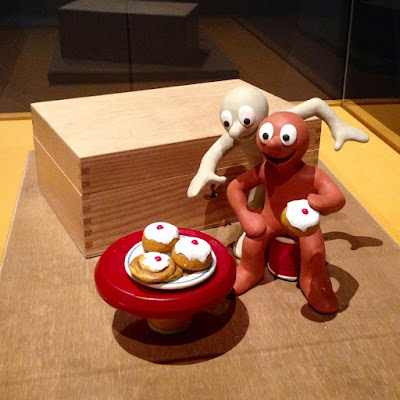 I was delighted to see Morph animations.  I remember watching Morph on tv with Tony Hart when I was a kid.  Isn't it odd when you are reminded of shows you haven't thought of for decades!  I was glad to find he was every bit as amusing as I remembered. 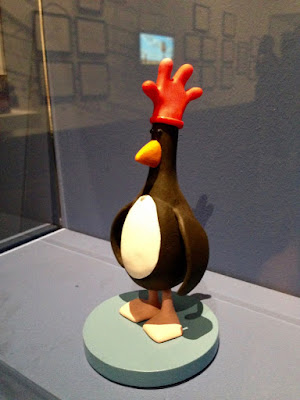 This guy has to be one of the greatest comedy villains of all time.  The idea of a penguin wearing a rubber glove on his head to impersonate a chicken is brilliant.  And Feathers McGraw almost got away with it!  There were a few video screens with excerpt from movies and I was shocked to find Sylvia did not recognise the scene with Feathers McGraw on the toy train.  This has since been remedied but we still need to find her a copy of Chicken Run to watch. 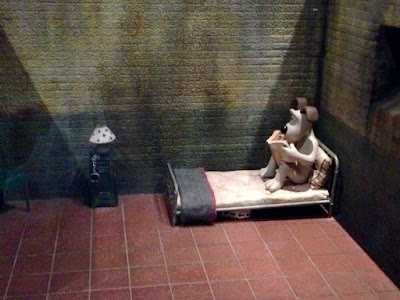 While A Close Shave is not my favourite Wallace and Gromit movie, I love this gaol scene.
q 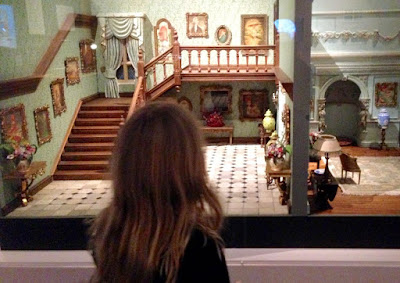 The amount of research and detail in Lady Tottington's house in Curse of the Were Rabbit is just amazing.  So tiny and so perfect. 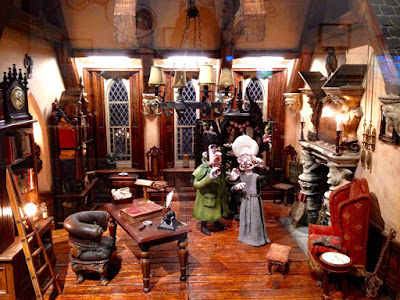 I really love the Wallace and Gromit interiors.  This one also from Curse of the Were Rabbit with the baddie and the vicar.  The attention to detail is superb. 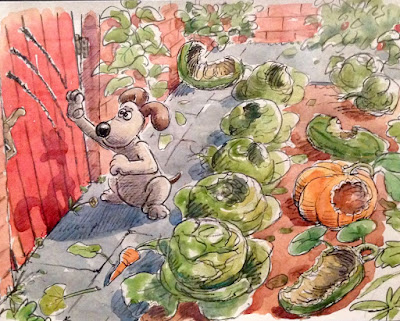 It is hard enough to think of conceiving these sketches that imagine such complete worlds ... 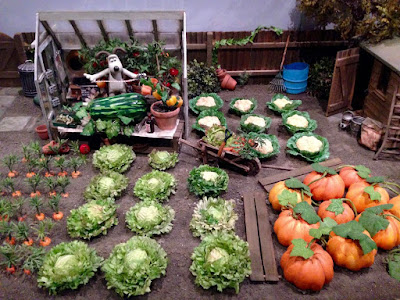 And then to build them into tiny reality with plasticine and other bits of pieces.  The vegetable gardens in Cure of the Were Rabbit are also a delight. 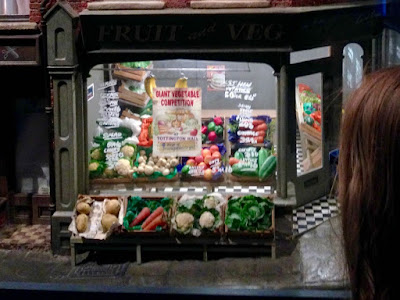 And then to put all these vegetables into a shop so tiny that the vegetables mustn't be much bigger than the tip of my finger. 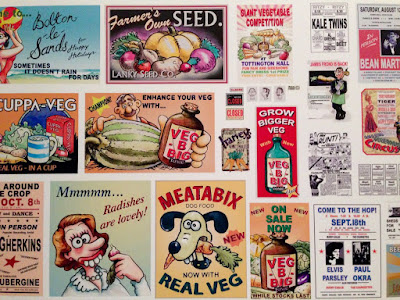 Also from the same film is a display of advertisements and posters that have lots of fun in them - Elvis Parsley and Bean Martin are tiny details that not many will even notice but there are there anyway - for the trainspotters! 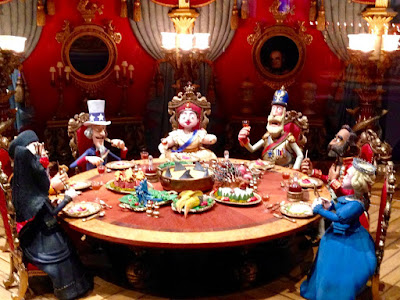 There were some wonderfully sets from The Pirates!  Band of Misfits.  We have not seen this movie and the sets made us keen to see it.  (Isn't that what a good exhibition does!)  The above picture is from the Rare Creatures Dining Club in this movie. 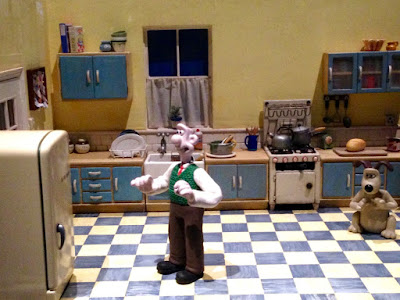 The kitchen is wonderful but I don't remember it being so spacious in any of the movies.  Perhaps it needs space for photographing it? 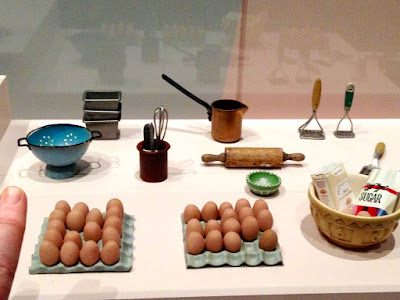 I really really loved these miniature kitchen items.  I took a picture with my finger to try and give some idea of just how tiny but perfectly formed they are.  So many eggs. 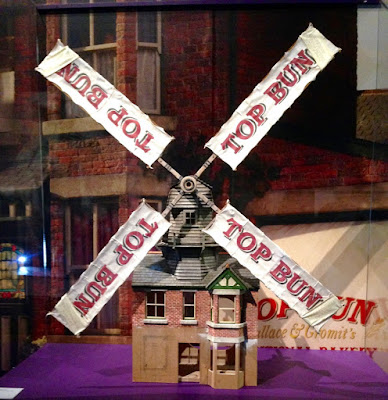 And this is the bakery from A Matter of Loaf and Death.  That windmill looks so huge compared to the little house. 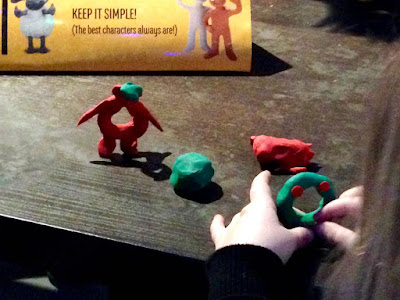 At the end everyone got to try their hand at making a Plasticine figure and film a few shots against a background.  It is brilliant that kids can get a sense of how much work - and how much fun - it is to actually make a film.  For older folk like me, it made me marvel at how technology has developed to make stop motion so much easier than when I was doing Audio Visual studies at high school. 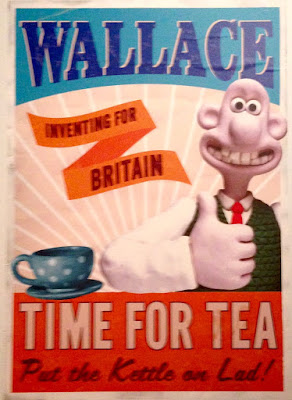 Lastly from the gift shop, here is a poster that is classic Wallace and Gromit, and classic old school Britain.  If you haven't had a chance to go yet (and you are willing to fork out $24 per adult etc), the exhibition is still on until 29 October and is a fascinating look at lots of familiar characters and lots of wonderful details.