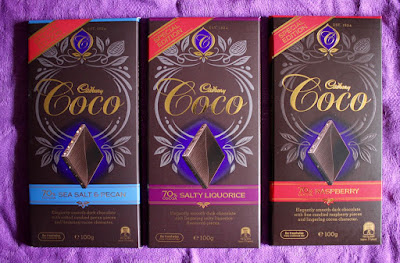 May is feeling wintery.  I know we still have a month left of Autumn but chilly winds and lashing rains have been quite common lately.  I am leaving the house in the morning with more layers of clothing on and am drinking warm mugs of tea by the heater in the dark evenings.  Let's see what is going on in my kitchen.

Chocolate is always in demand but even more so when the weather is cold.  I have enjoyed trying the new Cadbury Cocoa flavours: Sea salt and pecan, Salty Liquorice, and Raspberry.  These are pleasing dark chocolate blocks with crispy chips of flavour.  I quite like the Salty Liquorice which is quite unusual and not too sweet. 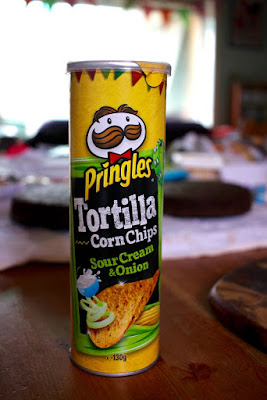 E is quite a fan of Pringles.  So I bought him a tube of these Pringles Tortilla corn chips with a sour cream and onion flavour.  We all thought they were preferable to the regular Pringles.  While I like Pringles crisps they usually taste so processed that there is very little potato involved.  The corn chips taste more real and substantial. 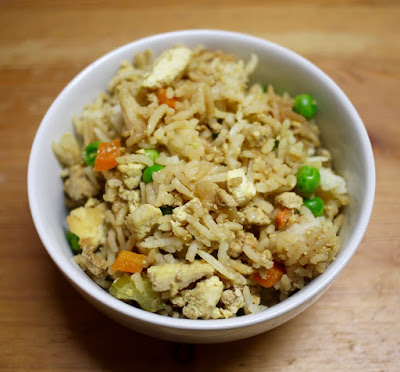 I wanted to try a fried rice with scrambled tofu recently.  I took some guidance from Kitchen Treaty and really loved the results.  The tofu was seasoned and coloured yellow with a little turmeric.  It was eerily like egg in fried rice.  But so much better.  Excuse the poorly coloured photo that I took once it was dark.  The nights darken too early for much good food photography.  I must make it again and hope to blog about it some day. 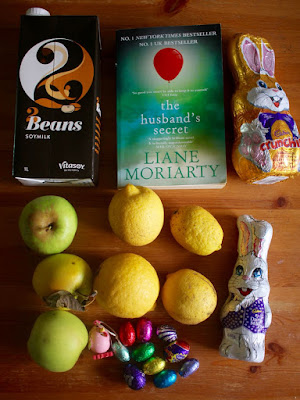 We returned from visiting family in Geelong over Easter with a few extras.  My sister Fran gave us soy milk, lemons and apples.  My mum loaned me The Husband's Secret by Liane Moriatry.  (I've just about finished reading Scoundrel Days by Brentley Frazer and look forward to something a bit lighter.)  And Sylvia was given quite a few Easter eggs.  We still have some Easter chocolate around the house. 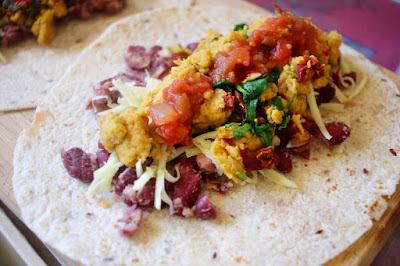 In my dreams, I would start each day with a breakfast that is savoury and filled with vegies.  Breakfast tacos fit the bill.  If only they were as easy as yoghurt and cereal.  I made the above breakfast tacos and another batch for dinner recently.  The ones above were inspired by Mary Ellen's Breakfast Tacos.  However I had chickpea scramble instead of tofu scramble, kidney beans instead of black beans and omitted the jalapenos.  I also added some biocheese.  They were good but not quick enough.  Perhaps a large batch of scrambled tofu early in the week with lots of vegies could make quick breakfasts. 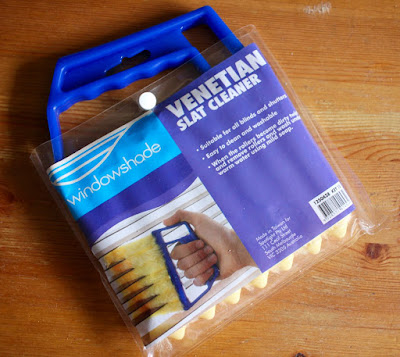 I had a weekend past where I tried to catch up around the house.  I cleaned the shower (a thankless task as it is the original shower and is never clean enough), retouched some scratches on the car (another thankless task as any touch up makes the rest of the car look like it needs a paint) and cleaned the venetian blinds in the lounge room.  I found this Venetian slat cleaner for dusting and then I wiped each slat.  Very boring.  Thank goodness for some interesting podcasts (such as one on the ABC about diet and mental health).  I was really pleased to have clean blinds but filled with longing to replace them altogether.  Then I remembered that I still hadn't cleaned the blinds in the other rooms.  I will never catch up with everything that is needed around our house. 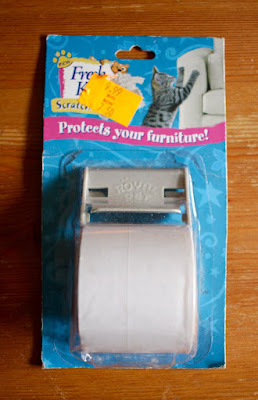 On the weekend we went to our local Pet Barn.  It is amazing how many cat accessories there are in the world.  We bought a red cat bed that is very popular with Shadow.  We also bought this Fresh Kitty Scratch Guard.  Shadow has a bad habit of scratching on the bed for attention in the middle of the night.  We have managed to reduce it somewhere by locking him in the bathroom on some nights.  Last night he was at it again so I stuck this tape the his favourite corners.  The scratching didn't last long.  Then he took up scratching at a paper bag.  Slowly slowly we make progress.

By the way, I think I mentioned that we had to put a lock on the bathroom because Shadow seemed to open the door when we put him in.  Sylvia and I watched him open the bathroom door the other day.  I was surprised at how easily he jumped up and held onto the door handle to lever it down. 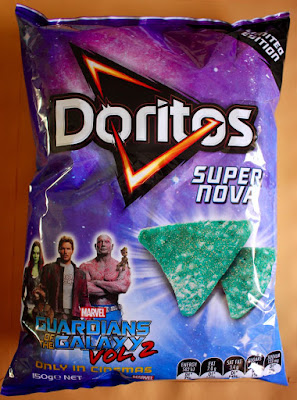 Today at the supermarket I could not resist these Guardians of the Galaxy 2 Super Nova special edition Doritos Lime and Pepper corn chips.  I have not opened them but I hope they are as green as they look on the packet. 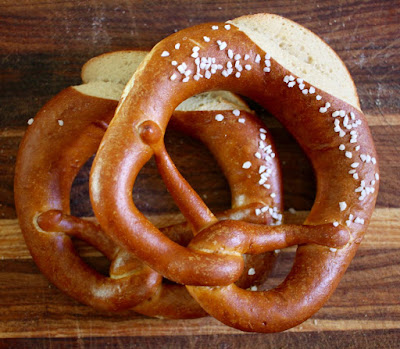 Lastly I also brought these pretzels today.  They were for a recipe for Pretzel Dumplings in sauerkraut and mushroom gravy from But I Could Never Go Vegan by Kirsty Turner.  While it is very easy to find Turkish Bread and Pita Bread in my part of Melbourne, pretzels are not so common.  Occasionally we find them at the farmers market.  Today I found some at the supermarket.  There were only two so I had to supplement with a little sourdough bread.  It was a great warming winter dinner.

I am sending this post to Sherry of Sherry's Pickings for the In My Kitchen event, that was started by Celia of Fig Jam and Lime Cordial,  If you would like to join in, send your post to Sherry by 10 May.  Or just head over to her blog to peek into more kitchens.
Posted by Johanna GGG at 22:12