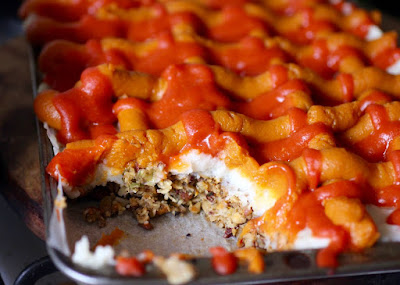 This post is an idea rather than a complete recipe.  I have often bemoaned that haggis (even the vegetarian version I make a few times a year) is quite boring in presentation.  I have tried many ways of presenting haggis.  Some more successful than others.  A month or two ago it struck me that I should pipe the neeps and tatties to make a tartan topping.  I tried it for St Andrews Day (today).  It was not perfect but had potential. 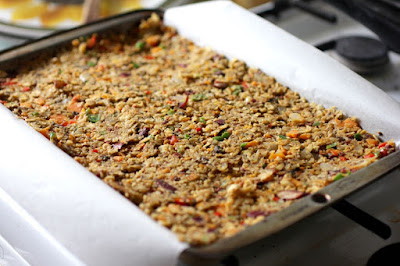 As I suspected it took me quite some time, about 2 and and half hours, with a lot of meandering as I cooked it yesterday.  Fortunately we had a quiet weekend to regroup and try and sort out the hurricane of a house.  But I did get a little distracted by The Gruffalo on the telly.  Such a gorgeous telemovie.

I made four components: my usual vegetarian (vegan) haggis (colourful with a few green beans and some red pepper added); mashed potatoes (mashet tatties); baked, peeled and pureed sweet potato (in lieu of any bashet neeps); and tomato sauce (because we didn't have enough bottled stuff). 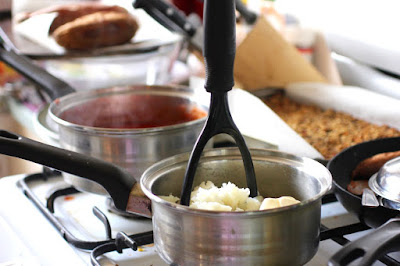 The haggis and mashed potato were great. I had imagined piping thick lines of neeps but I only had sweet potato.  It was quite thick because I baked them and only added a little butter and seasoning to the mixture before pureeing with a hand held blender.  It made lines like thick pipes across the potato.  I think that sweet potato is thicker than neeps or turnips but I am not sure that the thick piping nozzle was the right one.

I had intended to use bottled tomato sauce but didn't have much.  So I made up a sauce by frying onions and garlic, then adding a 750ml jar of passata, 1/4 cup tomato paste and mustard, maple syrup, salt and cinnamon.  It was so thin that I used 1/4 cup of cornflour but it was still too thin.  In an ideal world I would have had more time to reduce it.  And finding the right consistency is not easy. 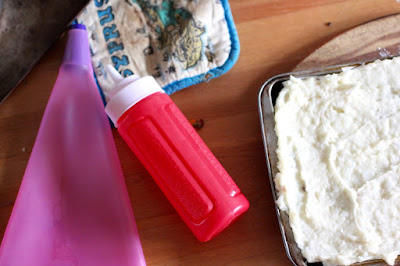 However I want to try again and I think next time I might spread the mashed potato on, then a layer of neeps, then some thin piping of potato and a thicker tomato sauce, with the lines spaced out a bit more.  If I was better with piping I would be tempted to try it with ramekins so it was served up neatly rather than landing on the plate in a pile.  Sadly my piping skills are in need of more practice.  However I am surprised I could not find any pictures from some enterprising restaurant making it this way. 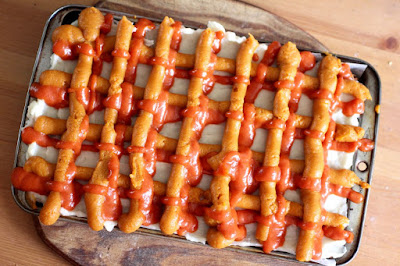 Most importantly, it was absolutely delicious.  In fact I really loved having the sweet potato and tomato sauce with the haggis and potatoes.  Sylvia screamed at being asked to eat a mouthful while E and I went for seconds.  We ate the leftovers tonight.  Next time I will use a ceramic dish because I don't like leaving dinner overnight in a metal tin (it was my slice tin) and it was very messy to move it to another dish.

Dinner tonight was quite a scramble of the haggis, sweets and tatties (if I can get away with called sweet potato "sweets").  But E refrained from his favourite saying of "Inverness, what a mess" as it was also very yummy.