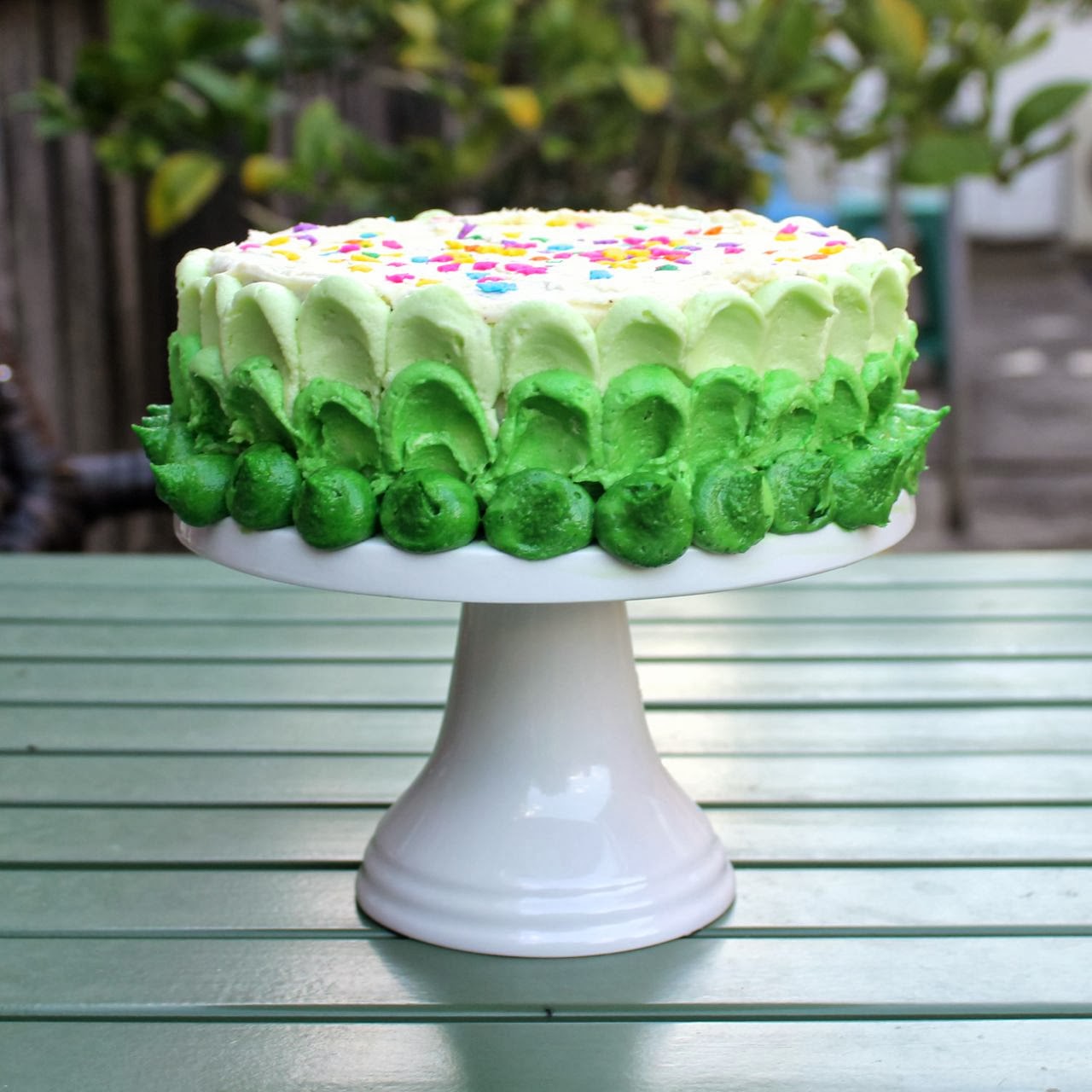 Birthdays mean time for indulgence.   So for my birthday, I decided to try out an ombre decorated cake I had seen online.  Fancy grown up cakes aren't my forte.  At least I can always whip up a chocolate cake.  Even if it is 39 C.  Sylvia and I baked the cake in the morning, went to the cinema to see Cloudy with a Chance of Meatballs II and came home to decorate it.

I chose a new chocolate cake recipe.  I have been seeking one that is made of pantry ingredients, is decadent but not extravagant, will hold its shape and is easy to make.  Baking the cake was fairly straight forward.  The main drawback was that it used three bowls.  It tasted fantastic.  Rich and dense but not so intense you can only eat a sliver.  I think it might be a keeper. 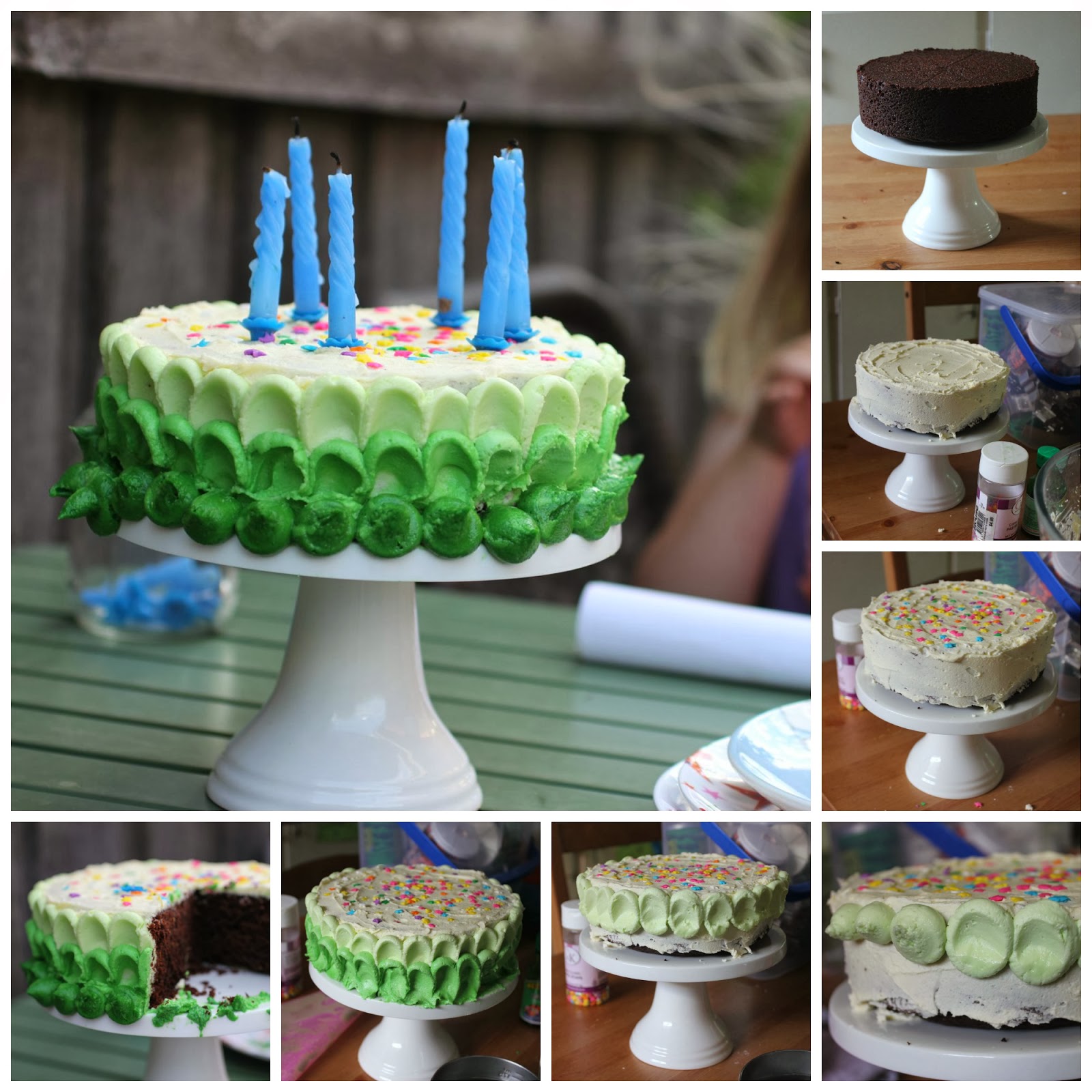 Decorating the cake was slightly more tricky.  It looked easy on Lick the Spoon.  I think I just need a little practice.  Using my silicone piping bag made it easy to pipe blobs of icing around the side.  Smooshing each blob down neatly with a spoon was a matter of convincing the icing and spoon to part ways.  I found it easiest if I dipped the spoon in hot water and dried it on a clean cloth every now and again before pushing the spoon into each blob.  A taller cake would have made the effect look more impressive.  Maybe next time. 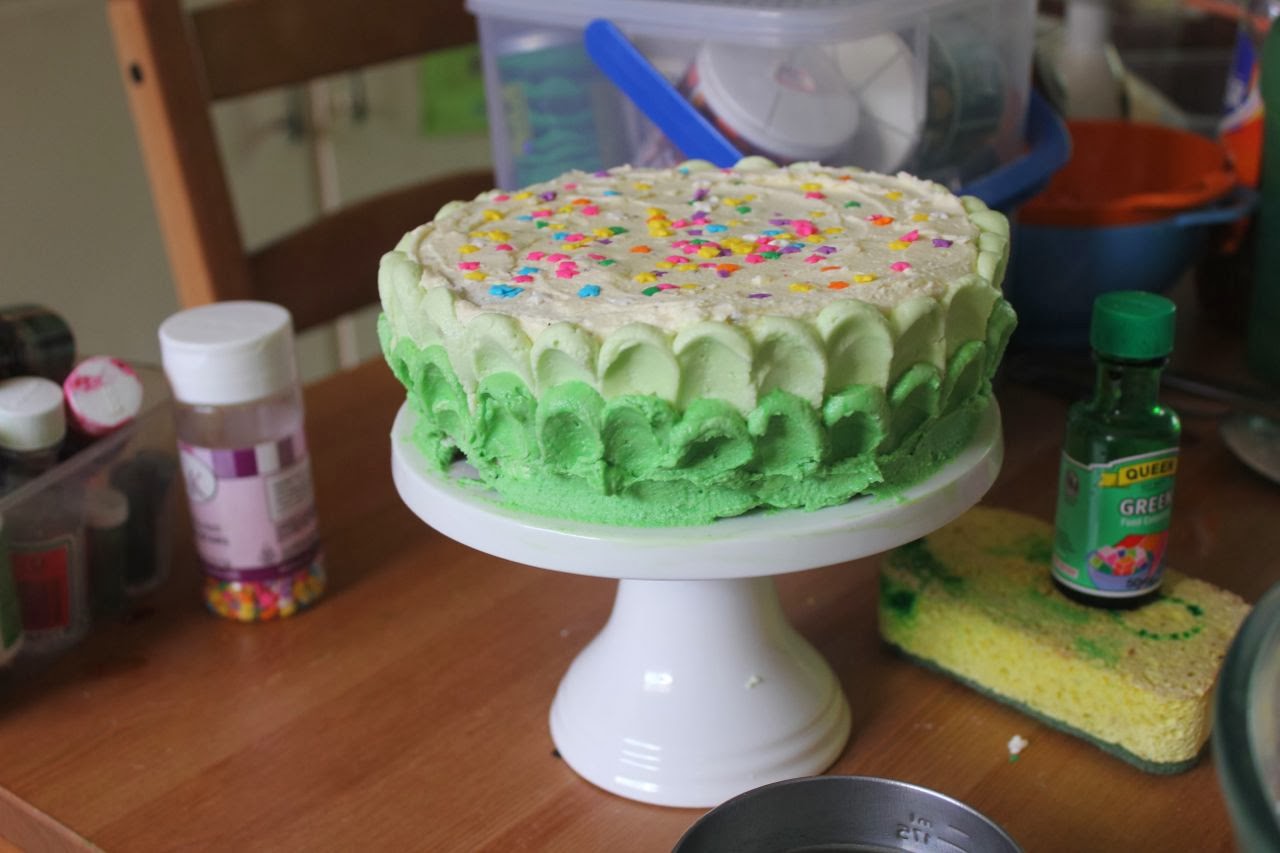 Getting the icing on wasn't the worst of my problems.  I found that my cake stand was slightly too small.  You can see that I have actually scraped some of the icing from the bottom on the above photo.  If the plate had been bigger it wouldn't have been such a problem.  However even with a bit of a scrape, some of the lowest blobs were melting and dropped off the cake in the heat.

My other issue was getting the colours right (for the ombre effect).  You may notice that my two bottom colours looks quite similar.  I used a lot of food colouring and finally decided it was quite enough.  If I did this again I think I would try and find a powdered colouring that hopefully would be more potent and not change the consistency of the frosting so much.  It used a lot of icing but looked so much prettier than my usual cakes.  The sprinkles on top were Sylvia's artwork! 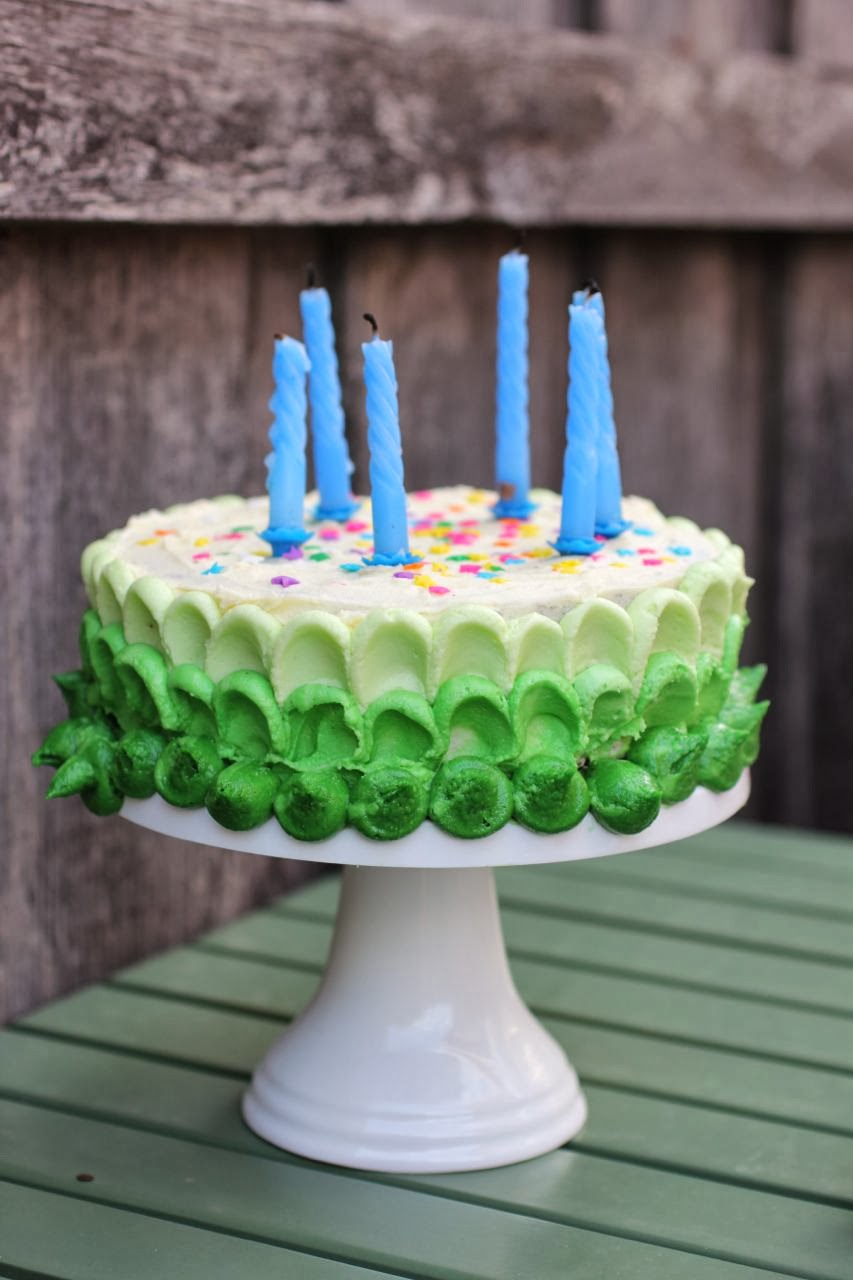 Being a hot day, we ate dinner outside.  (I will tell you about the haggis chiko rolls soon.)  The cool change had arrived.  It was such relief to sit outside with the breeze.  I didn't even mind when the candles kept being blown out by the wind.  Sylvia decided to take the cake inside and light the candles in the dark.

I recognised this as a scene from her favourite cartoon, Peppa Pig.  In the episode called "Mummy Pig's birthday". Mummy Pig has to wait outside while Peppa and her family get the cake ready.  On the show, Mummy Pig sits outside and twiddles her thumbs.  Whereas I watered the garden and pulled out a few weeds and checked the citrus trees for gall wasp.  It amuses me that the show is written from a child's perspective where the parents just have nothing to do once out of their sight! 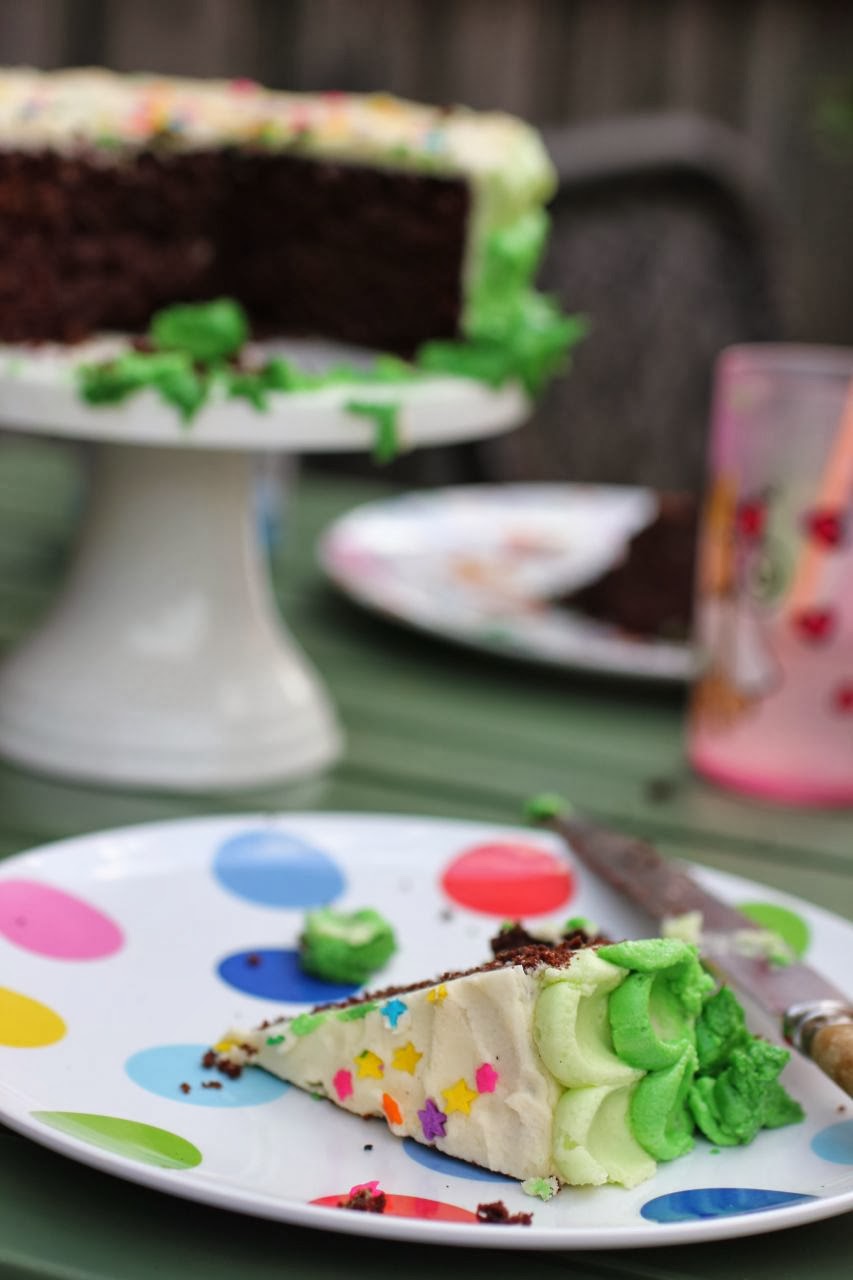 We all loved the cake.  A small one was just enough for us to eat one night and have enough leftovers to enjoy without feeling overwhelmed.  Sylvia loved tasting the icing when we were decorating but she thought it too sweet on the cake.  Kids!  This was my perfect birthday cake.  Rich dense chocolate cake with lots of green icing and a sense of achievement thrown in!

I am sending this cake to Karen at Lavender and Lovage for the Tea Time Treats (which she hosts with Janie from The Hedgecombers).  This month the theme is Chocolate.  The original decorated cake I was imitating had pink icing which would make this perfect for Valentines Day.

Melt chocolate and butter in a small mixing bowl (in the microwave or if on stovetop use a small saucepan).  Set aside.

Mix the dry ingredients in a medium mixing bowl.  Set aside.

Beat egg and egg white for a minute or two until the colour is lighter and the eggs are frothy.  Briefly bean in yoghurt.

Bake for about 50 minutes or until it smells cooked, the side of the cake is pulling away from the side of the tin and the skewer inserted into the centre comes out cleanly.  Sit 5 minutes.  Cool on a cake rack.

Buttercream frosting (or icing)
Adapted from Birthday Cakes for Kids by Annie Rigg.

Use electric beaters to beat butter until creamy and then gradually beat in icing sugar.  If the icing is a little stiff to spread add a drizzle of water or milk to loosen it up.  Stir in food colouring as desired.
On the Stereo:
Yes Virginia... - Dresden Dolls