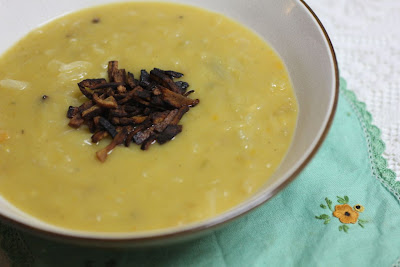 I have been clearing out some old foodie magazines.  A pile of choice recipes have been ripped from their pages and sit by my computer.  One such recipe grabbed my attention as perfect for St Patrick's Day.   The Potato and Cabbage Soup in the BBC Australian Good Food Magazine recipe seems to be based on this one.  I veganised it by substituting my favourite tofu bacon for the piggy bacon.  It was lovely, though it looks so so different to the photo. 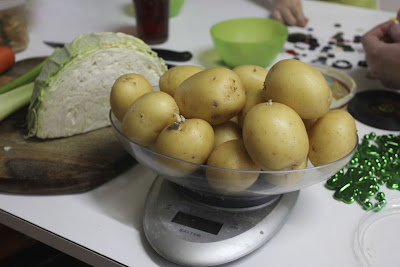 You may notice in the above photo that my potato are beginning to grow eyes.  They needed to be used.  The cabbage is of the drum variety, as recommended by the Australian recipe, rather than the greener Savoy recommended by the British recipe.  Drum cabbage is quite easy to buy in quarters here.  In the background, Sylvia and E are making button bracelets!  My kitchen is like that. 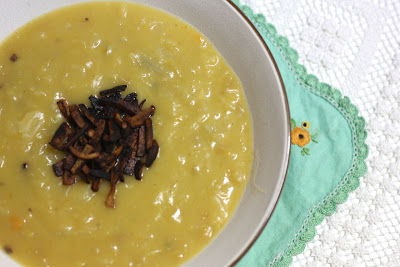 The soup took me far longer than the recipe suggested, as so often happens with my cooking.  In this instance, I ended up serving E and myself dinner after Sylvia had gone to bed so we could enjoy it rather than gulping it down so we could put her to bed at a reasonable hour.  The pureed potato made a creamy base for the soft cabbage and chewy tofu bacon.  A soup with lots of interesting texture and plenty of flavour.

I am sending this to Deb for Souper Sundays.

Heat butter and a glug of olive oil in a stockpot.  Add the onions and fry for a few minutes.  While the onions are frying, prepare and roughly chop the carrot, celery, potato and garlic.  When all the vegetables are in the pot, cook over medium heat about 5 minutes.

Add water, marinade, stock powder and salt to the pot.  (It is quite salty at this stage but the cabbage absorbs some salt later.)  Simmer for about 20 minutes or until potatoes are soft.  While the vegetables are cooking, fry tofu bacon (facon) in a glug of olive oil on a non-stick frypan until browned.  Remove about 2/3 and then continue frying remaining facon until crispy and slightly charred.  Drain both batches of facon on kitchen towel and keep separate.

Puree the potato mixture with a hand held blender.  Add cabbage and the larger batch of facon.  Simmer for about 30 minutes or until cabbage is cooked.  Check and adjust seasoning (it benefits from lots of black pepper).  Serve with remaining facon sprinkled on top.

On the Stereo:
Setlist: The Frames
Posted by Johanna GGG at 21:24