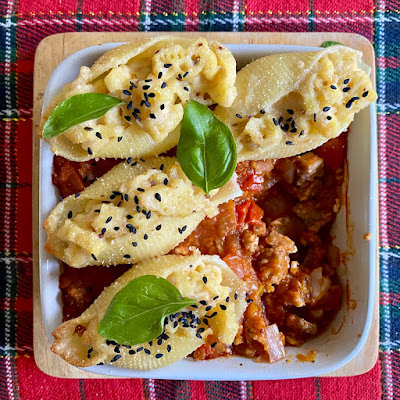 As we make our way through the no man's land between Christmas and the New Year, we plough through leftovers and try to remember what the day is.  Making the most of festive leftovers is always fun.  I always make plenty of nut roast because there is nothing like thinly sliced cold nut roast on a salad sandwich.  My mum also gave me some of her leftover roast potatoes and pumpkin. 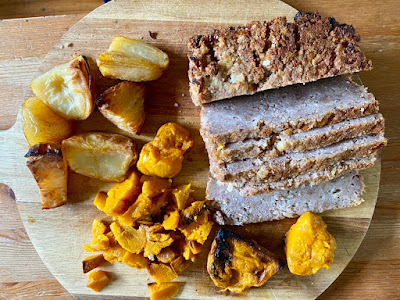 We always have a roast dinner at Christmas and I take along a favourite nut roast.  However roast dinners are a regular meal in my family so this is not just for Christmas leftovers.  I was inspired to add the leftovers to pasta by Sylvia's request for mac and cheese for tea.  I had jumbo pasta shells and had wanted to try stuffing them with mac and cheese.  It seemed the right thing to do to cook the shells on a tomato sauce.  And bolognaise sauce with chunks of nut roast is a favourite of mine. 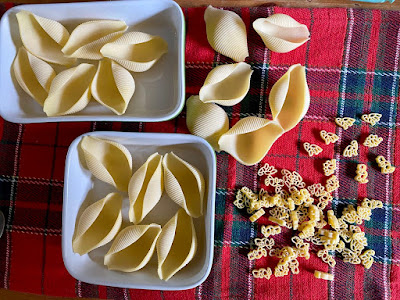 Some people find leftovers annoying but I consider them a win.  Sadly I did not come home with any leftover cauliflower cheese but if I had, I would definitely consider stuffing these jumbo pasta shells with cauliflower cheese, diced roast potatoes and peas (if they are leftover too).  As I only had a few roast potatoes and Sylvia wanted mac and cheese, I used this for the stuffing, with a few diced roasted potatoes.

Sylvia had loved a cute dinosaur in a snow globe at the shops that day so we used the dinosaur pasta in the mac and cheese.  I lazily put the dinosaurs and the jumbo shells in the same pot rather than cooking separately.  I had thought I might need to cook the shells more but they were cooked enough, though rather toothsome.  Considering they cooked more in the oven I thought this was fine though they did dry out slightly as they were sitting on top of the sauce rather than in it. 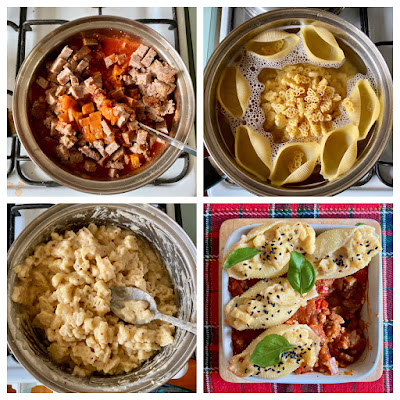 The stuffed jumbo shells were The bolognaise sauce was one of my regular tomato sauces that had onions, garlic, tinned tomatoes, maple syrup, worcestershire sauce, apple cider vinegar, and tomato paste.  I added diced nut roast and diced roast pumpkin.  If I had leftover gravy I would consider using this in the sauce - probably by adding some fried onions and tinned tomatoes. I am still not sure where the cranberry sauce comes in but I always have some leftover! 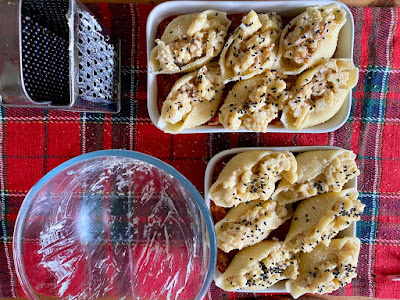 The next day, my brother visited.  He has finally been able to come from his interstate home to see family and friends in Victoria after borders were closed most of the year.  It was nice to have him to lunch.  I made sourdough flatbreads and stuffed them with leftover bolognaise sauce and cheese.  Leftovers just keep giving! 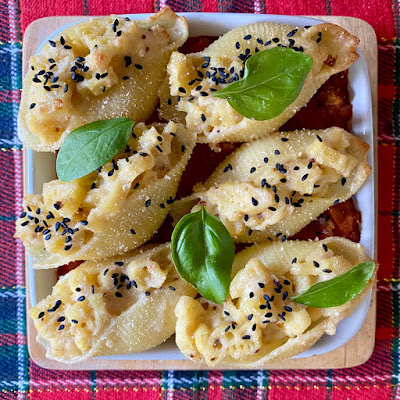 Then we headed off to see Wonder Woman 1984 which was a fun movie.  As is pretty standard in Covid days, we had to book.  I don't mind booking most of the time.  It has helped me get the pool more because once I have booked I am locked in, rather than just finding myself too busy to go.  But at this time of the year when I can't get the day or date right, it has been a bit challenging.  I have had confusion when booking a bike service, a car service, lunch with a friend, and even a sales consultant appointment at the Apple shop to look into buying a new laptop. Yes my laptop is driving me a bit crazy and turning itself off without warning too often.  But it is not just me.  I visited a friend today who did not know it was New Year's Eve!

I started writing this post a few days back but as it is now New Year's Eve, it is time to bid good riddance to 2020.  In our state of Victoria, we have just had the 6 new Covid diagnoses - the first community transmitted cases for 60 days!  I am glad we are bunkering down at home tonight and was not planning or attending a party for 30 people. Just this morning we were told that permitted numbers in a private home were reduced from 30 to 15.  I don't know if it would be worse to tell people we can't fit them in or to be one of the people rejected from a party.  I hope that you have a fun and safe New Year's Eve and that 2021 is far better for everyone.

Stuffed Giant Pasta Shells on Bolognaise for Leftovers
I haven't specified amounts as I find that when dealing with leftovers, it is harder to have control over quantities.  I wrote about my family roast dinner years ago and recommend you go there if you want recipes for roast vegies, cauliflower cheese or gravy.  My standard macaroni cheese and some other versions of the mac and cheese recipe are linked above.

Cook jumbo pasta shells.  Mix bolognaise sauce, diced roast pumpkin and diced nut roast.  Spread on the bottom of an oven dish.  Mix diced roast potato and peas into cauliflower cheese or mac and cheese.  Stuff this mixture into the pasta shells.  Place on the bolognaise sauce.  Sprinkle with sesame seeds and breadcrumbs (or more grated cheese).  Baked in a moderate oven (180 C) for about 20 minutes or until crispy and golden brown.