Mac and Cheese Pancake: and brunch for dinner 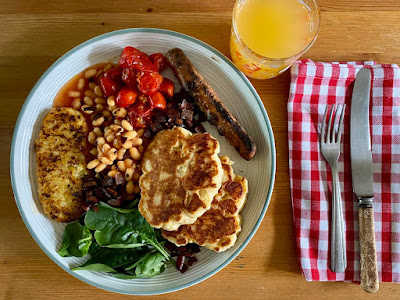 We wanted something savoury for Shrove Tuesday.  And there was leftover mac and cheese in the fridge.  Pancakes are made on Shrove Tuesday to use up food before Lent begins.  So it is in that spirit that we made pancakes full of mac and cheese.  And served them as brunch for dinner!

When we go to the Pancake Parlour they have a breakfast pancake dish but not in my style.  So I made the sort of pancake fry up that I wish for: pancakes, hash brown, vegetarian sausage, fried tomatoes, tofu bacon, baked beans and spinach, all served with tropical juice.  I had wished I had the energy for vegan omelette and that I had a few mushrooms to fry up but it was pretty good and so filling. 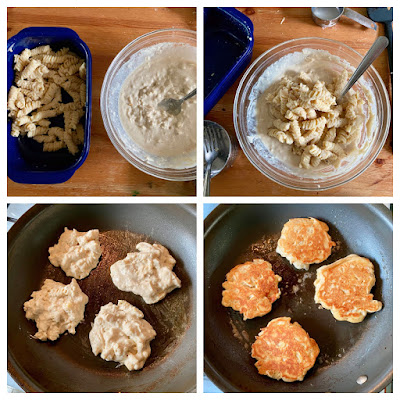 The pancakes were just a matter of mixing mac and cheese with an adaption of a favourite pancake mixture.  I halved the pancake mixture I usually do to allow for it bulking out with the pasta.  Oddly enough I didn''t taste a lot of the mac and cheese in the fry up.  Perhaps it would be different with macaroni pasta but I only had spirals when  made the mac and cheese the previous night.  But after tea I took out some caramel sauce and its sweetness worked really well on the salty cheesey pancakes.

Mac and Cheese Pancakes
Inspired by The Food Network
Makes 6

Mix all ingredients (except margarine) to make a thick batter.  Let sit 5 minutes.  Meanwhile heat frypan over medium heat.  Rub a little knob of margarine to cover the pan.  Drop heaped dessertspoons of batter on the pan.  It takes quite a while (5 minutes or so) and in this mixture bubbles didn't appear.  It should be golden brown.  Flip over and cook another few minutes until browned on the other side too.  If not brown enough, keep flipping.

On the Stereo:
Word Gets Around: Stereophonics
Posted by Johanna GGG at 22:26