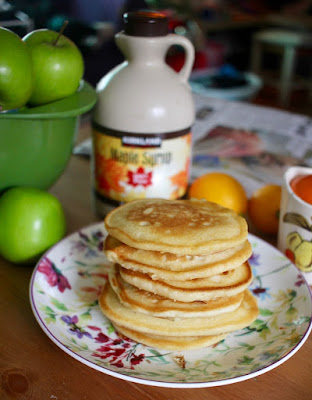 Sunday morning brings us apples from the farmers market, lemons from the backyard, and an aborted cupcake flour and sugar mixture.  Plus two kids in the corner playing Exploding Kittens and waiting for breakfast at the end of their sleepover.  Time for pancakes!  They were much sweeter than usual but surprisingly good - the pancakes not the girls (though the girls were well behaved too).

Let's rewind to Friday afternoon when I was at a meeting listening to one of the senior managers talking about strategy.  I felt a bit like Ferris Bueller's girlfriend in class just before she was told her grandmother died.  Luckily I had my phone on silent when Sylvia started texting to me to ask for my best vanilla cake recipe.  I am not a big vanilla cake fan so I texted her to go to taste.com.au or Nigella Lawson. 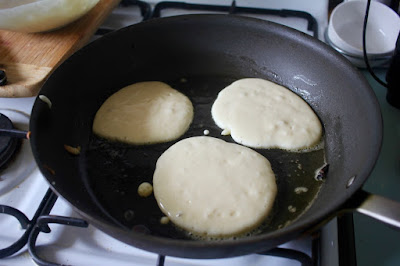 When I arrived home on Friday the kitchen looked like the Swedish Chef had been at work.  Mysteriously, as well as a half filled mixing bowl, cupcake tins of batter and plentiful drips, there was a bowl of flour.  Sylvia explained it was flour and sugar and baking powder because she had started a unicorn cupcake recipe and found we did not have sour cream.  I wish I had been there to help but it is all part of learning to bake to stumble upon roadblocks. 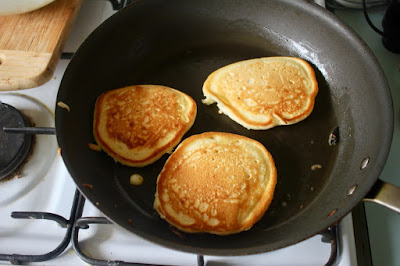 So this Sunday morning I set out to make the batter into pancakes, using a favourite fluffy vegan pancake recipe for guidance.  Did I mention there were no eggs or milk (not even soy milk) in the house!  The batter seemed on the thin side and was quite frothy once I decided to add the vinegar but it cooked up a treat.  Probably due to all the sugar.  These pancakes have much more sugar than I usually add.  So much sweet stuff gets dumped on the pancakes that they don't need much sugar, as a rule.  Another odd thing about these pancakes was that even when I greased the pan well, the pancakes needed a lot more coaxing than usual to get them off the pan. 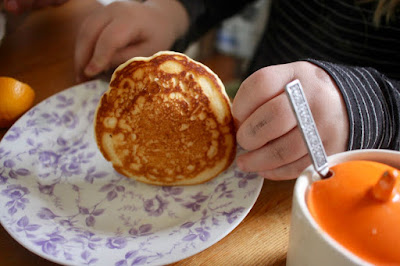 The pancakes were rather good: soft and fluffy, albeit quite sweet.  I am not sharing these pancakes to encourage you to make them but rather to share my solution as to how to rescue this cake mix.  But if you are after a dessert pancake to serve with a dark chocolate sauce and lots of fresh berries, then I think these pancakes might be just what you need. 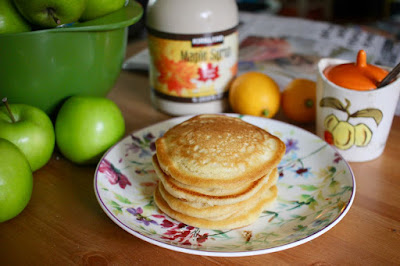 Mix all ingredients together.  Heat frypan over medium heat and swirl a small knob of margarine around the pan.  Drop about 2 dessertspoonfuls for each pancake.  Cook until mixture is bubbly, and then turn and leave for about 30-60 second (ie not too long).  If they are really pale you can continue cooking until they are golden brown.  Be very gentle easing the eggflip/spatula under the pancakes as they seem to stick even to a nonstick frypan with margarine.  Eat hot or at room temperature

On the Stereo:
Down in the Valley: Handsome Family
Posted by Johanna GGG at 21:59