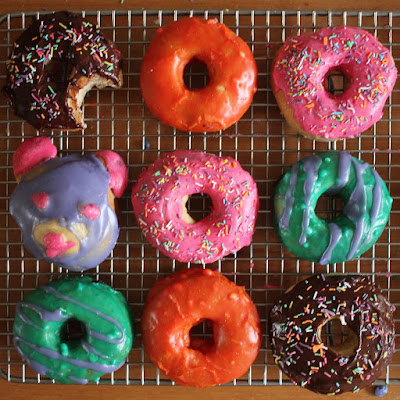 After a long wait, yesterday was a glorious spring day of 29 C as the school holidays started.  So too, yesterday saw the end of my wait to find a good overnight sourdough doughnut recipe.  I've looked, I've mulled over it, I've gone back to my yeasted doughnut recipe, I've even tried a really unsuccessful doughnut recipe last weekend before finally hitting the jackpot yesterday. 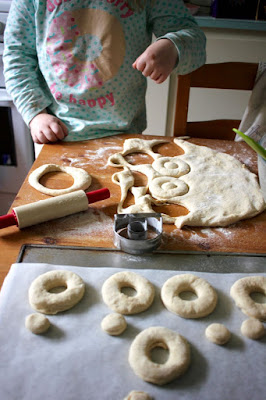 I bought a doughnut cutter some years ago and it has turned out to be a very useful investment, especially now that Sylvia is suddenly into all things doughnut.  It means that I have always made yeasted doughnut dough that is rolled and cut out.  Recently I have been looking for a doughnut tin that I can pour batter into so I can use different doughnut recipes.  (Actually I dreamt I bought one last night but it had some weird grills on it that did not make sense!) 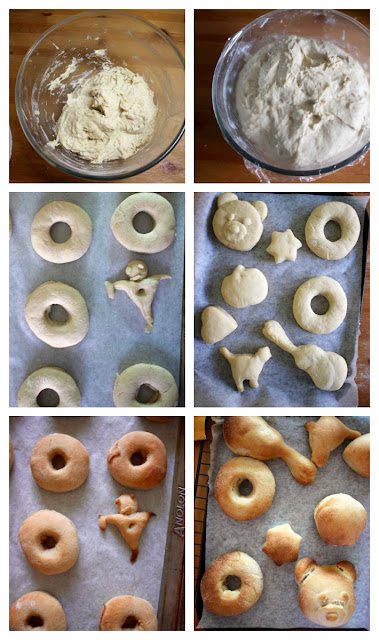 After looking for the recipe I wanted, I ended up using my overnight sourdough bread recipe, my yeasted doughnut recipe and Gemma's no knead donut recipe.  I gave some thought to what was needed for the dough - a bit of sweetness and more buttery richness than usually found in my regular bread dough.  The dough seemed quite sticky but rose well and was lovely and soft once baked.  However I was most pleased that it was quite easy to shape with only a little flour. 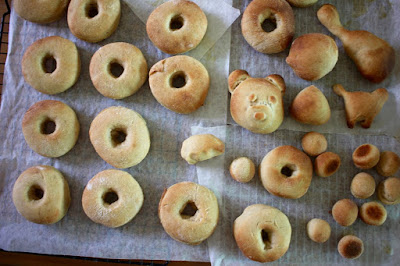 We cut out lots of doughnuts.  After lots of rings, we got out cookie cutters and did some shaping.  I made a bear face (that looked slightly evil once iced).  Sylvia made a funny person we decided was like a baby Voldemort so she made a wand for him and stabbed him in the heart (as you do if you get the chance with Voldemort).  We also used cutters to make a cat that ballooned up and a guitar that looked like a drumstick once baked. 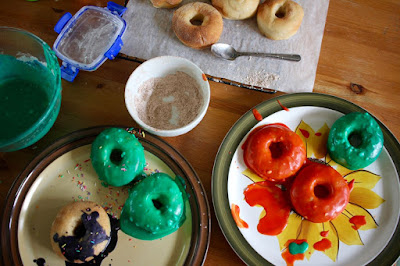 Then let the doughnuts cool while we went to gymnastics and Coburg Carnivale.  Sylvia dipped some doughnut holes in cinnamon and icing sugar.  E and Sylvia got home first and had a messy time of glazing doughnuts.  And they forgot to put sprinkles on before the glaze set.  So later we did a bit of drizzle. 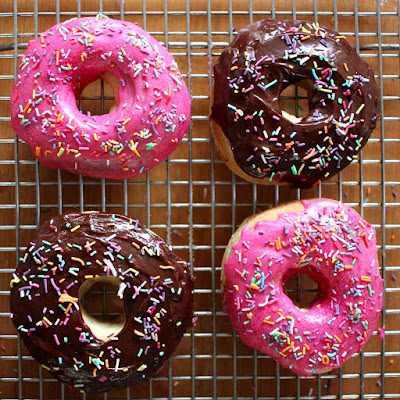 Once I got home we went more traditional with pink icing and sprinkles and a lovely chocolate gaznache.  The ganache tasted so much better than the sweet sweet icing.  (In my humble opinion!)  Sylvia and I had a lovely time doing a doughnut photo shoot once they were decorated. 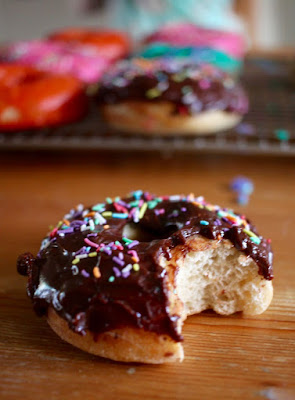 I baked the doughnuts.  I am too intimidated to fry doughnuts.  And fried doughnuts are best eaten hot, so there is the practical matter of when to make them.  Though baked doughnuts are not quite up to the standard of the Queen Victoria Market hot jam doughnuts, they are pretty good if you are icing them.  These were even ok the second day (with chocolate ganache) though not nearly as good as on the day of baking. 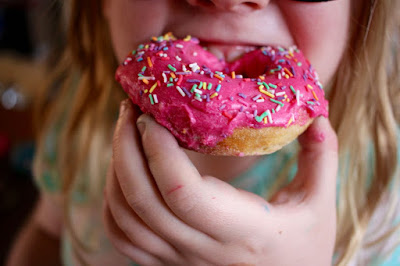 Today we had some leftover doughnuts with lunch.  Which meant that I asked Sylvia to look for healthy snacks when we were out.  This is why I found myself this afternoon sitting on the nature strip outside Record Paradise listening to Underground Lovers (too noisy inside) with Sylvia asking me for some soy crisps.  It occurred to me that I could never have imagined this moment many years ago in the days when I saw the Underground Lovers in grungy pubs.  Nor could I have ever anticipated my adventures with baking sourdough doughnuts.  I am sure the journey is not quite over yet so stay tuned for more sourdough doughnut loving!

Mix all ingredients in a large mixing bowl.  It will be quite sticky but should come together into a ball.  Cover with a tea towel for 30 minutes and then knead about 15 minutes in the bowl with well floured hands.  Cover with clingwrap and leave overnight about 8 hours if the weather is good.  It should be about double in size.

In the morning, carefully scrape the dough out onto a floured surface.  Using floured hands pat down to about 1 cm thickness.  Cut out using a doughnut cutter or just cut into rounds or whichever shape you like.    Place shapes on baking paper on a tray and leave covered (I used the clingfilm off the mixing bowl) for 1-2 hours until the dough has got a little puffy.

About 15 minutes before dough is ready, preheat oven to 200 C.  Cover doughnuts - I use foil but if you have a large dish with a lid that is fine.  Bake doughnuts for 20 minutes, remove cover and continue baking for a further 10-15 minutes until a light golden brown colour.

Cool on a wire rack and ice as desired.

NOTES: we did some icing of icing sugar, butter and food dye with sprinkles but my favourite was a chocolate ganache style icing that I made by melting a small handful of chocolate melts with a spoonful of butter and then adding a little milk and icing sugar to get the right consistency.  I left a few doughnuts out overnight.  The ones with ganache were fine but the icing got a little watery.  Some doughnuts went in the freezer once iced but would probably be better to go in the freezer before baking.

On the Stereo:
Ruby: Killjoys
Posted by Johanna GGG at 22:49