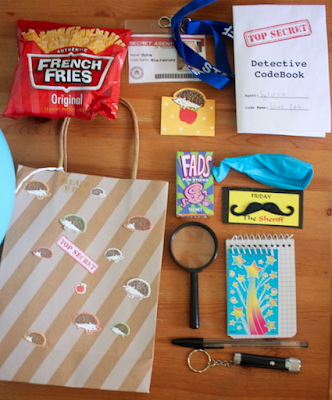 This year Sylvia had a hard time settling on a theme for her 8th birthday party.  It seems parties have to have themes or be an outing these days.  She finally chose Hedgehog Detective.  Perfect for a girl who loves hedgehogs and enjoys spying on the neighbours with her friends.  We had lots of fun planning "detective" (and spy) activities.

Invitations:
We made invitations to let Sylvia's school friends know that their mission was to undertake top secret training  should they choose to accept it.  I am aware of how grown up they are getting that they all read the invitations themselves.  With a big smile. 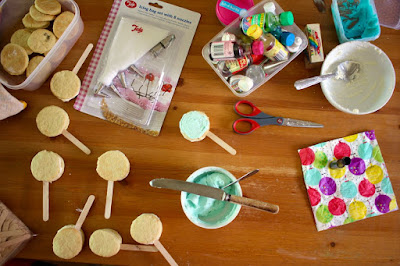 Magnifying glass biscuits:
While trawling the web for party ideas, we found these magnifying glass cookies.  Sylvia insisted we make them.  I baked the biscuits using this recipe.  However baking late at night can lead to mistakes.  Like putting in 5 times as much milk.  (It said 1/4 cup milk, not 1 and 1/4 cup milk.)  I just took a part of the mixture and added flour until it was a smooth dough.  They weren't as thin as I had hoped but were sturdy enough.

We iced them with buttercream icing.  It wasn't too difficult.  I used a ziplock bag snipped at the end.  At the last moment, I realised I did not have any black food colouring.  Sylvia found some black chocolate colouring.  In the bowl it looked dark grey but on the bikkies it looked black enough.  The main problem was that we only did them on the morning of the party.  Sylvia packaged them up for her friends in a cellophane bag with a ribbon.  But the icing was still a bit soft and some got smudgy.  Making them the day before would have helped.  Though I am not sure if the buttercream icing is the best for setting hard. 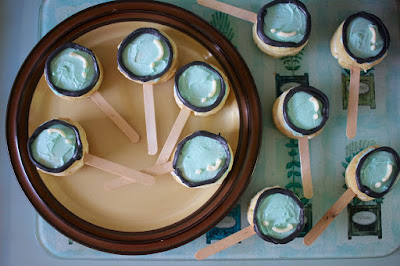 Party bags:
Our next challenge was the party bags (see top photo).  Sylvia loves a party bag full of lollies but this year we kept the party bag sweet food to a minimum.  Instead we agonised over when to hand it out.  Finally we decided it was best to give one to each guest as they arrived.  Partly because they could then wear their ID card for the whole party.

I spent one afternoon scouring the $2 shops for fun stuff to put in the bags.  I was pleased to find small magnifying glasses.  We also gave each kid an ID card, a fake mustache, a torch, a pen and notepad, a detective codebook, Fads and French Fries to eat, a balloon and a hedgehog thank you note from Sylvia.  I felt a little politically incorrect giving out Fads (called Fags in my day because they look like a little box of cigarettes) but it seemed to fit the theme perfectly.  As did the French Fries crisps. 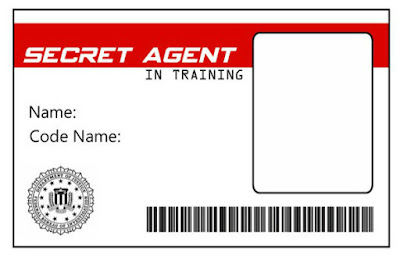 ID cards and spy names:
Making the ID cards was fun but not easy.  We used blank cards from this spy party printables.  The hardest part was finding photos of each kid looking directly at the camera and not making a silly face.  It should not be that hard but it was.  I even ended up asking one parent to help me find a photo.  Next we had to work out how to allocate spy names.  I didn't want them choosing ones that would cause friction or too much hard work for the kid.  (You picked my name, I don't like this name, I can't think of one etc etc)  Finally we decided to name them after their month of their birthday and a colour.  Such as Blue February and Red March.

Arriving at the party:
When the kids arrived, Sylvia had some hedgehog colouring-in pictures but it was really the party bags that took their attention.  They had fun going through them together.  I was amused at how much they loved the mustaches.  Most of the kids wore them for a lot of the party. Having the codebook in the party bag gave them something to read and muse over.  We included some rules for fun: 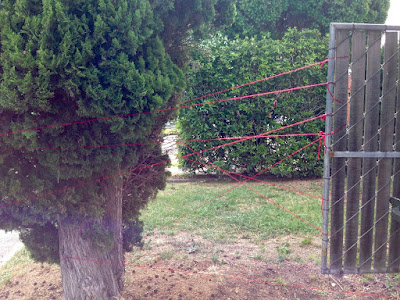 Detective/Spy Training:
Once they had all arrived and had fun with the party bags, we took them outside for hedgehog training.  I had planned to hold all activities out on the grassy lawn.  However it was quite hot on the day (28 C) so we had some activities under the carport.  We still set up the red wool which was wrapped around a tree and tied to the side of a fence for the laser challenge.  The kids had to climb through the red wool lasers.  I had originally intended on buying red elastic but it was not easy to source and I had the ball of red wool which worked fine. 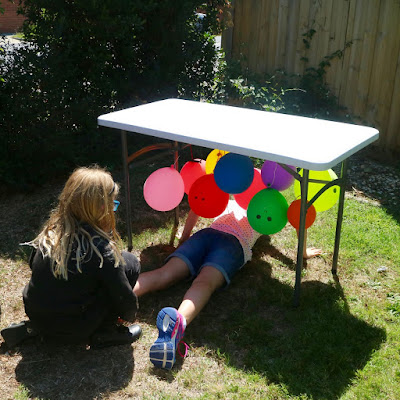 I also loved the idea of the kids crawling under balloons hanging off a table. Perhaps it appealed because Sylvia loves balloons.  And it was a silly kids version of spy training.  You can just imagine Maxwell Smart doing this.  I was quite inspired by this Spy Training post.

Then we had planned some activities.  Sylvia and I had a lot of discussion about them.  The main thing we agreed on were hoops.  I had thought kids would jump or hop through.  On the evening before I wrote up some training notes such as "5 high tuck jumps in case you need to look over a fence".  However as there were 5 kids and 5 hoops they mostly played with their hoops but did a bit of the planned jumps.  Then I had planned to present the kids with certificates.  My mum ended up doing this while I supervised the hiding of the clues for crack the code. 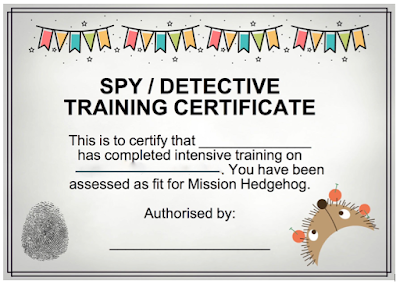 Crack the Code Treasure Hunt:
The crack the code clue game was a group effort.  I had put them into a code book.  Then E had written up the codes while I was baking.  We had decided to give each kid their own three clues to crack.  This meant everyone got a turn but it also meant 15 clues in 3 different ciphers.  Here are the places were hid the clues

1. Teddy Bear’s Tail page twenty three
2. Under pillow on Sylvia’s bed
3. Behind cushion on purple couch
4. Beneath a cushion at kitchen table
5. Behind the nurse doll on blue sofa

6. Behind thistle sign on verandah
7. Front garden letterbox
8. In Sylvia’s bike basket
9. Back garden beneath fairy village
10. Back garden behind lemon tree 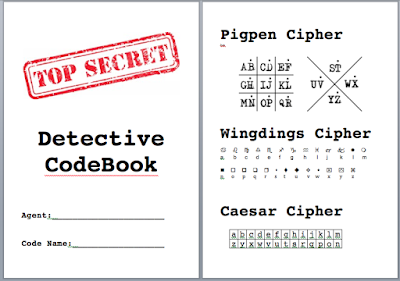 My nieces Quin and Maddy were assisting us with setting up the party (and very helpful) so they were given the task of hiding the clues with E.  I had waited til the kids were outside so they didn't accidentally find a clue when inside.  However hiding clues in code was extra challenging and had to be done 3 times before they got it right.  Meanwhile we plied the party girls with water, grapes and the French fries crisps from their party bags.

The kids had fun looking for the clues and we only had a couple of clues mixed up.  It was quite interesting seeing how each child approached it.  I helped explain the ciphers, which was challenging but they seemed to enjoy it.  In fact, once the kids left the party, Sylvia suggested I do her more codes.  Sadly, I was too busy collapsing to oblige.  Everyone also loved their magnifying glass bikkie that we wrapped in cellophane and hid in the final spot of the clues game as the treasure. 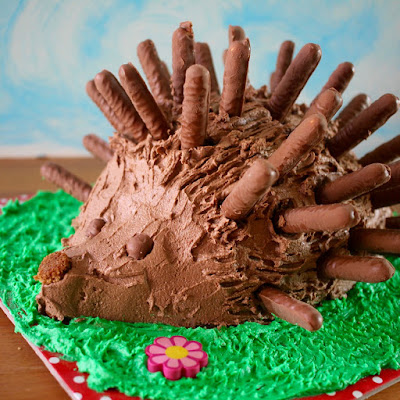 The Cake:
Then suddenly we were racing to get the kids to do the hedgehog birthday cake (which I wrote about separately) - singing, cutting, eating - before their parents arrived.  I had meant to put out the surplus magnifying glass bikkies but forgot.  I don't think they were that hungry by then.  We also had some of my mum's delicious hedgehog slice (given that the official theme was Detective Hedgehog).  Sylvia told me it was the best party.  I was pleased that we weren't focusing on food this time (after parties with cupcake decorating and a pinata) and we managed to avoid pass the parcel. 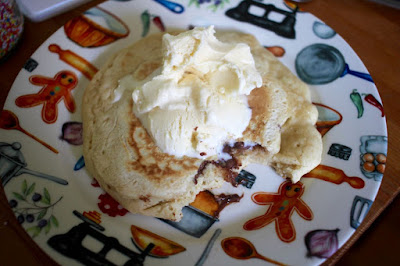 More birthday activities:
There was plenty of sugar in other birthday celebrations.  On Sylvia's birthday she had pizza and chocolate pudding while we watched a video.  The oven went out while baking the chocolate pudding so it took ages.  On the weekend after her birthday for a treat Sylvia had some nutella stuffed pancakes with ice cream and sprinkles. 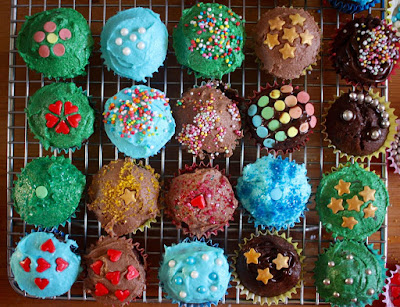 Meanwhile she took cupcakes to school for her birthday. I baked the chocolate cupcakes and she decorated them, making sure there were enough for each kid in her class and her friends who aren't in her class.  It seems they went down well.

Finally we also had a celebration down in Geelong with her cousins.  The main activity was playing at the local pool with its children's water activity area.  Then we went back to my parents' house where my mum had been baking.  We had pavlova, cupcakes, a chocolate cake.  I took along some more of the biscuits I had made - this time sandwiched together with nutella - and vegan sausage rolls.  In true birthday fashion, my mum forgot she had also made yo yo biscuits so some came home with us.  Sylvia helped decorate the cupcakes with her younger cousins. 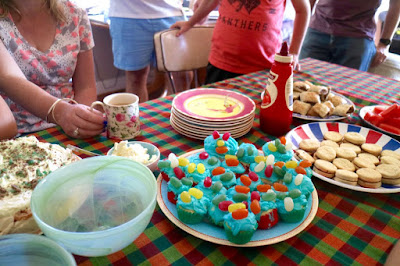 Finally:
After all that, I am glad Sylvia's birthday season is over.  It is lots of fun but quite tiring.  I am a little sad and a little relieved that these children's parties wont last forever.  It is interesting to see Sylvia having her own thoughts on decorating cupcakes and party activities.  I expect she will be organising her own parties soon.
Posted by Johanna GGG at 20:45