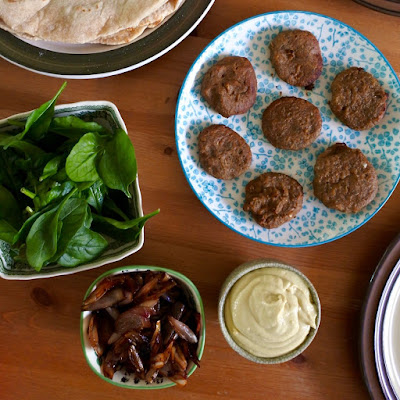 I don't often have my brother over to lunch so I was delighted that, when we were organising a recent lunch, he was keen to cook with me.  The initial idea was to make spelt wraps because Paul was after spelt recipes.  Once I know he was on board to help out, I went all out on a fancypants wrap of cashew cream cheese, lavender fried shallots, sage tempeh patties and baby spinach.  Inspired by Street Vegan.  If only every lunch time was so much fun and so delicious! 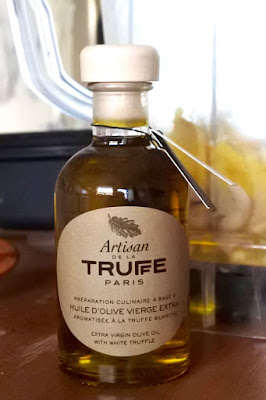 I had already tried two of the components of our meal before.  The first was the truffle cashew cheese.  I bought truffle oil from an airport when visiting Paris earlier this year.   I will never eat anything with truffle oil again without thinking of that trip.

At Orly Airport we had bought a few last purchases including the truffle oil.  Then began the queuing to get through customs.  We were told that it was ok to take liquids through customs as we stood in queue.  Someone else told us to leave the lengthy queue use the automatic passport scanner but when we got there we were told that we should have registered and Sylvia was not able to use it as she was not yet 8 years old.  Finally, when I walked through the body scanner, I saw an officer was speaking disapprovingly in French and holding up my truffle oil at the same time that Sylvia was nervous at going through the scanner after me.  Then we waited for ages in a cramped waiting area for a late plane.  Sylvia fondly remembers that she was first on that plane! 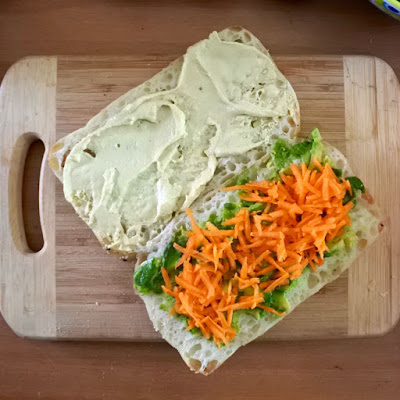 It took me ages to work out what to do with the truffle oil.  Then I found truffle cashew cheese in Adam Sobel's Street Vegan which I borrowed from Faye of Veganopoulous.  And because it wasn't quite right for me I found a similar recipe online which suited.  I loved it.  The truffle oil makes it rich but in a good way.   It was great in dips and sandwiches.  Above is a ciabatta with truffle cashew cheese, avocado and grated carrot. 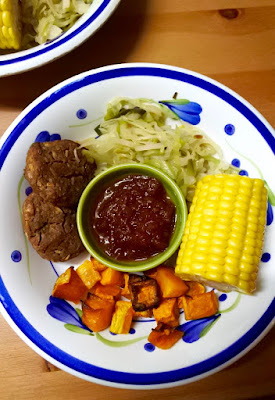 Later I made some of the Sage Tempeh Sausage Patties from Street Vegan.  I was intrigued at the idea of blending up tempeh with seasonings and baking them to make sausage patties.  It worked pretty well though I felt that the flavour of the fennel seeds were a bit intense.  We all enjoyed them.  Sylvia even ate one or two.

I also decided to stick with my regular sourdough flatbread recipe and substitute spelt for wheat flour rather than trying another online spelt flatbread recipe.  This was a good decision as I tried the latter recipe on another day and found those flatbreads to be dry and disappointing. 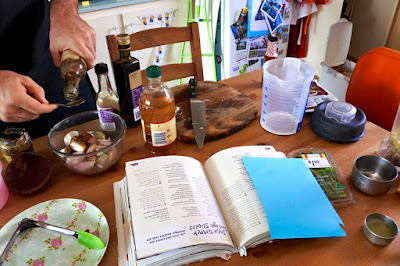 By the time that Paul arrived, though I had quite a bit of cooking to do, most of it was something I had done before.  Street Vegan is a great cookbook with lots of really interesting reflections on food truck culture and the history of the Cinnamon Snail Food Truck where a lot of the food in the book is sold.  The recipes are not for beginners but are great to make for a special occasion or when there is team cooking.

Paul is quite a fearless cook and happy to divvy up the tasks.  I started on the cashew cheese and he got the lavender shallots underway.  Then he started on the sage tempeh sausage patties while I started to fry up the flatbreads. 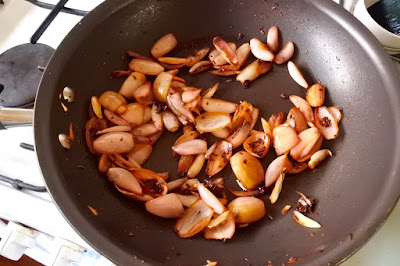 The original recipe in Street Vegan for the shallots was Lavender Roasted Shallots.  But my oven is so slow when it comes to roasting that I thought frying them might work better.  We fried them gently in the roasting marinade while we prepared other components of the meal.  I reduced the lavender and felt it was enough for me. 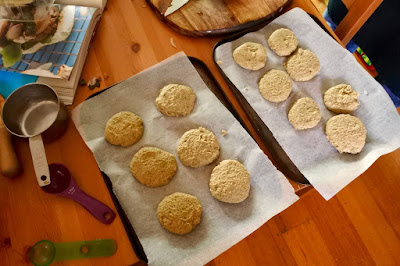 I really liked the Sage Tempeh Sausage Patties.  The ones I made with Paul had a better flavour.  The raw mixture was quite sweet but it was less noticeable once cooked.  (Hence my 2-3 tbsp maple syrup in the below recipe to remind me to start with 2 tbsp and see if it was enough next time.)  Blending seasoned tempeh is brilliant in imitating sausage meat.  However we forgot the wheatgerm when doing them with Paul and they were a bit soft as a result. 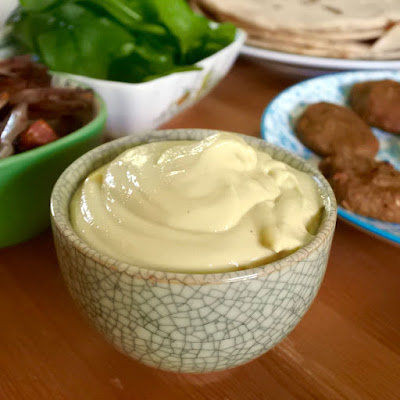 I really loved the truffle cashew cheese.  It is soft and smooth like a creamy dip.  It is a cheese for spreading rather than grating or slicing.  I was happy that there seemed to lots of this for another day.  Just the soft of vegan cheese spread I love to have in the fridge. 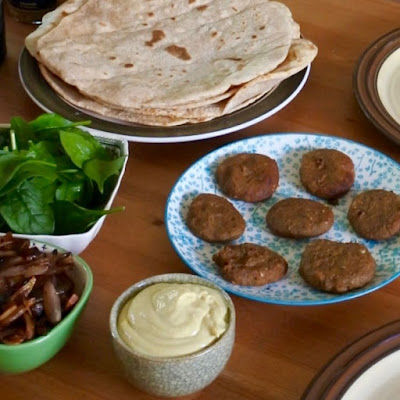 And everything tasted brilliant when wrapped in a soft spelt flatbread.  I was really pleased how the spelt flour worked in my usual recipe.  It wasn't completely spelt as there is white flour in my sourdough starter.  But it was the sort of spelt recipe that Paul had been seeking. 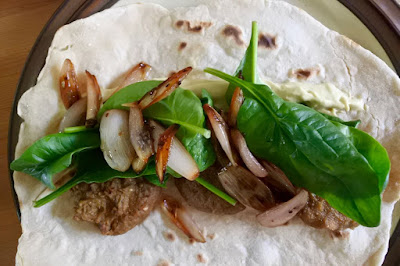 Finally everything was ready and the table set.  We sat down and stuffed our flatbreads and were well and truly satisfied with an excellent lunch.  The patties were served in sliders in the book but it was the flatbreads that I had originally planned to make.  I would love to try more dishes from Street Vegan but many dishes seem quite complex like this and most days I just don't have time.  However I am very pleased to have made an approximation of one of the amazing recipes in the book.

I am sending this to Jacqueline for Meat Free Mondays, Kimmy and Mary Ellen for Healthy Vegan Fridays and Kirsty, Mandy and Eb for Cook Blog Share.

Spread truffle cashew cheese over the middle of a flatbread, pile with sausage patties, shallots and spinach.  Roll up and devour!

Blend until smooth.  Keeps for quite a few days in fridge in sealed container.

Mix all ingredients and knead briefly until you have a smooth firm ball of dough.  Cut into four.  Roll out each portion as thin as possible (about a 0.5cm thick) on a lightly floured board .

Heat a heavy based non-stick frypan over a high heat.  Place a round of dough onto the pan.  Heat for a few minutes or until it balloons up and brown spots appear on the other side.  Flip over, flatten with an eggflip or spatula and fry another minute or two until you have some brown spots on the other side.  I tend to brush out the flour from the pan (with a kitchen towel) before frying the next one so it isn't covered in burnt flour.  Best eaten on day of frying.

Blend everything together to form a sticky but fairly thick mixture.  (We did this using a stick blender in a jug.)  Using damp hands shape small handfuls into patties..  Place on lined oven tray.  Bake for 20-30 min at 200 C until slightly browned but still quite soft.  (My own is quite slow so I did not worry but Street Vegan warned not to dry them out.)

Cover shallots with boiling water to loosen the skin then peel and slice lengthways.  (Discard soaking water.)  In a medium bowl mix lavender, mustard, vinegar, agave, liquid smoke, tamari and olive oil.  Fry in large heavy based nonstick frypan for 20-30 minutes over medium heat or until shallots soft and caramelised.

On the stereo:
Marvin the Album: Frente
Posted by Johanna GGG at 23:04