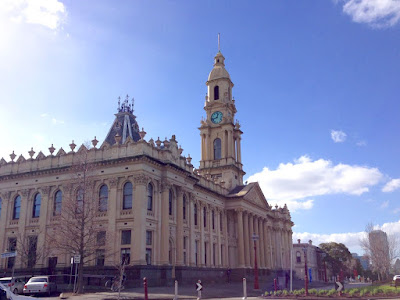 Yesterday was a lovely sunny winter day.  Perfect for strolling around buildings in South Melbourne as part of the Open House Melbourne.  The last few years we have seen quite a few building in the CBD so this year my dad, my brother, Sylvia and I went to the other side of the river to see some places far less familiar to me.

The first building, the South Melbourne Town Hall (above), was quite familiar to my dad.  Sort of.  He worked there over 40 years ago but it has been a long time since he was last there.  He remembered Hector Crawford's love of the auditorium, that the World Wat II honour roll used to be by the front door and that he once climbed the tower to see where the man put up the flag.  It is perhaps not surprising that where his office once was is now almost unrecognisable. 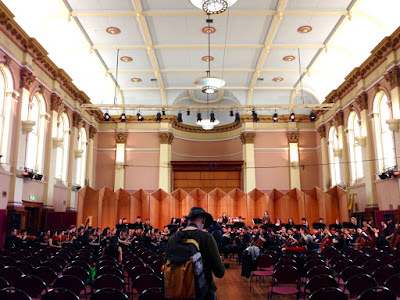 Since local government amalgamations, the use of the 1880 heritage-listed building has changed considerably.  It is now home to the Australian National Academy of Music and this was quite present in posters and grand pianos as we walked through the open rooms.  Our first port of call was the auditorium where a medical students orchestra was rehearsing.  It was lovely to sit and listen to the lull and swell of the music.  No doubt this grand room has seen many balls and performers in its time. 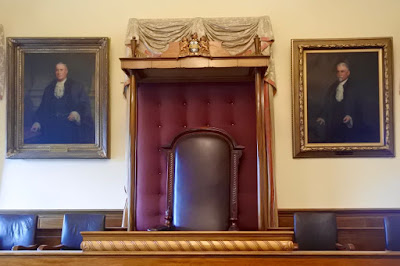 The building retains the grandeur of wooden panelled corridors and a Council Chamber with an impressive Mayor's chair.  It is no longer used but is fun to sit there and give some orders. Around the room were photos of former Mayor's. 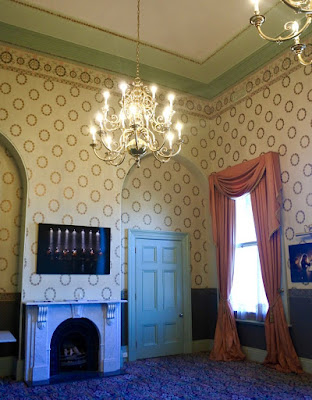 This room housed a grand piano and a harpsichord.  I think it might have been called the Mayor's room.  The self guided tour didn't have much information once we passed the information officer at the front telling us which rooms we were visiting.  I would have liked more information but resources must be thin on the ground with all the buildings offered at Open House weekend.. 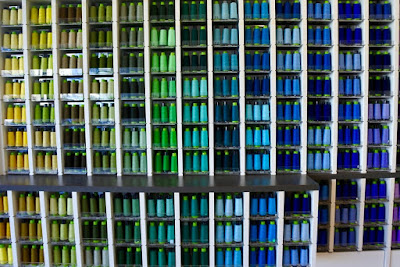 When we arrived at our next building, The Australian Tapestry Workshop, I meant to take a photo of the wonderful bright and beautiful main room with the light coming in from the windows on the heritage saw tooth ceiling.  (The building was formerly a drapers and then a knitting mill.)  However I got distracted by all the brightly coloured wools, the kids activities and some familiar faces. 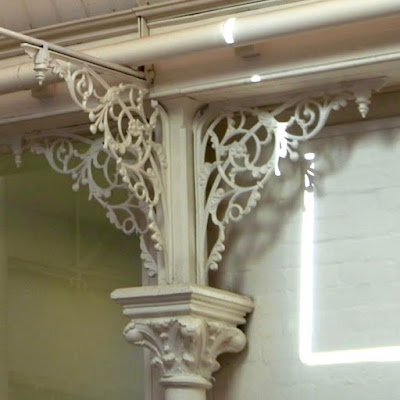 I do have a photo of the intricate metal lacework on this supporting post. 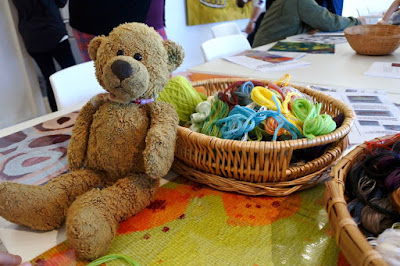 And here are the lovely assortment of colourful threads available for kids to have a go at weaving on a simple cardboard loom.  Sylvia really enjoyed this activity. 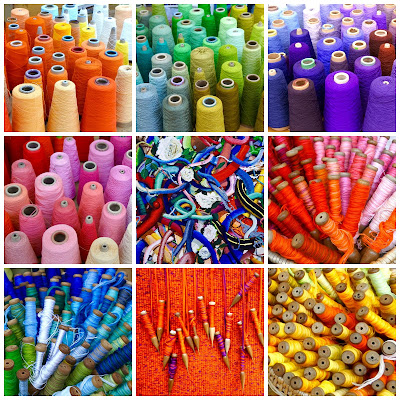 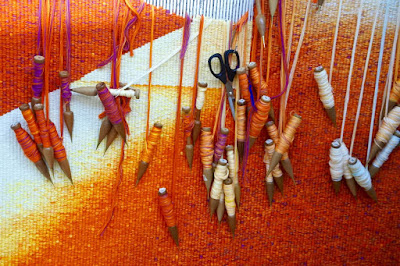 It was fascinating to see the many spools that were used to making intricate patterns in the weaving.  The weaver was working on this huge work-in-progress. 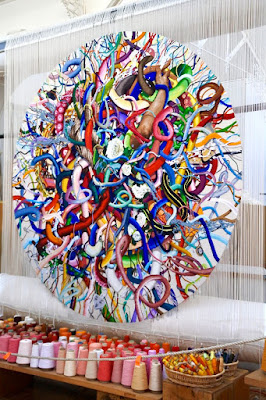 I love the tangle of colours in this tapestry.  You can see that it is huge if you look at the wool below for perspecctive.

We also thought about doing a tour but wanted to move onwards.  I met an acquaintance who was surprised we were headed to lunch at 2.30pm.  That's how we roll sometimes when visiting buildings.  So we headed to the Clarendon Street Grill'd for a burger and chips.  Then we walked past South Melbourne Markets and I wished we had time to stop. 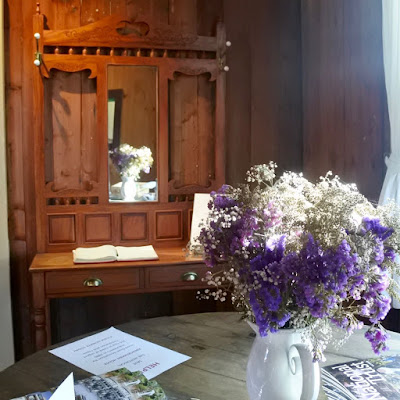 Our final buildings were the Portable Iron Houses in Coventry Street.  These 19th Century corrugated iron houses were budget flat pack houses brought from catalogues in colonial times and shipped to Australia from the UK.  These days they are managed by the National Trust. 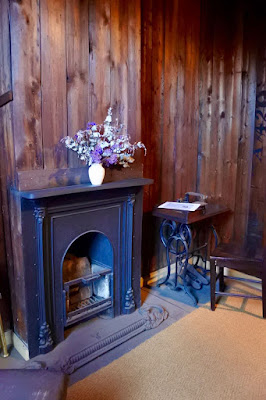 We arrived just in time to see the rooms before the houses were closed for the day.  The buildings were rescued and restored by the National Trust, so there is not much furniture but it is quite interesting to see what could be made from flatpack. 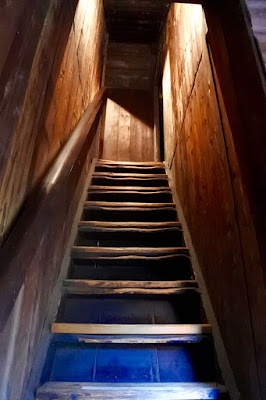 The upstairs was closed, according to the sign, due to the volume of traffic as the houses are fragile.  They are open by the National Trust on the first Sunday of each month and I meant to ask if the upstairs are open to the public then. 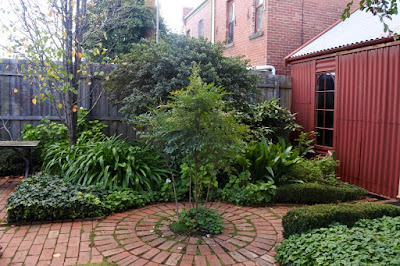 The original house on the site is entered from the street as though it is just a regular house but out the back beyond a well kept garden are two other iron houses which have been rescued from other sites.  I was quite shocked at the disrepair of the Abercrombie House (below).  The National Trust are seeking funds to restore it.  I'd love to see it repaired but I also think it shows quite a lot about the restoration process to see a house in the condition that it was in when the Trust acquired it. 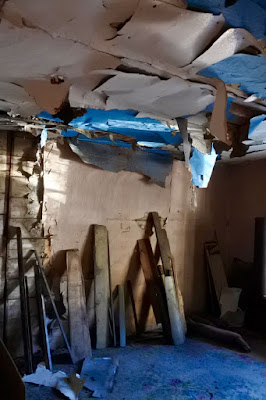 Then it was time to head home.  I was tired by the time I got home and defrosted what I thought was tomato pasta sauce.  It was gravy.  I had some ravioli with a quick sauce of a spoonful each of gravy, tomato paste and hummus.  It wasn't bad for home made fast food.  Then we mixed the passionfruit from the South Melbourne Market with apple and strawberry to make a simple fruit salad. 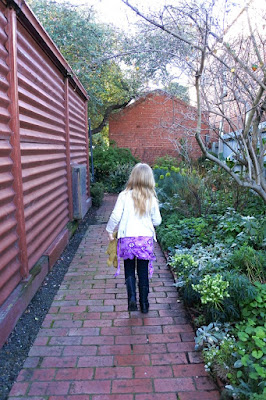 So that is Open House Melbourne over for another year.  I love looking in the buildings but it is so overwhelming to choose buildings.  It was sad that this year the pre-booked tours cost $5 per person which is against the open nature of the weekend.  Apparently this is because lots of tours had no-shows.  I guess quite a few people over-estimate what they can do.  Then there are those like me who don't have final numbers until on the day and don't get organised to book tours ahead.  Maybe next year I will get myself organised.  Fortunately there is a lot to see without pre-booking!

To see more of the buildings I have visited in previous years, look up Open House Melbourne in my Reviews and Reflections page.
Posted by Johanna GGG at 22:44