Thanks to everyone who has left such kind comments on the birth of Sylvia. I have been trying to catch up on your posts in my blog reader but due to limited time I apologise that I haven’t been able to make comments.

There is still very little cooking going on here but I do have a few recipes to post. However, before that, I wanted to share a rant and some thanks. 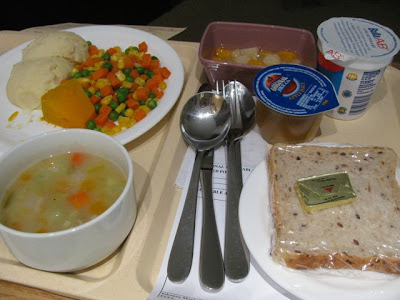 The rant is about hospital food. We went through the public health system and had some excellent service and some not-so-good service but the food has to be one of the low points. I have had an insatiable hunger since the birth – probably the fact I don’t have a baby squashed against my stomach as well as the energy required for labour and feeding. So I was horrified at how bad the food during my stay in the hospital was.

I took the above photo of a meal I was served because it appalled me so much. The frozen peas, corn and carrot were described on the menu as ‘seasonal vegetable’ which made me laugh. As you can see, despite what is recommended as healthy eating for breastfeeding mothers, the hospital meals were devoid of much in the way of protein, iron, calcium, or fresh fruit and vegetables.

Vegetarians were poorly catered for. When I complained about the food in talking to the nurses, they found I wasn’t getting the vegetarian meal. When this was finally changed, the veg option wasn’t much healthier. I don’t imagine that carnivores fared much better - the meat meal I was given on one occasion looked like grey sludge.

Maybe this is all about cost-cutting but baked beans on toast has far more nutrients than these meals and is dirt cheap. Surely people in hospital need good food to build up their strength rather than a starvation diet. (update - for more on hospital food check out Notes from a Hospital Bed.) 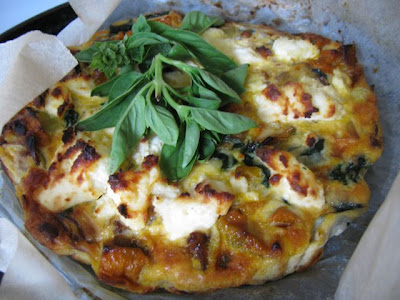 On a more positive note, I have been very lucky to have a mother who appreciates good food. (OK, no coincidence there!) She brought me food in hospital and has been cooking up an impressive array of dishes for me to have at home - pumpkin quiche (pictured), lentil, mushroom and fetta salad, dahl, stuffed eggplants, and the wonderful Leek and Aubergine Tart Tatin which was recently featured on the Cook and the Chef on the telly. She has also visited with loaves of good sourdough, home made cakes and very helpful advice. There is probably more that I have forgotten too because the past few weeks are a bit of a blur. Thanks mum!
Posted by Johanna GGG at 20:24