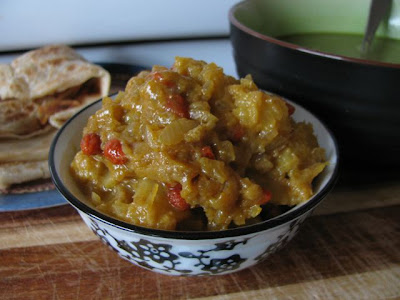 My copy of Vegetarian Times (VT) appeared in the mail recently. Usually I look at the recipes and plan what I will make but quickly forget my good intentions. This month had a section on banana with a Banana and Pineapple Chutney – I had plenty of pineapple and banana from my fruit bowl and finally followed through with my VT plans because it seemed a good way of using (preserving) the fruit.

This chutney is easy to make. I made mine in about 30 minutes while I waited for my Hummingbird Cake to bake. I was also happy with it because it was a small quantity (I halved the VT 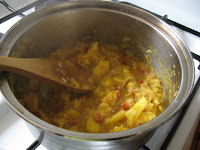 recipe) and only kept a week so I didn’t need to bother with sterilising jars. I made some small adjustments to the flavours and substituted goji berries for sultanas. I used them because E has been having them on his cereal and they seemed suitably exotic and colourful for this chutney but in future I would only use half the amount called for in the recipe.

However it is a very sweet chutney – moreso than other chutneys I have made. The banana takes a backseat to the pineapple. At first I thought it tasted quite like sweet and sour sauce because the pineapple and vinegar flavours were so predominant but once I let it cool and the other flavours develop it had far more complexity to it. When served with pasties, E though it too sweet but he enjoyed it with burgers. My mum and I enjoyed it with some spinach and fetta pide triangles. And of course it is excellent with curry or dahl. All in all, it is a fine way to use up fresh pineapple and get more fruit in your diet.

I am sending this to Andrew at Spitoon Extra who is hosting this month’s Waiter There’s Something in My … with Pineapple being the theme.

Heat oil in medium saucepan and fry onion til soft and translucent. Add spices and stir one minute. Add remaining ingredients and bring to the boil. Reduce heat to medium and simmer about 10 minutes til fruit soft, stirring frequently. Cool and store up to 1 week in airtight container.

On the Stereo
Spirits’ Nest – Various Artists
Posted by Johanna GGG at 22:42