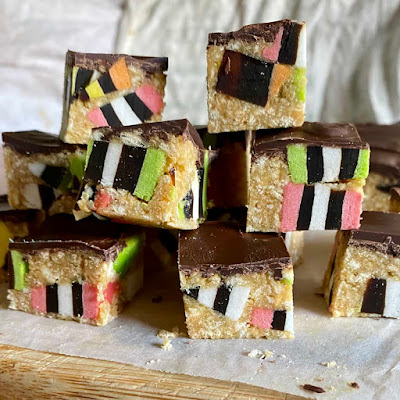 Everyone I talk to in Melbourne had a really hard time of our recent 2 weeks of lockdown.  It just gets harder and harder to wind back the lifestyle that we gave up so much for last year.  Before lockdown, we had had almost 3 months without a community transmitted case of Covid and felt almost carefree.  Not quite.  But it felt good.  Today I bring you a post from the time before our most recent lockdown when we were more hopeful and free.  It was a weekend where we could go out of town, visit cafes and bake for morning tea at work. 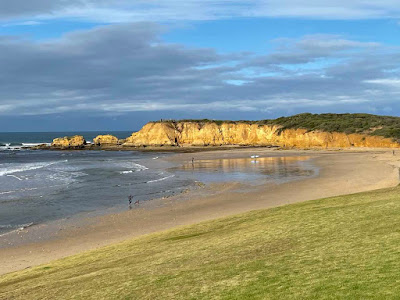 On the weekend in question I went down to Geelong to stay with my parents.  My brother was visiting from Kangaroo Island.  He loves swimming as much as I do so we went to Torquay Beach for a swim.  For anyone who thinks Australians swim in the sea all year round, it is as likely for most people in the Southern states as our government opening our international borders by the end of the year.  And that aint going to happen!

The water at Torquay was freezing.  I don't usually swim in late autumn.  But we had a quick dip, then I regretted not going under a wave and getting my hair wet so we went back in so I could go under.  By the time we came out my feet were like ice blocks and the hot shower back at my parents was very welcome. 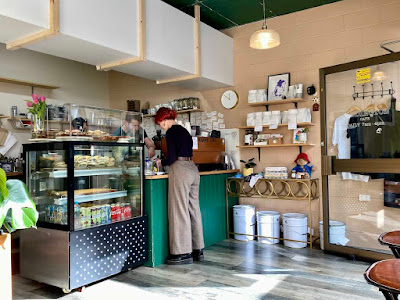 Once we were warmed up, we went with my parents to Paddington Cafe in Belmont.  It is a cute little cafe in a laneway that feels like a slice of the city in an unexpected place.  I had worked up an appetite and ordered the Vegan Sandwich: the smashed garlic and peas, tomato, hummus, mustard, cucumber and spinach came in a toasted foccaccia with some crisps on the side.  It was very nice though I found the mustard flavour a bit intense for me as it isn't my favourite flavour. 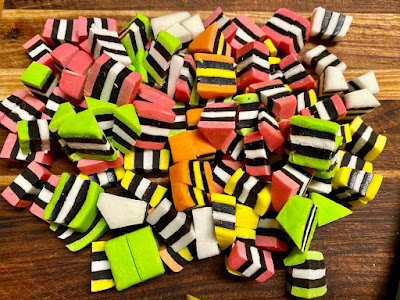 I came home in time to go grocery shopping and bake with Sylvia in the evening.  We were on a mission to make two no-bake slices for a rainbow morning tea.  So they had to be colourful.  The first slice was a licorice slice with stripey licorice allsorts in a condensed milk and Marie biscuits slice, covered in chocolate.  A classic Aussie slice. 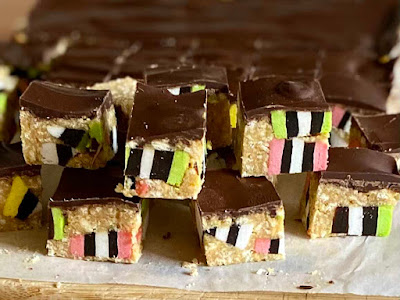 I had had this slice before when my sister in law (the slice queen) had made it for a family dinner.  Even so, I was surprised how much I liked it. The soft sweet biscuit filling and the chewy licorice contrast nicely and pair beautifully with the chocolate topping. 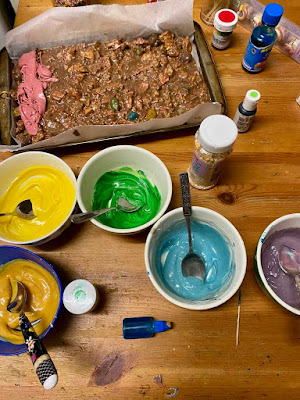 Sylvia made the second slice.  It was a hedgehog with a rainbow topping that was inspired by a Tik Tok video.  She added some colourful add-ins but the vivid topping was the most impressive.  And the topping created the most dishes!  Little bowls of all the colours of the rainbow. 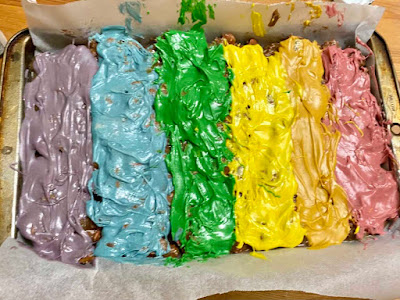 The slice looked great when it was just the strips of coloured chocolate.  Sylvia put on a lot of sprinkles (and I took a few off).  It actually looked so beautiful once the sprinkles were on and she added some little rainbows.  I was very proud of this slice at our rainbow morning tea. 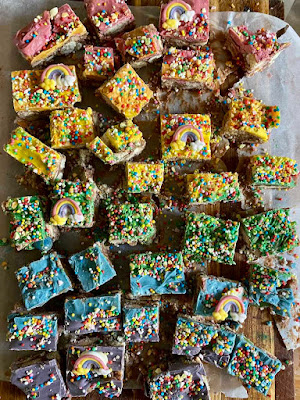 One of my colleagues had organised a rainbow morning team for IDAHOBIT day (International Day against Homophobia, Biphobia and Transphobia).  It was really nice to have a morning tea with lots of people bringing food and a sense of occasion.  We had vegetarian sausage rolls, chocolate cake, peanut butter layer cake and smarties choc chip cookies.  Some of my colleagues wore colourful clothes.  It was surprising and disappointing soon after to see the headlines about Peter Dutton MP telling the Ministry for Defence that staff were "banned from wearing rainbow clothes because it's too 'woke'".  It was great to have a bit of fun and to celebrate diversity. 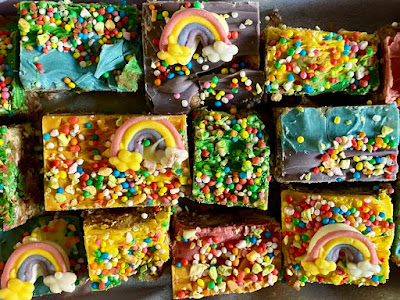 So here are a few links that make me more hopeful about change in our world:

Make a hedgehog with condensed milk.  Instead of Marie Biscuits, use a packet of 100s and 1000s biscuits.  Also add in some fun lollies such as jelly beans and maltesers (or whatever takes your fancy).  If too much liquid, add some more coconut.  Spread into a slice tin.  Melt a packet of white chocolate melts and divide into small bowls.  Colour them purple, blue, green, yellow, orange, red with food dye.  Spread each colour in that order across the slice tin and then top with sprinkles, sparingly.  Set and cut into small squares.

Melt butter, condensed milk, golden syrup and treacle (I did this in the microwave).  Mix in biscuits and coconut and licorice allsorts.  Tip into a lined slice tin (18 x 28 cm) and use the back of a spoon to spread and flatten evenly.  Set in the fridge for an hour or two.  Melt chocolate and spread evenly over the slice.  Return to the fridge to set.  (I did this overnight.)  Cut into small squares and share.

On the stereo:
Havilah: The Drones