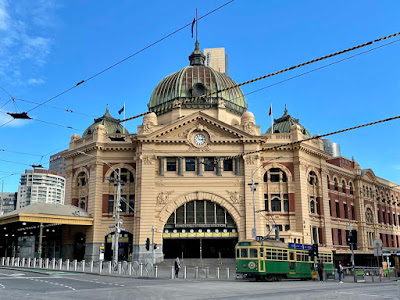 In Melbourne we are easing out of lockdown 4.0.  It was only 2 weeks of absolute lockdown of offices, schools, and non-essential retail with only 5 reasons to leave the home and 2 hours exercise a day.  However while it seemed long compared to other lockdowns, it was billed as a circuit breaker lockdown which made it feel longer, especially after our lockdown 3.0 was only 5 days.  Personally, I found it harder going into it with a sick cat and lack of sleep.

As well as feeling isolated, it is unsettling to feel again the uncertainty in our freedoms, just as I was starting to spend more time with family and friends and find some routine.  Obviously I had too much confidence in our Covid normal life that I had a lunch organised, tickets to the Rising Festival and a 2 day workshop within a week.  All got cancelled. I missed the swimming pool, the office and Sylvia learning in the the classroom.  Luckily I have had sourdough, walks with friends, bike rides and the cat is much better.  While we are in a better position, we are back to mask wearing, I am still unclear about when I will be back in the office and when I had an outdoor swim yesterday the change rooms were closed.

Above is a photo of the Flinders Street Station in the middle of the city.  I had a long ride to the city a week ago when they sweetened the second week of locdown by increasing the distance we could travel from home from 5 to 10 km.  I was surprised to see it so deserted on the weekend, expecting others to be attracted there like me.  Usually Flinders Street Station is bustling with people coming to town on trains, meeting others and just hanging out.  Let's have a look at some other sights and signs in our lockdown. 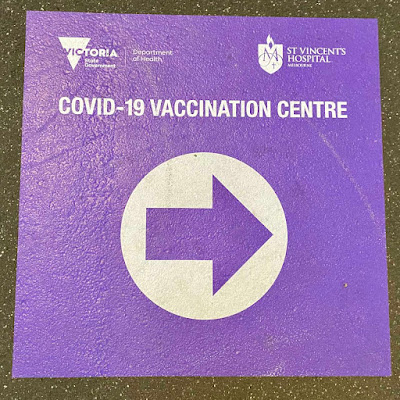 One of the differences between this lockdown and previous ones is that the community had access to a vaccine and recognised how important it was to keeping us safe and out of lockdown.  Queues at vaccination hubs were as common as queues at testing sights.  Quite a few people I knew were frustrated trying to book vaccinations as they were opened up to younger people.  I had my first vaccination just before it got really busy. 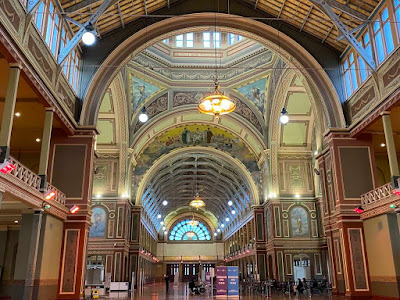 I went to the Melbourne Exhibition Building, because I chose to go where I could look up in awe at the architecture rather than think about a needle digging into my flesh.  (Anyone else feel queasy about all the footage in the media of people having a needle pushed into them?)  Sitting there for 15 minutes after my jab was just lovely and I could have sat there all day if I had not been told it was time to go. 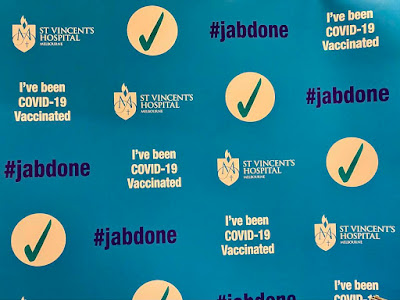 I loved the media wall I passed on the way out.  I guess that is for the "vaxxie", a new term I just learnt for the vaccine selfie.  Then I went outside and ended up chatting to a woman who wanted to have the vaccine but was unsure about it.  The covid vaccine culture is fascinating.  As has been noted in the media a few times recently, when we get other vaccines we usually don't know the brand or the risks but believe they are going to be a good thing.  Yet there have been such lengthy discussions about brands and risk that I think we all have information overload. 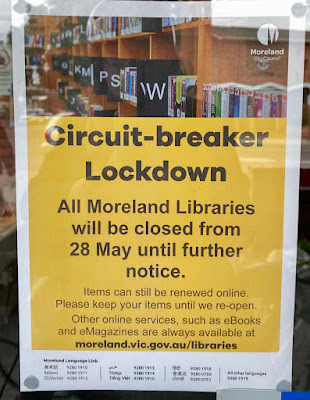 Another new term was the "circuit breaker" which as not only in the politicians speak but also in the notices.  It was to be a short sharp week but was extended to 2 weeks and now we are at the end of week 3 with quite a few restrictions still in place.  As you can see in the above sign, there was uncertainty about exactly when the libraries would open again. 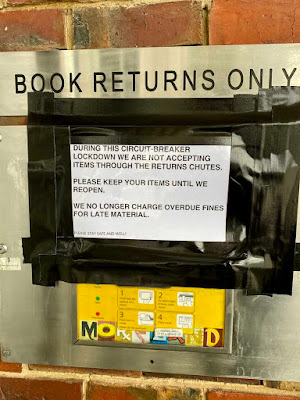 Not only was our library closed but the return chutes were taped closed.  I might have been unobservant during other lockdowns but I do not remember seeing this.  Perhaps books were returned in the wrong way during previous lockdowns? 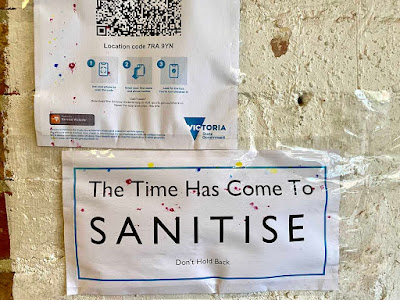 I liked this sign: "the time has come to sanitise".  I think this will make a great song when they make Covid: The Musical! 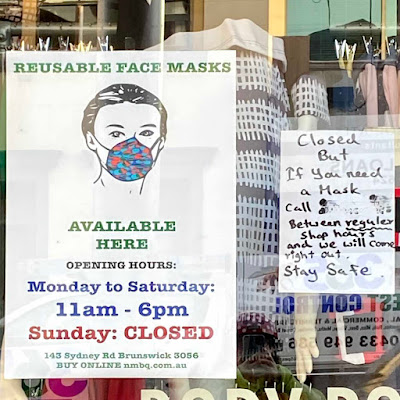 Before this lockdown, we were only wearing masks on public transport and in taxis.  Suddenly yet again we were wearing masks indoors and outdoors.  I had to find all my masks that were stashed in different bags and get back into regular washing.  I liked the signs on this shop that no only said they were selling reusable but gave mobile phone numbers for those who had a reusable mask emergency need outside shop hours.  (I blanked out the mobile numbers as it did not seem right to share them online.) 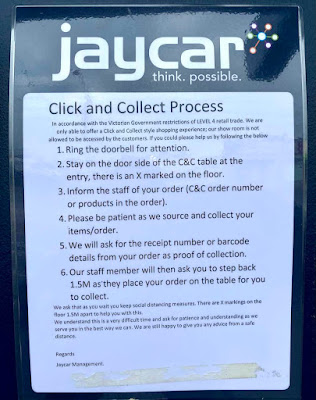 The lockdowns hit businesses hard.  Even if they could stay open, many had lots of challenges.  I took a photo of this random shop's click and collect process.  I guess after a few lockdowns, Jaycar has perfected the process but I can't imagine the staff were looking forward to making sure people practiced patience as they stood on the X and stepped back 1.5m when the order was placed on the table. 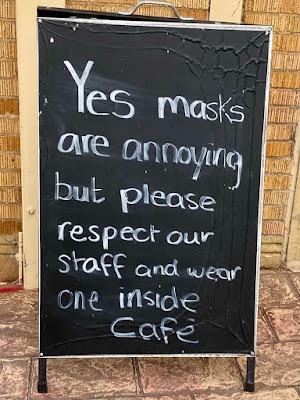 This cafe seems to have had problems enforcing the orders to wear masks inside.  To be clear, they would have been allowed to eat and drink inside.  They were only there for a takeaway so there was no excuse ot to wear a mask.  But it was quite common to see people without masks walking outside holding a takeaway coffee, as if to say I can't wear a mask because I am about to sip my coffee any moment.  Sometimes it was genuine and sometimes it seemed less so. 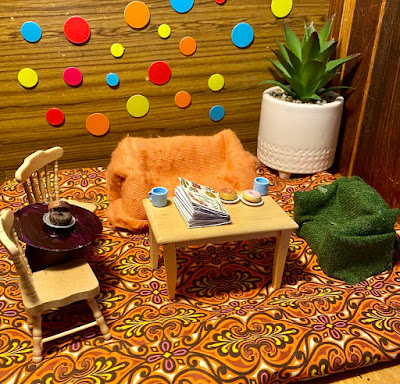 Lockdown meant a return to remote schooling and more than enough screen time.  These two aspects met in one of Sylvia's school projects where she was asked to make a tv or film set in art.  We had been bingewatching Friends so she set up a set for the Central Perk cafe.  We looked into purchasing orange felt by click and collect for the sofa but couldn't see any nearby.  So Sylvia settled for cutting up an microcloth duster.  I am glad that duster finally saw some action!  I am less glad it was glued onto dolls house 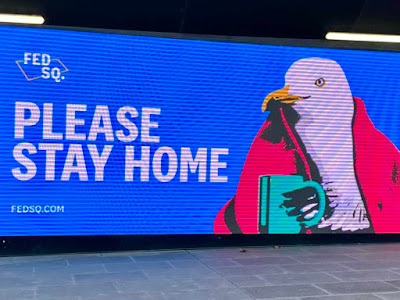 I took a few more photos during my bike ride to the city.  These signs at Federation Square made me feel guilty for being out and about.  But I also know that bike riding has kept my spirits up so I didn't feel too bad.  Also those seagulls at Fed Square are really annoying so although they were cute on the photos, I liked the idea of them stuck at home rather than stealing food. 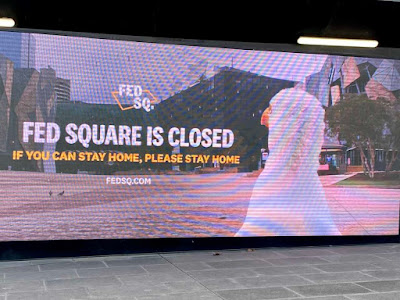 What a poignant picture of a lone seagull in a closed Fed Square!  Except, if I know anything about those seagulls, where there is one there is a flock. 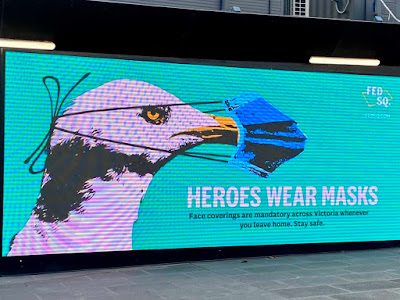 And the final Fed Square sign shows a seagull putting a mask on so badly that he makes Greg Hunt looks like he is an expert at putting on masks.  Poor Greg Hunt will not live down his botched demonstration of how you put on a mask last year!  I did tell you that I don't trust these Fed Square seagulls.  They will not live down taking a sushi hand roll out of my hand a few years back in the good old days when we could gather in groups in Fed Square. 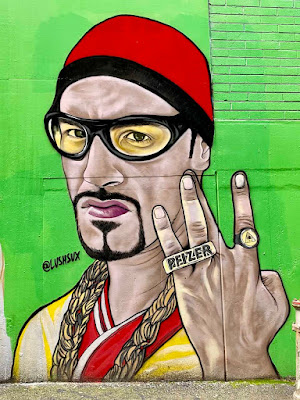 During my ride to the city, I enjoyed having a look around at the street art (I think there might be a post coming up if I can find the time).  Though I must say it was so quiet as to feel a little creepy walking around deserted laneways.  All a bit On the Beach.  There was a picture of Ali G wearing a Pfizer ring.  I was curious to know if this is just fun vax-bling or if there is a story behind it. 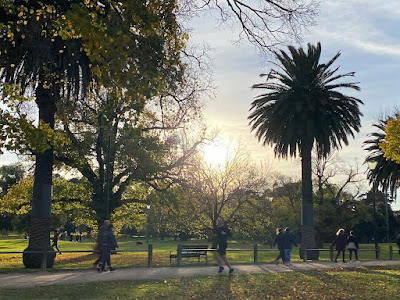 Finally on my way home from the city, I passed Princes Park in Carlton.  It is such a beautiful park and was a lovely sunny day that it was understandable so many people wanting to get out of their house and stroll around the walking track.  Yet it did seem interesting how deserted the city was and how busy the park was.  Lockdown is a frustrating but also a fascinating beast!