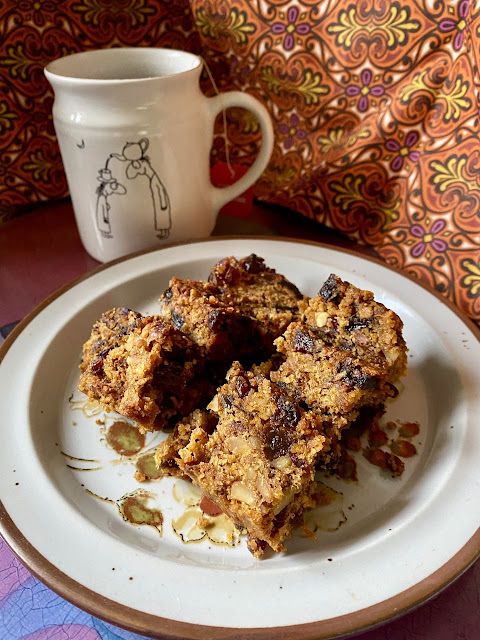 Our Christmas always has fruit cake.  Usually my mum makes it.  Occasionally I dabble in making the fruit cake for a treat.  This year I baked a fruit cake for Christmas in July.  I had bookmarked it a while back because it fascinated me that it had condensed milk and cornflakes. 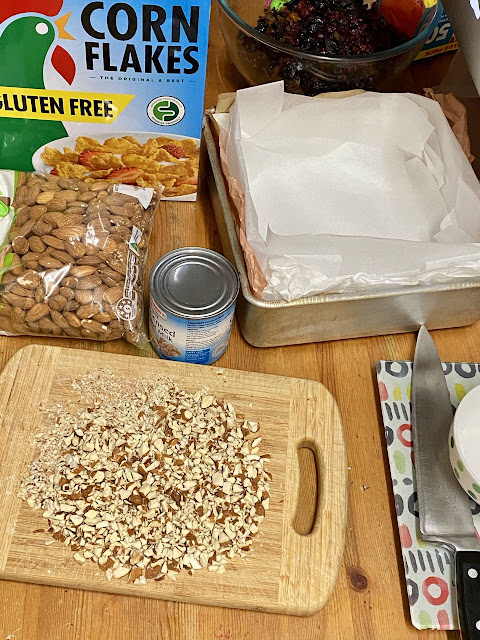 I decided to make it gluten free for one of my friends.  Kellogs makes gluten free corn flakes now and they are pretty good.  That was one of the easiest parts of the recipe.  I could not believe there was no regular condensed milk on the supermarket shelf!  I know that we were back in lockdown at the time and Woolworths was having problems with the distribution centre but since when is there a run on condensed milk.  All I could find was coconut condensed milk.
By the way I was surprised on the recipe page claimed that condensed milk is "rarely used in Britain because of its post-war poverty connotations ".  Actually I think we are beyond that sort of post war cringe and condensed milk can been seen as one of the great things to come out of war, like women at work and the NHS.  When I see condensed milk in a recipe I want to try it, and it seems if you can't buy it in a supermarket that I am not the only person to feel that way. 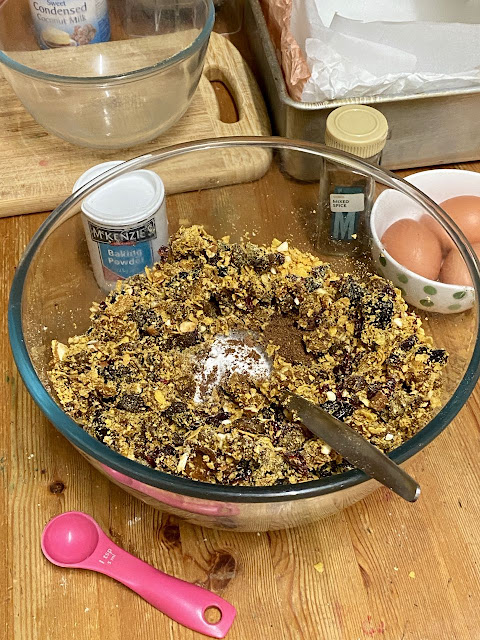 Instead of using pre-made fruit mince, I made a batch of the fruit mince I make each Christmas.  Yes, it took more time (even with saving me time looking in the stores in July) but it is such a great way of using up bits and pieces around the kitchen.   And as I make it each year I am pretty familiar with it.  I have written it into the recipe below but I have also noted that you could just buy fruit mince and a packet of dried fruit, if you don't have the time or ingredients. 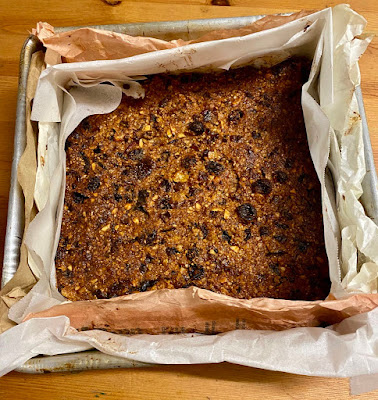 The recipe I was using directed to use a round cake tin.  Having learned about making fruit cake in home economics at high school, I searched for some old paper bags to line the cake tin and used a square one which is much easier to line.  This helps to make the outside stay moist because fruit cakes take a while to bake.  It makes it harder to get a really neat square. 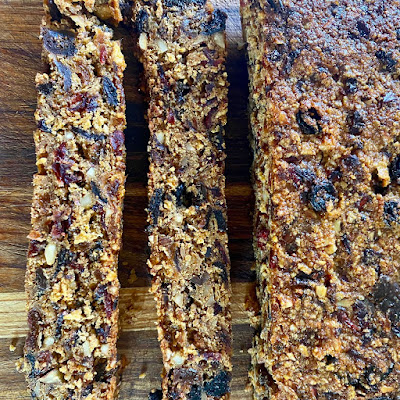 I chose to make the cake for Christmas in July this year because we were in lockdown and I needed food I could transport easily on my bike.  I made it the week before our dinner because I knew it would take longer and keep longer.  I gave quite a lot to my friends and kept a lot for me.  It lasted about 6 weeks.  Christmas cake goes a long way. 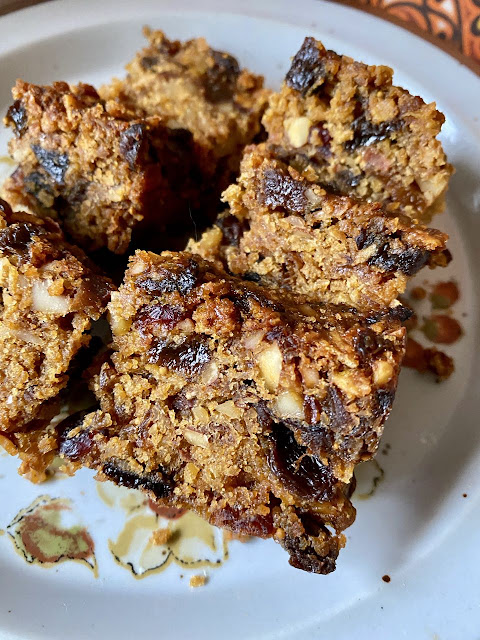 It was a nice cake.  Not amazing.  It was a little nubbly.  I wonder if it was because I didn't crush the cornflakes to a powder but left some texture in them.  The other thing that might have made a difference was that the condensed milk I used was a vegan coconut condensed milk.  The tin was only 320g compared to 400g in the regular condensed milk tins.  (Which I assume is what is meant by a "large tin of condensed milk".)  But you don't say no to a cake that is crammed with dried fruit and very pleasant with a cuppa.  It has been great to have it on hand during lockdown.
More fruit cakes on Green Gourmet Giraffe:
Apple fruit cake (v)
Chocolate fruitcake
Fruitcake with chocolate chunks
GF Apricot and Cranberry Cake (gf)
Irish tea cake
Panforte
Christmas cake
Adapted from Aiden Brookes Trainee Chef and Green Gourmet Giraffe
Fruit mince:
250g dried fruit (I used chopped prunes, dried peaches and sultanas)
125g dried figs , chopped
1/4 tsp each ground ginger, mixed spice, grated nutmeg
3 tbsp whisky
Zest of half a mandarin
Juice of 1 mandarin,
2 tbsp orange juice
3-5 tbsp water
1/2 banana
Cake:
520g fruit mince (see above or use your fruit mince of choice)
280g mixed dried fruit (I used sultanas, dried cranberries and chopped prunes)
100g mixed chopped nuts (I used almonds)
200g crushed gluten free cornflakes
3 eggs, lightly beaten
400g tin condensed milk
1 tsp mixed spice*
1 tsp baking powder
To make fruit mince: place all ingredients except banana into a large saucepan and stir over a low to medium heat for 5-10 minutes until the mixture is heated through and melding together. The amount of water will depend on if any of your dried fruit is quite dry like my peaches.)  Stand for 1-2 hours to cool and then stir in banana.  I weighed my fruit mince after completion and it was 520g.
To make the cake: Line a 22cm square cake tin with a few layers of old paper bags and then a layer of baking paper.  Preheat oven to 150 C.  Mix all ingredients until combined and scrape into the prepared cake tin.  Bake for 2 hours or until a skewer comes out clean when inserted in the middle.  Cool for at least 10 minutes (I cooled mine in the tin) and turn out.  Wrap in foil and a tea towel until cake is needed.  Mine was fine for about 2 months.
NOTES: Adrian Brookes called for 400g fruit mince and 400g dried fruit.  You can alter this depending on how much of each you have, so long as it adds up to 800g. I have noted here the dried fruit and nuts I used but you can use whatever pleases you or just hunt around the kitchen and see what you have.  I used vegan coconut condensed milk because it was all I could find - but either dairy or non dairy condensed milk would work.
On the Stereo:
1989: Taylor Swift
Posted by Johanna GGG at 23:17