Plum and rhubarb jam, a fete and a birthday 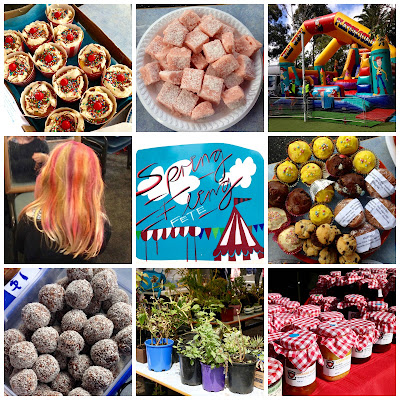 This weekend's weather was not kind with wintery temperatures and far far too much rain but it takes far more than that to keep me from the school fete and my sister's birthday party.  I had volunteered to make jam and used what fruit was given to me to make a couple batches. 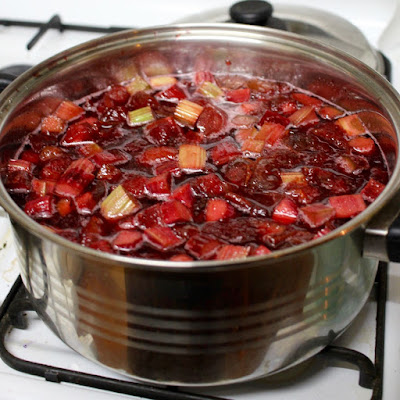 When I began this blog, I had very little experience of jam making but now I am far more confident about working out how much sugar, when it is done and how to sterilise the jars.  Even so I was a little freaked out when I took a large bag of frozen plums and found how soft they were when they thawed.  I had to use them then and there!  Well, almost.  I actually chopped them as soon as they thawed, put them in the saucepan with sugar and then too another 24 hours to find time to make the jam.  By then I had been given some rhubarb that I threw in the pot with some extra sugar.

I had planned to get to the jam making earlier but I was busy getting my Christmas parcels in the post to Ireland and Scotland.  It was a rude shock to find that Australia Post is only doing seamail for parcels over 2kg and if you dare to attempt it they had a long form to fill out.  Apparently people don't send enough parcels seamail these days.  Hurrumph!  I still love seamail to keep the cost of Christmas parcels down.  Am I the only one?  I guess not many people make jam these days either. 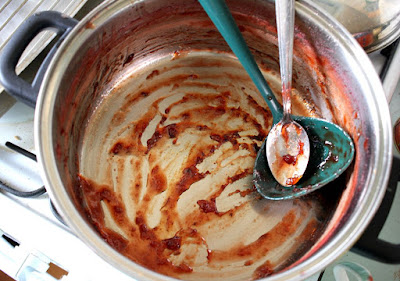 So after posting parcels, doing body balance, making dinner, finding jars in the back of the cupboard , going to my singing group, and fitting in some work hours too, it was evening when I finally made the jam.  Far too late.  Even later than I meant as I had run out of lemons and had to buy some before I started.

I used a bit more sugar that I usually do as I wanted to make sure the jam kept well.  I had added some water and left this in the recipe below but I do wonder if it was really needed as there was so much juice that seeped out of the thawed plums and I was waiting for ages past when I wanted to sleep for the jam to reach the right consistency.  I would have loved to taste the jam but not enough to eat a whole jar so I contented myself with eating some of the scrapings from the pot. 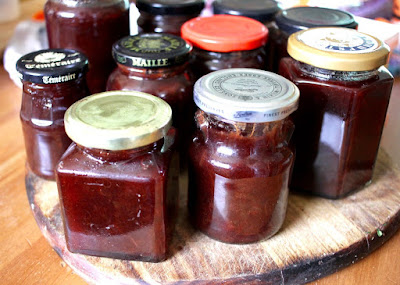 Once the jam was made it sat in the kitchen for almost a week until I got labels printed off.  Far more professional than my usually hand writing!  Before putting them on I dunked the jars in a bowl of hot water to wash off the jam spilled down the sides.

Finally I was given some gingham and rubber bands to top the jars.  Again it really looked quite smart.  I also took along some strawberry and rhubarb jam.  Towards the end of the fete I checked the jam stall and was pleased to find none of my jars left. 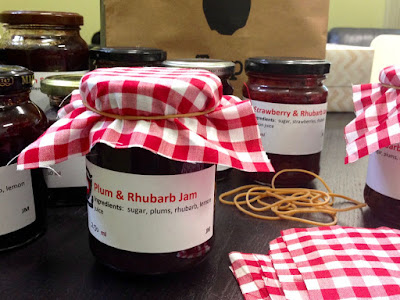 The reason the fete was held on the weekend was that we had local council elections and our school is a voting booth.  Incidentally apparently very few of the councils across the state chose to have voting booths.  So you came into the fete through a barrage of how to vote leafleteers and in the middle of the fete was a long queue of voters. 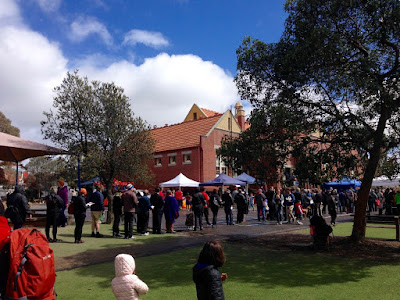 When I arrived it was sunny and I was hopeful that the weather forecasters got it wrong.  Sadly, it did not take long to find that 90% chance of rain really does mean it will rain.  By the time I had voted, the weather was on the turn.  And my voting didn't take long at 9.30am.  But in my rush to leave the house, we had forgotten Sylvia's rides wristband.  A friend was heading home to get the car because the rain was so bad.  I drove her home and got the wristband while Sylvia stayed with a friend. 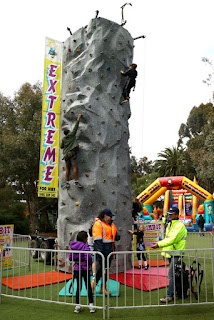 Sylvia was very excited about the rides.  Buying a rides pass was good value and let her walk into whatever rides she wanted.  Actually "rides" is misleading.  On offer were a chair swing, a bouncy castle and a rock climbing tower.  (The cup and saucer ride did not work as it was waterlogged.)  I was pretty impressed that Sylvia got herself into a harness and climbed up this tower. 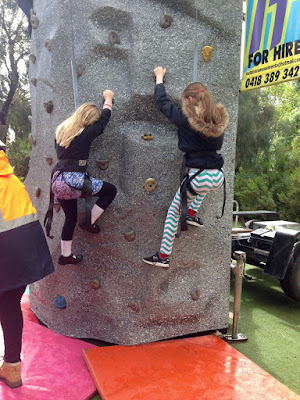 It was a great shame that the bad weather meant that the rides were only available in bursts of sunshine.  It gave kids less opportunity and the school less fundraising.  Yet the kids did seem to enjoy it when they were able to get on the rides.  Though Sylvia did once hop on the chair swing as the sky became grey and halfway through her ride it started raining. 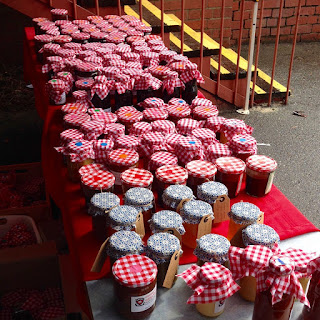 We also enjoyed walking around the stalls.  I made a few purchases at the jam stall.  After putting out quite a few books for the second hand bookstall, I was pleased to walk away with only one book (a Clementine Rose novel for Sylvia).  We went to the toy stall where Sylvia insisted on buying a soft panda toy (giving me visions of Peppa Pig at the funfair) who is her latest best friend.  I got some dodgy out of date eye serum in an adult lucky dip (do people use eye serum?).  Due to the weather, a lot of kids activities like hair spray, face paint, tattoos and craft were moved indoors.  It didn't take long for the books to follow. 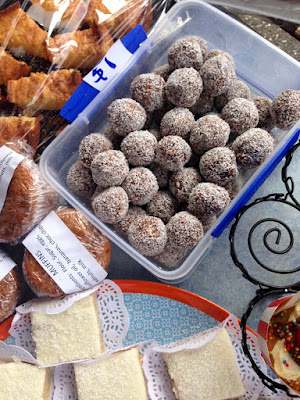 I had a vegie burger from the sausage sizzle but Sylvia would not eat them.  There was also a coffee stand and a cake stall.  I was rostered on for the plant stall but there seemed lots of people helping out there already so I offered my services to the cake stall.  I spent almost two hours of constantly telling people cake prices and taking their money.  My contribution to the cake stall was the grubs (truffles) above.  They sold rather quickly.  Yay!

I was really impressed with someone who bought lots of op shop plates and arranged bakes on them and wrapped each plate of cakes in cellophane.  They looked really attractive and would make great gifts.  In fact I might steal the idea for Christmas presents.  And the cellophane was good when gusts of rain blew over the cake stall.  It was no fun mopping water off a few plates of cakes. 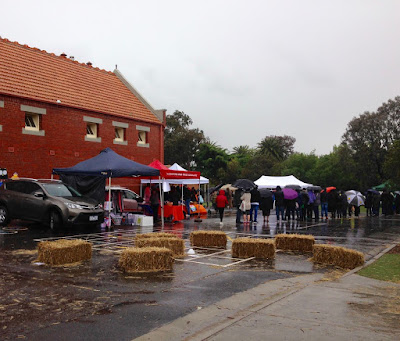 The rain came on and off so that the hay bales that would have been a lovely place to eat on a sunny day looked soggy and sad.  When E performed with his uke in this area, he had one brave soul sitting on the bales but I could hear girls buying cakes humming along.

I felt sorry for those who were queuing for up to half an hour when it rained.  One burst of rain was so heavy that everyone in queue looked really shiny wet with coats plastered to them.  I imagine some of them just wanted to head for home once they had voted rather than to spend time at the fete.  But then I also expect some people might have made a sympathy purchase because it was just so sad to have made so many preparations and have the weather turn on us like that.  But that is Melbourne spring weather and we soldiered on as best as we could. 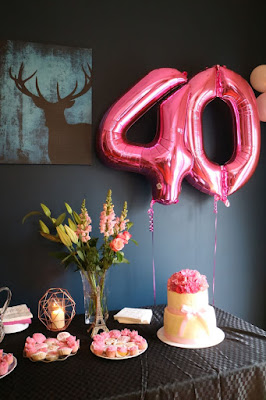 I was ready to go home and curl up after hours at the fete.  But my sister had a significant birthday party in Geelong.  So we headed home to pack our bags and head down the freeway to the party.  It was a great party.  Indoors of course.  She had also dreamt of a lovey spring evening outdoors but it wasn't to be.  The flower-topped two-tiered cake was gorgeous and my family brought along some sweet food.  My contribution was a plate of watermelon. My sister's partner is great at BBQs and had pork and coleslaw buns for everyone.  We had some vegies sausages with our buns and coleslaw.  I was glad of some decent savoury food for Sylvia.  She wolfed down a couple of sausages accompanied by cheezels and then headed out to the trampoline.

My sister looked gorgeous and I really enjoyed catching up with family and some of her longtime friends.  Sylvia was excited to have a late night but I was glad to collapse into bed at the end of the day.

Stone and chop plums.  Chop rhubarb into 1cm pieces.  Place in large saucepan/stockpot with rest of the ingredients.  (At this point I left mine for 24 hours because was busy.)  Bring to the boil.  Simmer at medium heat (reducing to low heat once it thickens a little) until it passed the saucer test or falls off the spoon like jam.  Mine took about 90 minutes.  Perhaps next time I leave out the water!  Ladle into sterilised jars and screw lids on tightly.  I turned mine upside down for about 5 minutes to encourage the lids to seal.  Cool and keep in a cool place until ready to open.

While jam/chutney is simmering, sterilise your jars and lids.  I bake mine for 30 minutes in the oven at 150 C and boil the lids on the stovetop for 10 minutes, then driy them on a rack.  I find it easy to put all the jars in a roasting dish so I am not having to handle them individually.

On the Stereo:
The very best of Edith Piaf
Posted by Johanna GGG at 22:43