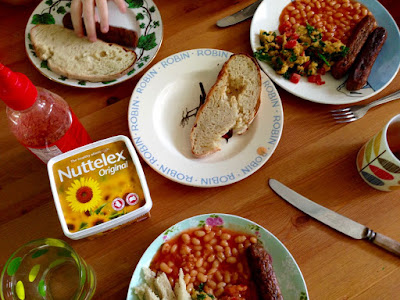 September has been a big month.  Flooding rains, Father's Day, The Melbourne Show and school holidays.  And now October has started with a bang with an nail biting AFL footy grand final that saw the Western Bulldogs win their first premiership in 62 years.  The kids will be back to school on Monday and the gardens are green.  And it is World Vegetarian Day!

We have had some good breakfasts lately.  The one above is on Father's Day.  We decided a fry-up would be the thing for E.  It was overnight sourdough bread (inexpertly cut by Sylvia when I turned my back), chickpea scramble, veggie sausages, baked beans and sriracha.  It was lovely.  Since then Sylvia has been keen on beans and sausages for weekend breakfasts rather than pancakes. 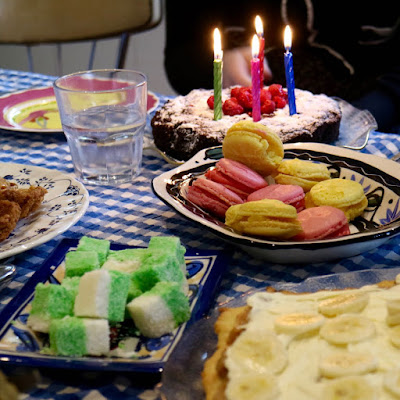 We visited my own dad on Father's day in Geelong.  I took some coconut ice along.  My mum made pizza, and lots of desserts including macarons, caramel tart and chocolate cake.  I was so full after it.  And we also had a birthday, just in case you noticed the candles on the cake and though it was an odd Father's Day custom in my family. 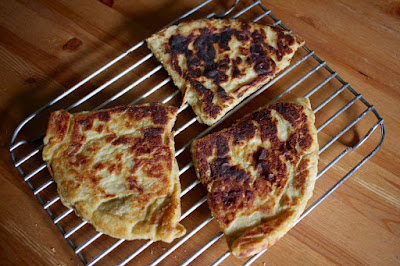 Sylvia asked for sausages and beans on another weekend morning.  I had a bright idea to use up some potatoes in some potato scones.  Breakfast was a lot later but oh so yummy. 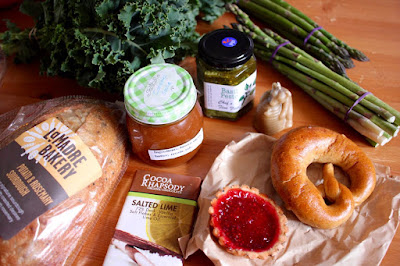 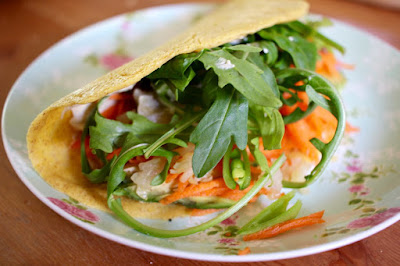 We love our bread but don't always have it in the house.  One day coming home for lunch I wanted a healthy sandwich.  I remembered Ricki's brilliant Toronto Sandwich which is made with a chickpea flour wrap and lots of salad fillings.  It is so quick to put together that I really should make it more often. 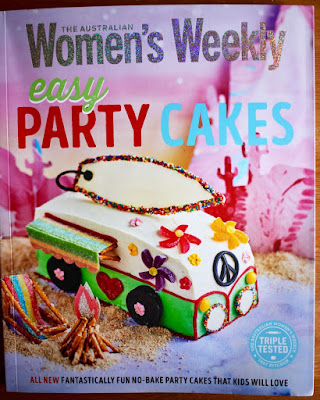 This Women's Weekly Easy Party Cakes book was an impulse purchase from the supermarket.  It is  for those who want fun party food but don't want to cook.  Most recipes either suggest you buy the cakes or use fruit or are no-bake.  I like that it has some fun healthy options and hope it might give me some good inspiration.  I would love to make the camper van on the cover. 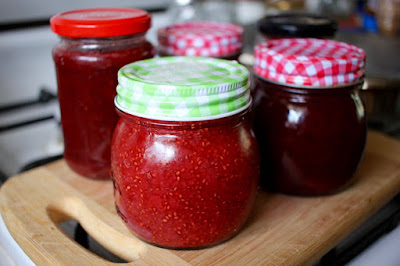 In my kitchen is some home cooked jam.  Actually the strawberry chia jam has been eaten and then mixed into ice cream.  The strawberry and rhubarb jam is for the school fete.  One of the jars did not seal so I have had to give it a test run.  I am glad to report it is really lovely. 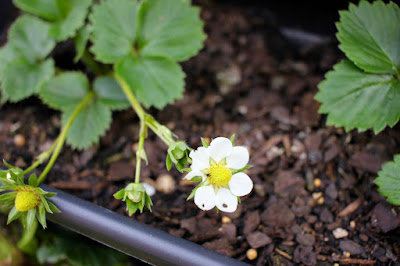 It would be lovely if our strawberry plant produces some fruit.  Little flowers are opening up and giving us hope.  I'd love to have enough strawberries for jam but I suspect Sylvia would eat them before I had the chance. 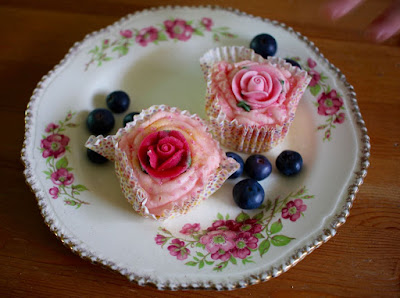 During the school holidays, Sylvia went to stay at my mum's for a couple of nights.  She and her cousins decorated cupcakes while she was there and she brought some home.  Aren't they pretty! 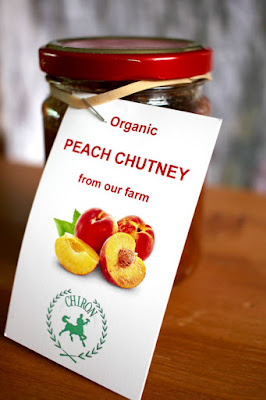 On a visit to the farmers market, Sylvia and I tasted Peach Chutney.  We both liked it.  I was so impressed that Sylvia had found a chutney to enjoy that I bought it.  Since then she has not eaten any of the chutney.   E and I have been enjoying it.   Perhaps the sweetness drew in Sylvia and the odd idea of eating chutney pushed her away.  Or maybe it is just that kids are a mystery. 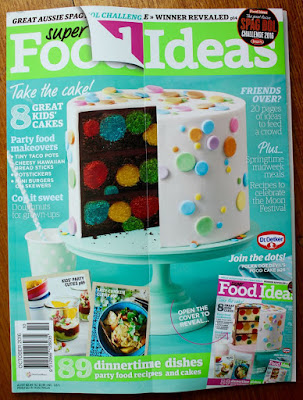 At the Melbourne Show, I bought a Super Food Ideas magazine showbag.  It has so many good things in it, including a copy of the magazine.  Lately I have been very disciplined in not buying food magazines.  I enjoyed flicking through the magazine but haven't had much more time for thinking about making any recipes.  We really liked a Costo Rica clementine anti oxidant infusion drink by Bai and will look out for it in future.  The Lindt chocolates are great too but have been saved while Sylvia eats through the Oreos from her showbag. 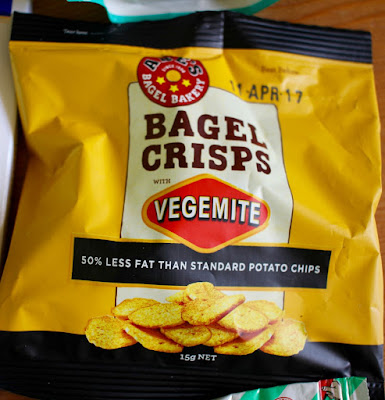 I was really pleased to have a small pack of Vegemite flavoured Bagel Crisps in my showbag.  I bought them for a swimming snack for Sylvia a month or two ago and have not seen them in the shops since.  Which is a shame.  They were so delicious that we were fighting over the last ones. 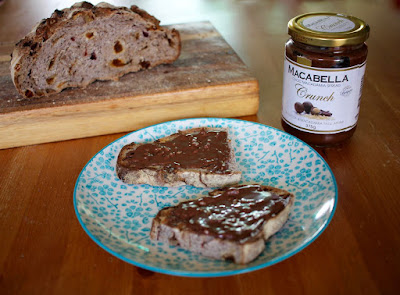 Another interesting addition in my showbag was the Macabella Choc Macadamia Spread (Crunch).  It reminds me a lot of Nutella, which is not surprising as according to its ingredient list it has a lot of sugar and has whey powder.  However it is different because it has crunchy nuts in it (like crunchy peanut butter).  I really liked it on some home made fruit bread. 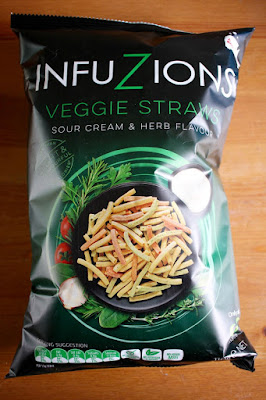 We were tempted by these Infuzions Veggie Straws with Sour Cream and Herb Flavour.  The straws - in spinach, tomato and beetroot flavours really are hollowed out straws, which gives them a lightness and the flavour is very moreish.  However with all the added flavours, they will probably not be a regular with us. 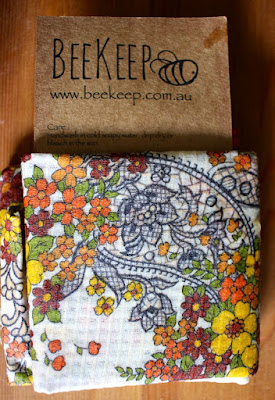 I bought this reusable beeswax food wrap from BeeKeep at the farmers market this morning.  I have read about them and was curious.  It will be good to use less clingfilm if they do work with bread though I rely on seeing how much the bread is risen through the clingfilm so I need to see how these work. 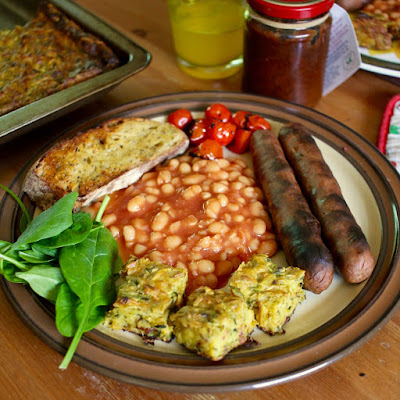 We finish as we started with breakfast. We had a huge brunch yesterday because it was a public holiday.  It was one of those rare days which I ate more for breakfast than tea.  Baked beans, veggie sausages, fried cherry tomatoes, spinach, carrot onion poppyseed bread and zucchini slice.  The last two recipes are coming to the blog soon.

Next month (November) will be Vegan MoFo, a month when bloggers sign up to post often and vegan.  I am on the verge of signing up.  That means I have almost convinced myself to do it but am nervous about finding the time for frequent posting.  It means that I am keeping some of my vegan posts for then.

Meanwhile we have a new host for the In My Kitchen event, that invites bloggers to share a peek into their kitchen.  Maureen, who had taken over from Celia, has decided to pass the baton over to Lizzy of Bizzy Lizzy's Good Things.  It is great that Lizzy has agreed to keep the event running and I wish her well.  If you would like to join in, send your post to Lizzy by 10 October.  Or just head over to her blog to check out all the posts.  They are always fun.
Posted by Johanna GGG at 22:40