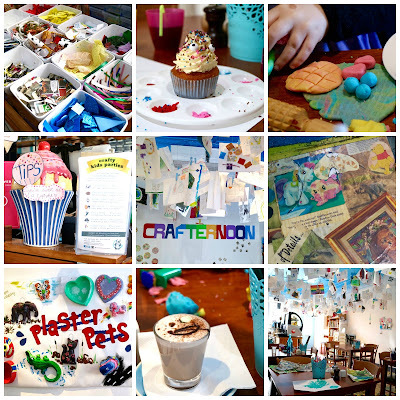 At the beginning of the school holidays, Sylvia and I had an appointment in Brunswick so I wanted somewhere to eat beforehand.  I had always meant to visit Crafternoon in North Carlton and was pleased to find there is now a Brunswick cafe.  (Seems they moved in November and the North Carlton store is now closed.)   We had lots of fun and a nice lunch too.  And after a return visit today, I still think Crafternoon is a great place to take kids. 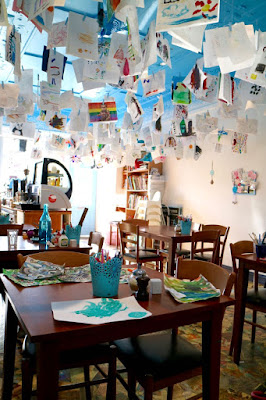 Upon entering the store, we were enthusiastically greeted and led to a table.  I was struck by all the craft and indeed it does seem to focus far more on craft than on food.  Which is not to say we didn't have some good vegetarian options.  But first look at all those pictures. 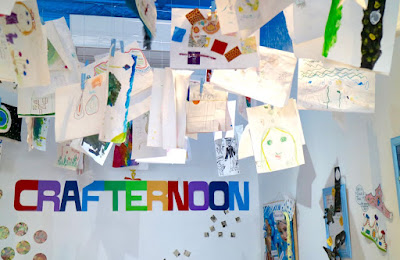 As well as pictures hanging from the ceiling, the floor is an appealing collage of magazine pages and the walls have displays of all the craft options such as badges, bookmarks, masks and crowns. 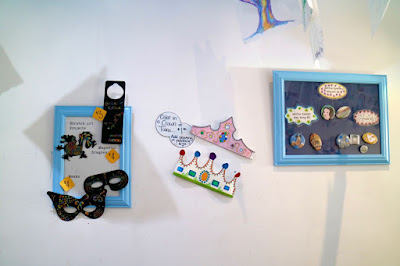 Upon entering we were greeted enthusiastically and given a menu.  The first page of the menu is a list of craft activities available.  Sylvia chose the playdough which came with a box of playdough toys.  She set about making a fruit and waffle ensemble while I drew with the pens and paper offered to us. 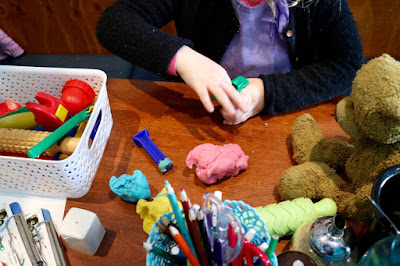 She had a cheese and vegemite toastie ($5) for lunch, accompanied by a baby hot chocolate.  The toastie was great but the hot chocolate was a small glass of lukewarm milk with not much chocolate flavouring.  I am guessing it for for toddlers rather than school age kids.  I think she woudl have prefeered an adult hot chocolate. 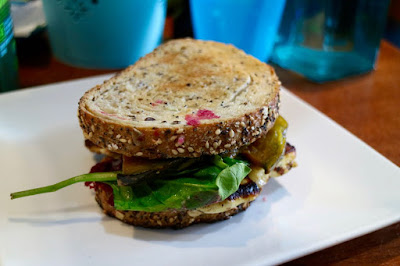 I chose the Roasted Pumpkin toastie ($9), which came with pumpkin, seared haloumi, baby spinach, and cashew dressing on mutligrain sourdough.  It was very nice.  A cut above the average toastie with lots of nice vegies.  I was surprised that the pumpkin was toasted in thin slices with the skin on but it seemed nice and soft. 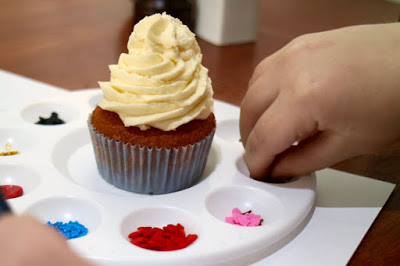 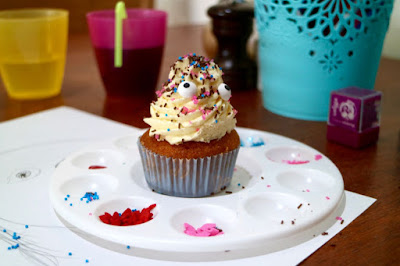 Here is Sylvia's finished creation.  I would have used more of the sprinkles but it seems that, unlike me, she knows that less is more.  The eyes are pretty cute!  It is such a fun idea for kids to decorate their own cupcakes.  It did mean a lot of icing to give kids a large canvas but I liked that it was as much about craft as food. 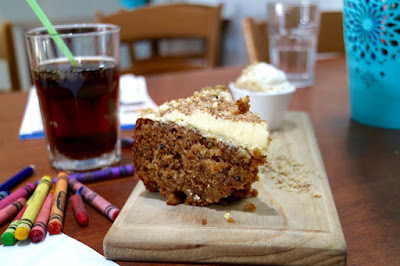 Despite being advised that the chocolate cake was great, I went for the carrot cake.  The cake was lovely and moist with nuts, pineapple and sultanas.  Sadly it was let down by the cream cheese frosting being a bit dry.  I tasted Sylvia's frosting which was soft and perfect so perhaps I was unlucky.  I ignored the cream and was happy just to eat the lovely cake.  Though I wish I had remembered my earlier plan to order the scones with jam and cream. 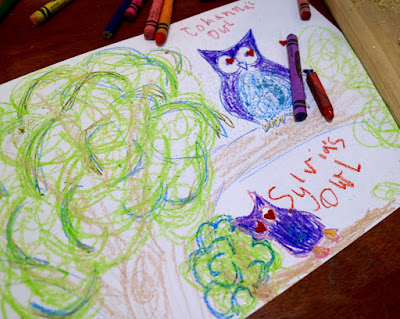 Meanwhile we doodled with the pencils and paper that is provided to every customer.  I love being able to scribble while I wait for Sylvia to finish.  And I thought it cute that she drew an owl to accompany mine.  I enjoyed it being quiet though it lacked some of the energy of the earlier visit but it was quieter than our visit today. 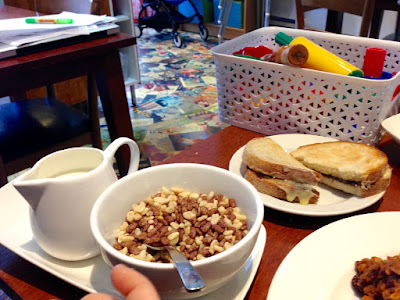 Today Sylvia and I returned with E in tow.  Sylvia was set on having the Billie Jean.  This is a bowl of mixed rice bubbles and coco pops with a jug of milk.  Sylvia didn't touch the milk because she does not like dairy milk so next time I would get her soy milk.  She also had a cheese and vegemite toastie.  Bargaining with Sylvia about menus has become even more complex since she started to read.  This meal was a bit much for her and half of the toastie came home with us to be eaten later.  I think she was more interested in her playdough activity! 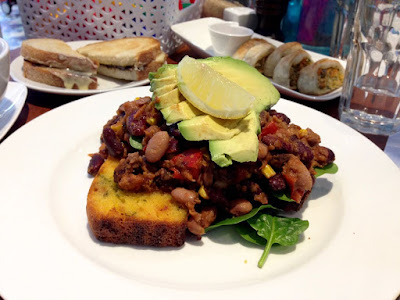 I ordered the Crafty Amigos (which is gluten free and vegan.  The menu described it as "homemade toasted cornbread, topped with corn, capsicum, tomato beans, baby spinach and avocado.  I had imagined it as a fancy fry up but it was more like a tex mex meal.  I really loved it though it was very filling (and worth the $15).  It seems my eyes were bigger than my stomach.

I had also ordered the mini vegie rolls off the kids menu for E and I to share.  They were made with vegetables and marinated feta and really good.  E also enjoyed a soy latte and a poached chicken sandwich which came with an interesting cranberry and pistachio roulade. 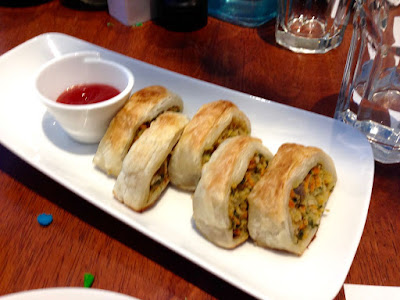 I really loved visiting Crafternoon.  The idea of craft activities while eating out really appeals.  The craft and food on offer is quite overwhelming but there are lots of good options and an awareness of dietary options.  It is an entertaining place with lots to do and look at, newspapers and books to peruse, and fun names for meals like "Happily Ever Crafter".  I'd still like to try the pea fritters and the mushroom mountain.

As we were leaving, two of the staff were dressed as fairies in preparation for  a party and clearly enjoying themselves.  When Sylvia asked for a different colour of playdough, they were happy to oblige and when they saw she did not like her dairy milk they offered soy milk.  I am sure we will be back and will be warmly welcomed when we return.