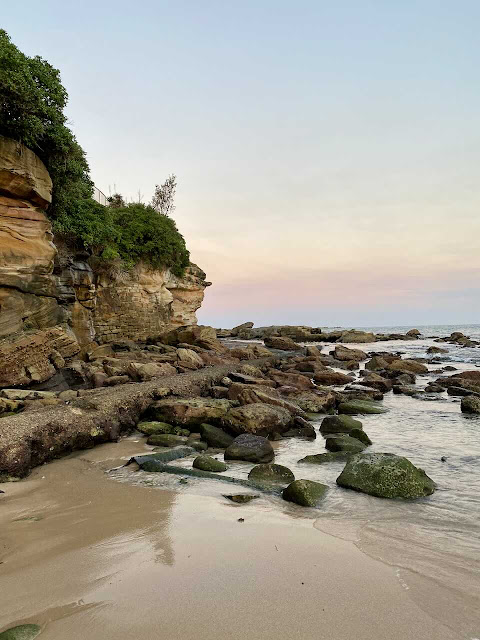 My workplace sent me to Sydney for a Centre meeting a few weeks back.  It was my first time on a plane since Covid changed our travel landscape.  I enjoyed getting out of town and staying at the Coogee Bay Hotel which is just across the road from Coogee Beach.  And the meeting was really worth attending.

However there were little reminders that we are still living in Covid-normal times.  I was waiting for plane at the gate when a woman behind me, who was arriving on the previous plane at the same gate, gave me a surprise by telling someone she had to get tested for Covid and isolate.  Later I realised it was a planeload from Perth who had recently had a Covid outbreak.  I was glad that they were testing and isolating when I heard the following weekend that there were more cases in Perth.  It gave me some peace of mind.  It was also weird to have to wear a face mask in the airport and on the airplane but again understandable.  More amusing was the announcement on the plane that if we needed to use oxygen masks in an emergency that we should take off our face masks first!  Really! 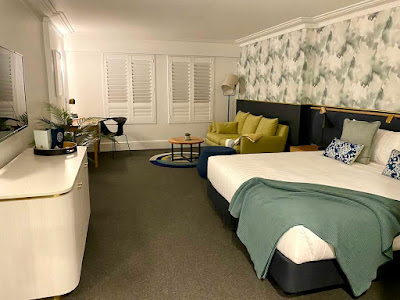 I was glad to arrive at my room at the Coogee Bay Hotel.   It was a treat to have a nice hotel room with some wallpaper and colour!  So many hotels I have stayed with for work have been so bland!  Not that I was in there that much over my two night stay.  I think I was in the one of the Boutique rooms.  Some of my colleagues had a sea view but I look out over the houses. 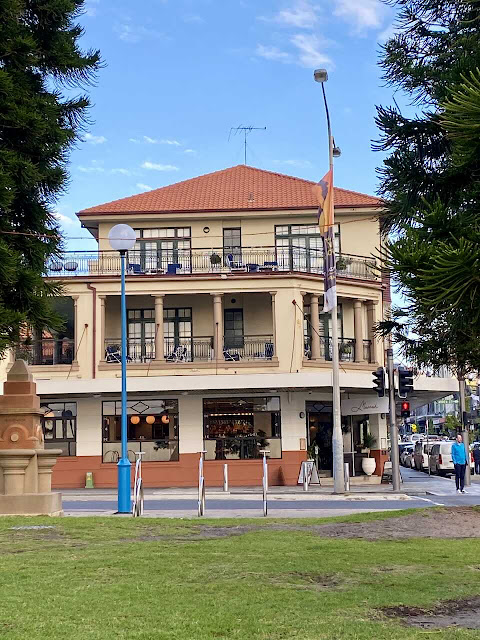 In the morning I rose in time for breakfast at the hotel.  I had taken a later flight because Sylvia had returned from school camp on the same day I left.  After last year, we can't complain about being able to go to school camp or fly to Sydney.  I had a lovely breakfast of corn fritters, tomato jam, persian feta, avocado and coriander.  (I forgot to take a photo while catching up with colleagues.)

The Coogee Bay Hotel dates back to 1863 when it was a school and then converted to a hotel in 1873.  It has some great historic photos of the beach on its walls, but I didn't see any information about the architectural history.  And all I could find online are some plans in 1913 but no images of it in the Nineteenth Century. 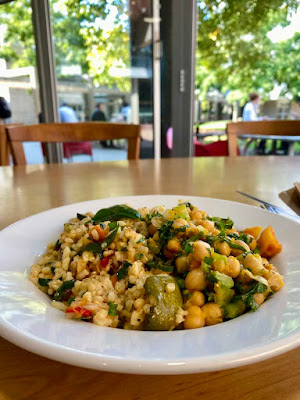 The first day of our meeting was busy with training, presentations and a tour of my Sydney colleague's office.  She has a room with an amazing view of Sydney.  At lunchtime we went to a nearby cafe (JGs) where I had a delicious vegetable rice and a chickpea and pumpkin salad. 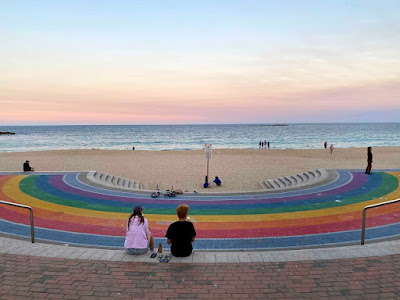 After work I had a little time before dinner but as it is now autumn, the sun was setting early and it seemed too dark for a swim.  I could not resist going down to the beach for a walk. 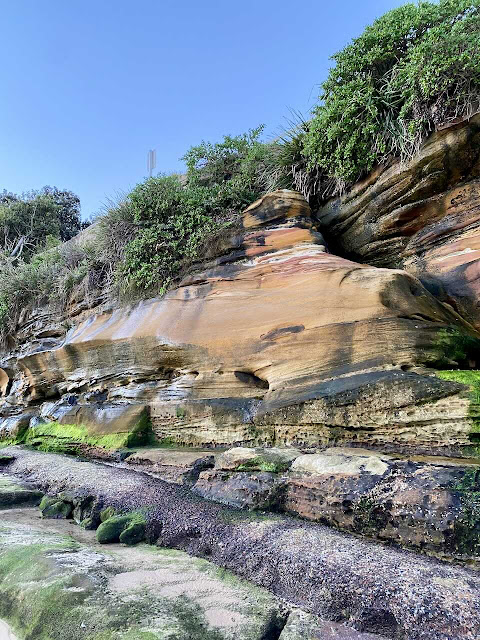 Coogee Beach is in a little bay with some wonderful cliffs and rock formations.  I loved the colours in this cliff.  Instead of going in, I took off my shoes and waded in the tide.  Of course this is not so smart and the waves washed in with some power and wet my skirt.  I had to change before dinner. 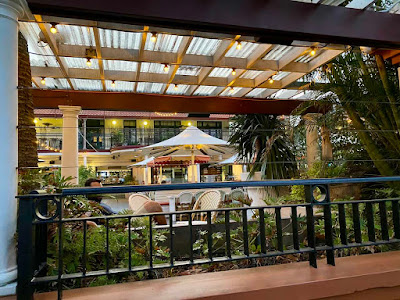 We had dinner in the Garden.  Again I didn't take photos while socialising with my colleagues but I enjoyed it.  This is a really big space but was quite busy.  One of my colleagues from Sydney says they often have cricket and football teams there.  For dinner I had the Vegetarian Pizza which had eggplant, roasted peppers, zucchini, dukka, mozzarella, topped by dollops of baba ganoush.  The baba ganoush was cold and I was not so keen on the hot pizza with cold dip but it was a nice pizza and a little different to the usual vegetarian options.  I was also pleased they had Mocktails and I had a strawberry and blood orange nojito which was lovely.  After dinner we walked to an ice cream shop and then stood in the park looking over the sea talking while we ate our ice creams.  What a treat! 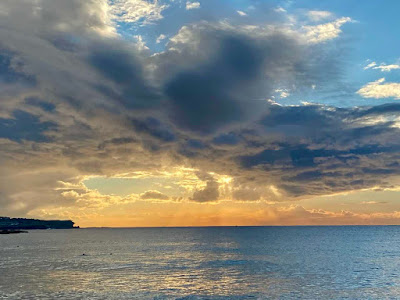 On the second morning I was so determined to have a swim while in Sydney that I was out of my hotel room earlier than I usually wake up at home.  At 6.45am the sky was spectacular and the beach was pretty quite but there was a handful of hardy swimmers. 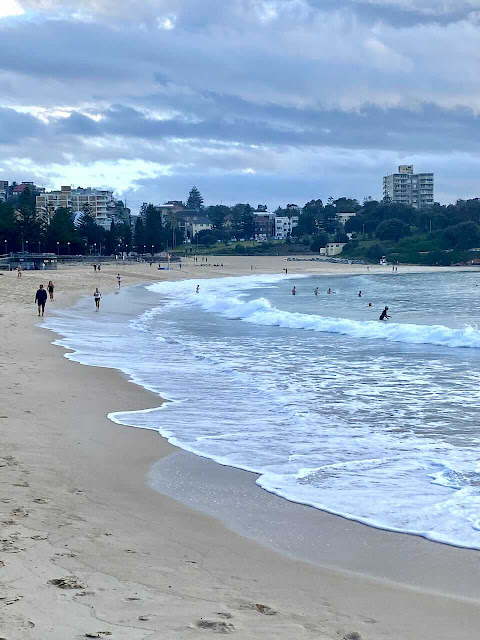 The water was not too cold after the initial shock of dipping my toe in.  The waves were pretty fierce near that edge of the sea but more gentle when a bit further out.  I found the beach very different to those I am used to along the Great Ocean Road in Victoria.  Our beaches are flat and I was taught never to go out where it was above waist height - because even at this height the waves can be over your head.  But in Coogee, the beach got deep really quickly and before I knew it I was up to my neck.  It was fun to be out in the waves at the time of morning. 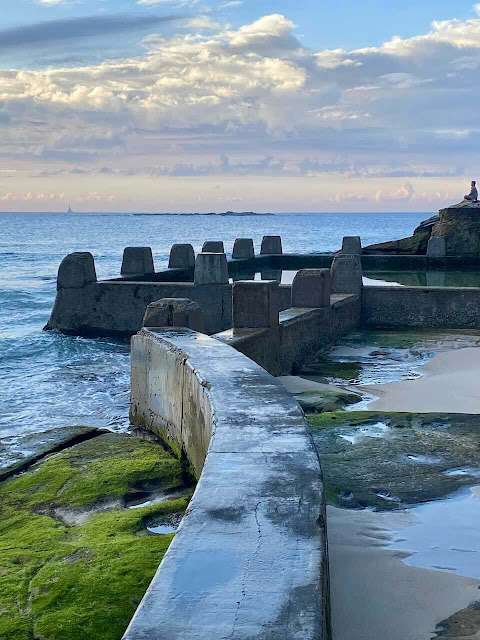 After I got dressed (with the shrugging on and off at the beach though I am sure there were some change rooms somewhere I should have used) I had a quick walk along the beach.  I am fascinated by the swimming pools built into the sea in Sydney.  I had hoped to get a swim in one but I only managed to walk up to this one by the surf club.  No one was about and I could not work out if you had to pay to go in it. 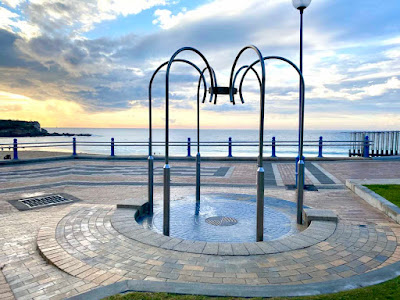 One important part of going to the beach is washing the sand off.  It was only on the second morning I noticed this plumbing marvel.  When I go to the Great Ocean Road beaches, I am lucky if I can find one shower.  I loved how this had five shower heads, though I am not sure I would like the rough and tumble of the showers in the busy times. 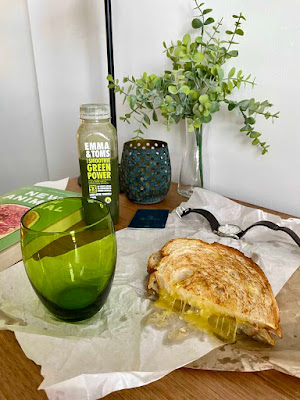 After my swim I went foraging for breakfast.  Which is to say I headed up Coogee Bay Road to a bakery where I ordered a cheese toastie on the recommendation of a colleague.  It seemed odd at first that it was only half a toastie but when I ate it and found how big and rich it was, I appreciated the restraint.  I also had one of the delicious Emma and Tom's green juices. 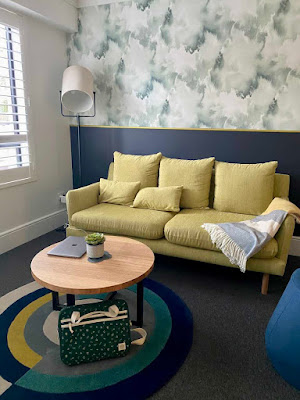 Then I packed up the rest of my case and left.  I dislike packing wet bathers but once I rolled them up tightly in a towel, it really helped wring out as much water as possible. 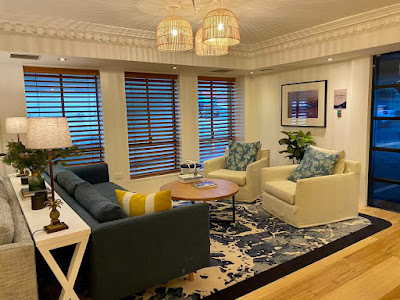 I headed down to the hotel lounge to check out and meet my colleagues for another day of training and meetings.  I was meant to head to the airport at 3pm with a colleague for our flights but his flight got changed to 6pm.  My 4.30 flight changed to 5.30 and then that was cancelled and they were looking for a seat for me.  I was glad of the advice from colleagues to head to the airport to organise another flight.  By the time I was in the taxi I got a text asking me to ring them about my flights.  When I rang, there was a message saying no one was able to take my call and I was given another number to call.  I rang this number and was told I was to be on hold for 1 to 2 hours.  Thank goodness by then I was at the airport and able to speak to a staff member face to face. 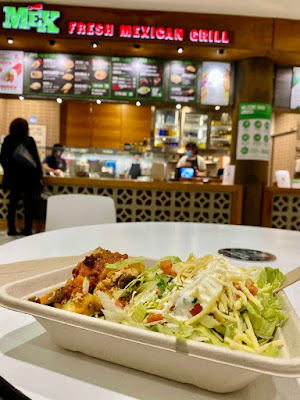 I got a 7pm flight.  Sylvia organised a sleepover so she was not waiting at home for me.  I stopped at Mad Mex's for a burrito bowl as I knew I could not rely on food on the plane.  I almost had finished my book (New Animal by Ella Baxter) by the time I got home at 9pm.  I was pretty tired but felt lucky to get to spend time at a Centrewide meeting, get an ocean swim and see some of a part of Sydney I had not visited before.

Postscript:  We were extra lucky we had chosen that week and not the next one when a few people got Covid in Sydney.  Even though the state borders weren't closed, there would have been a lot of uncertainty about the trip going ahead.  There was enough to worry about in our Covid normal times with catering, social distancing in meeting rooms and zoom hook up for those who could not travel.