Caramilk ANZAC Biscuits - not for the traditionalists! 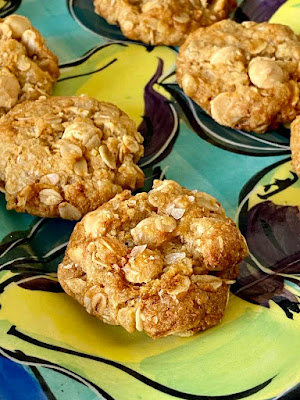 I have a great workplace but it still is a treat to have everyone cheer me in a group meeting.  We had a meeting a few weeks back where I announced at the end that I had made ANZAC biscuits for morning tea.  The cheer that greeted me was no doubt related to happiness at finally sitting in the one room for our group meeting instead of on zoom and then being able to gather to share baked goods afterwards!  I was really pleased with the batch and made another delicious batch soon after with some caramilk choc chips thrown in. 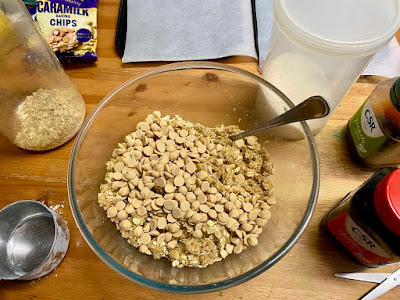 I took most of my first batch to work because they were so good I didn't want the temptation.  But I had promised Sylvia that I would make a batch for her to take to E's for his birthday. I had recently seen Cakelaw post a caramilk choc chip cookie recipe.  The golden syrup in ANZAC biscuits make them a bit caramelly so this seemed a great opportunity to try the caramilk choc chips.  I also knew sylvia and E love it.  Cakelaw wisely warned that it was very sweet.  Caramilk is a cross between white chocolate and caramel so it is all the sweetest stuff in big toothache!  I did a bit of tweaking the recipe to tone down the sweetness, including a sprinkle of salt flakes on the biscuits.  Sylvia was not so impressed by this but I quite liked it. 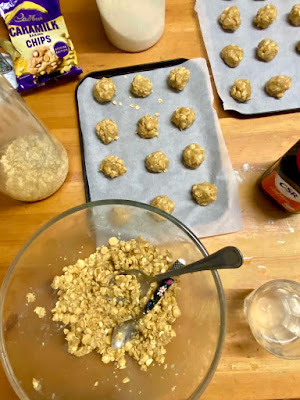 In the past when I have had a brainstorm about putting choc chips into ANZAC biscuits I have mixed them into the dry ingredients and accidentally melted them by pouring the hot melted golden syrup and butter over them.  I was so busy trying to make sure I didn't melt the choc chips that I forgot the bicarb in the butter and golden syrup mixture.  What a loss!  Seeing the butter and golden syrup froth up is one of the fun things about making ANZACs.  Luckily I remembered in time to add the water and bicarb.  It did not just make sure there was enough air in the biscuits, but it also fixed a crumbly mixture. 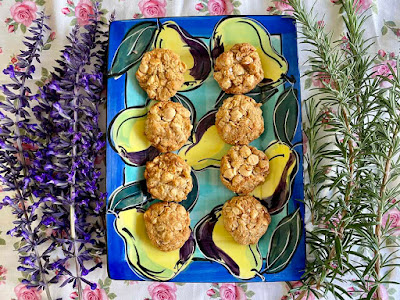 Of course when I told my mum she said they weren't ANZACs,  She is right.  The recipe is very carefully guarded.  But why can we alter how much flour we add but not tweak an ingredient in the ANZAC spirit of innovation and defiance.  I was so happy with these biscuits that I even considered making another batch.  The third batch is still waiting to appear.  Maybe around next ANZAC Day, which I often get the urge to bake ANZAC biscuits.

Once it is frothing, pour the golden syrup mixture into the bowl of dry ingredients and stir to combine. Stir in the choc chips into mixture.

On the stereo:
Brood - My Friend the Chocolate Cake