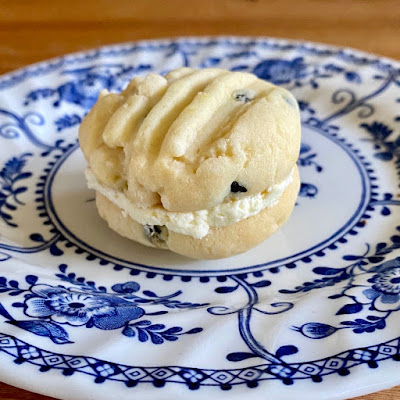 These passionfruit yo-yos were made months ago but it seems more like a lifetime ago that we were watching the Australian Open tennis with cheering crowds, eating summer fruit and taking biscuits into work morning teas.  I wonder what next summer will be like. 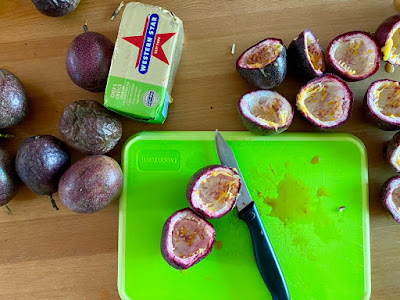 I have had passionfruit yo-yos on my to do list for some time.  Then in summer I had a bounty of passionfruit (from the shops) and a morning tea to bake for.  It was time.

Passionfruit yo-yos are one of those biscuits you would expect to see at an Australian afternoon tea or cake stall, probably hosted by the CWA.  Yo-yos are similar to melting moments.  The only difference I can see is that the former has cornflour and the latter has custard powder.  But I could not see anything such as passionfruit melting moments. 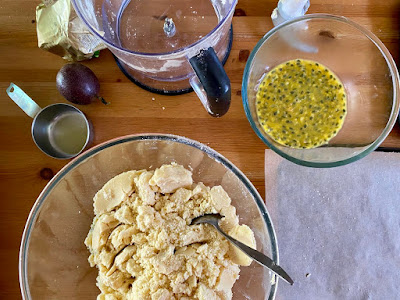 Before I started baking, I had a chat to my mum.  She makes a lot of yo-yos.  She said to put it all in the food processor.  So I did, before I remembered I was doubling the recipe so I had enough for work and a few over to send home to my mum and dad.  The mixture was pretty crumbly until I added the passionfruit.  My mum also persuaded me to use self raising flour rather than plain.  I think it was a good idea.  I forgot to add lemon zest but I think this or lime zest would be great. 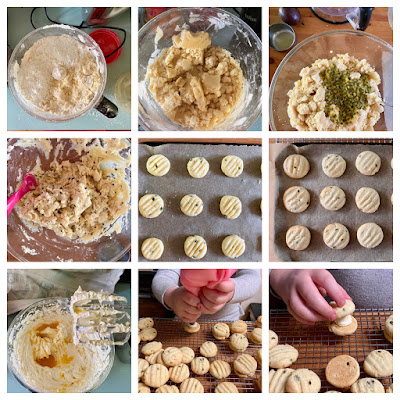 Though I love custard powder in a melting moment I do love the name yo-yos.  There aren't many biscuits that look like childhood toys.  We loved a yo-yo when I was a kid.  I still find it fun when they are thrown into films and movies.  Here are a few examples: 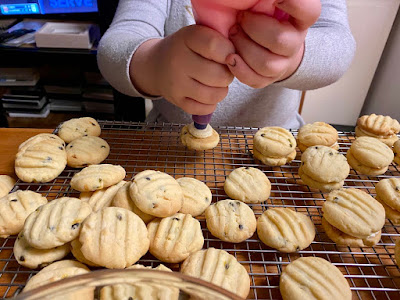 We made 7 dozen biscuits.  The is a lot of piping.  Sylvia and I had great fun making these.  She is very adept with piping buttercream to sandwich the biscuits together.  I liked these but did not love them.  I love melting moments that actually melt in your mouth.  These were not quite as buttery and short as I expected.  But they went down well as work.  I have missed our work morning teas but my colleagues have been a great support while working from home.  And there is a glimmer of hope on the horizon.  Yesterday, I saw them again for the first time since lockdown.  A group of us had a social distancing walk around the Carlton Gardens, because lockdown has eased enough that we could finally get together in a group of 10.  It makes me hopeful that morning teas will come again!

Sieve as much juice out of passionfruit pulp as possible.  Make buttercream first by beating (with electric beaters) the butter and icing sugar for 6-8 minutes until pale and creamy.  Beat in passionfruit juice.  Set aside.

To make biscuits, mix butter, icing sugar, lemon rind and flour in the food processor until almost coming together.  Mix in passionfruit pulp, including seeds.  If you have time to let the mixture set in the fridge or at room temp for 30-60 minutes it will be easier to handle but it is fine if not.  Roll 2 tsp of mixture into a ball and place on a lined oven tray.  Continue rolling balls of mixture and place about an inch apart on tray.  Flatten slightly with fork and gently remove fork to leave a mark.  Bake for 12-15 minutes until golden brown.  (I did 12 minutes but found that 14 was better in making them crisp all the way through.)

Once biscuits are cool, pair biscuits of the same size, pipe or spoon about 1-2 tbsp of buttercream on one of the paid and press the second one top so there is about 3mm of buttercream in the middle.

On the Stereo:
The Sound of White: Missy Higgins
Posted by Johanna GGG at 22:06