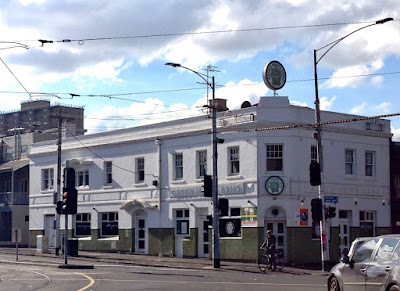 I was so excited to hear that a new vegetarian pub called the Green Man's Arms was opening in Carlton and that it had kombucha on tap.  I mean hyperventilating excited!  Though I know Carlton well, the former pub Percy's at the corner of Lygon and Elgin Streets was not one I was familiar with.  But now I have been to the Green Man's Arms a few times I would love to be a regular there. 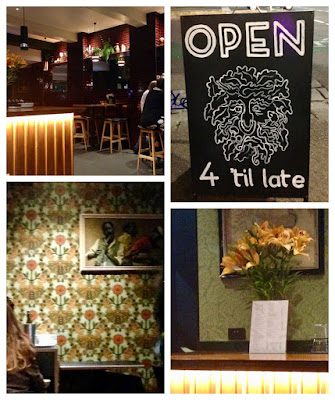 The first glimpse I had of the place was Cindy and Michael's review late last year soon after opening.  They enjoyed it but the dishes didn't look mind-blowing - with only one vegan main - and nor did the place.  Move forward 6 months, a new chef and the place seems to have hit its stride.  The majority of dishes are vegan with quite a few gf options, and lots of innovative dishes, as one would expect of a head chef who spent 6 years at Ottolenghi restaurants.  Looking back at Cindy and Michael's photos, some nice decorative touches have been added to the retro wallpaper such as the collection of Australiana plates high on one wall of the dining room. 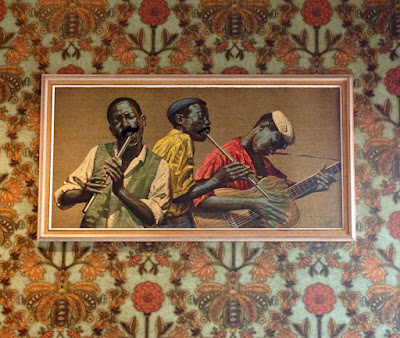 I had to try it.  So I organised to go along for lunch with E and Sylvia one weekend only to find that it did not open til 4pm.  I go out for many more lunches than dinners so I was disappointed.  When I went there this week I was told they are now opening for lunches on Friday, Saturday and Sunday.  Such welcome news.  Though I am sad to say I went with work colleagues today and it was really quiet.  I hope it is just warming up as people get to know it is open for some lunches. 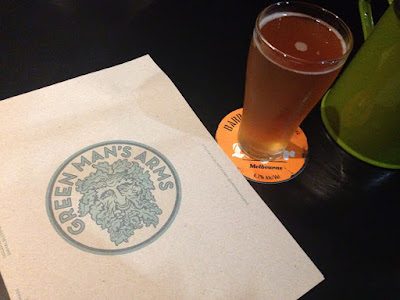 You will see in my photos that I mostly been there in the dark.  You might not see but I always order the kombucha on tap.  When you don't drink beer there is something very satisfying about seeing your drink being pour from a tap rather than being served it in a little bottle.  It isn't terribly sweet but is refreshing and full of flavour. 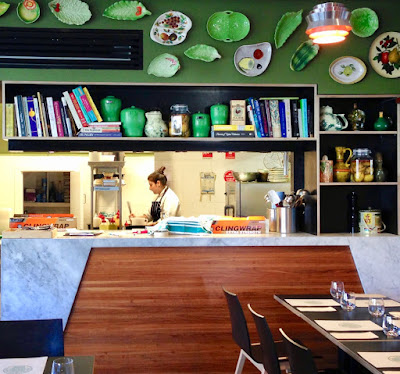 Finally I managed my first visit with my friend Heather on a Monday evening after a movie (I Tonya).  It was late and we were seated on a high table out in the modern bar area.  In subsequent visits, one with E and Sylvia, another with Heather, and one with work colleagues, we have sat in the  retro dining area at the tables and chairs.  Let me tell you that when you sit and watch meals come out of the kitchen, they look so good that you just want to eat everything on the menu.  Let me take you through what I have tried. 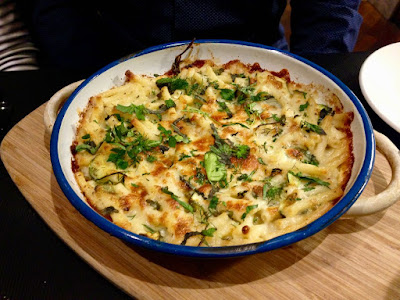 Heather and I shared the Mac and cheese with zucchini and fresh herbs ($17.50)  I liked it but I prefer my mac and cheese more creamy and more cheesy.  Perhaps the addition of zucchini made it less creamy.  If you like your mac and cheese quite light then I recommend this one.  I think this is the only dish I have tried that is not vegan. 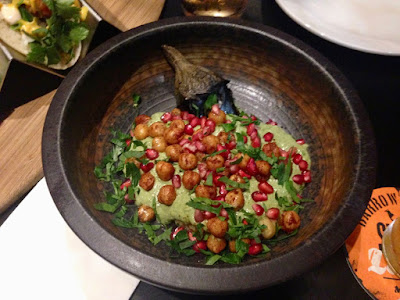 We also ordered a couple of starters to eat with the mac and cheese.  I really loved the Whole charred eggplant with green tahini, pomegranate, crispy chickpeas and pistachios ($14).  The eggplant was cooked to melting perfection.  I was surprised at how much sauce was on it but enjoyed it.  It was really tasty with the chickpeas and pomegranates.  We had to ask for some bread to mop up all the sauce. 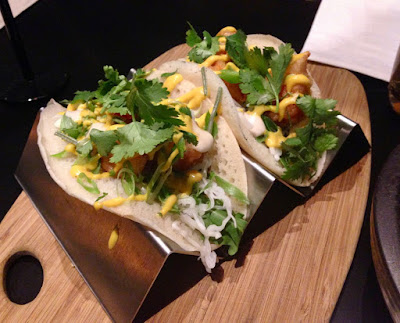 We also ordered the Yemeni Luhuh - pan baked bread served like a taco, filled with tempura sweet potato, lemongrass pumpkin puree, lettuce, pickles and chilli.  These have now been replaced on the menu with "Flabread Tacos".  While it lacks the poetry of "Yemeni Luhuh" it is easier to pronounce and understand.  It seems that the filling change from time to time as these sweet potato fillings are no longer available.  They were really good.  An innovative flavour combination and, as they come in twos, were easy to share.  (My colleague had one with tempura avocado today that she loved.) 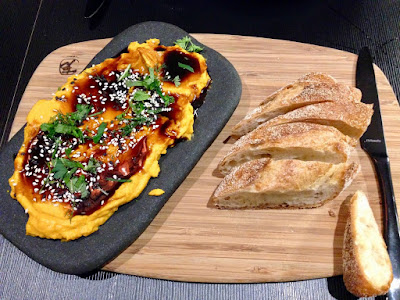 My next visit was a school holidays evening out with Sylvia and E.  We were about to order the Butternut squash and tahini spread with date molasses and sesame served with sourdough ($12.50) when we were offered the dish with compliments of the chef.  I am not sure why they were doing this that night but I don't look a gift horse in the mouth.  The pumpkin dip was really delicious.  Pumpkin goes so well with tahini and a bit of sweetness.  The bread was lovely too and we didn't grudge paying for some extra bread to get through all the dip. 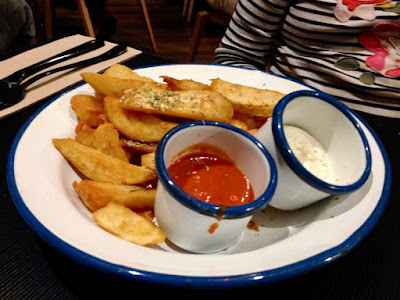 Sylvia ordered the Pommes Frites: smashed new potatoes, fried with garlic aioli and bravos sauce ($8.50).  This is about as adventurous as she gets but she went away with a new found love of aioli (so we now have it in our fridge).  It would be nice if there was a kids menu but it isn't a place that attracts lots of kids.  But I was pleased that the serving was quite generous enough for her to eat her fill and have plenty to share with us.  And they were so crispy and delicious that we wanted to share. 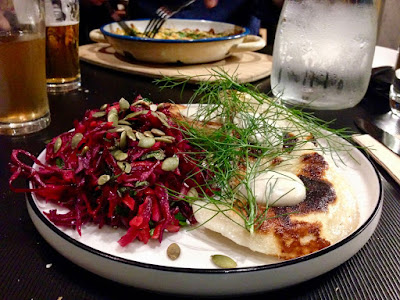 E had the mac and cheese which he enjoyed.  I ordered the Hand made vegan dumplings filled with desiree potato, dill, and caramelised onion with beetroot slaw and cashew sour cream ($24).  This has to be my favourite dish so far.  The pierogi was superb with the cashew sour cream, though I had to push all that dill aside!  (I guess that is the influence of the chef that worked at Borscht Vodka and Tears.)  It had so much slaw on the side that it felt really satisfying and healthy.

The pierogi does not seem to have the slaw on the side in the latest iteration of the menu which is a shame but maybe it will come back.  I had the pierogi today with the caramelised onion and silverbeet.  (Sadly the chickpea pancake had disappeared from the menu which had got great reviews.)  This serving had more pierogi with the vegies hidden underneath.  Again the dumplings were superb and wonderfully warming on a winter's day. 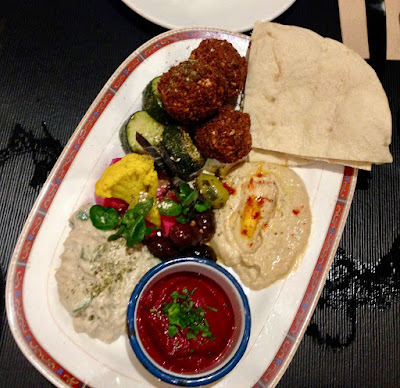 I visited again after seeing The Book Shop at the Cinema Nova with Heather.  Again we agreed to share dishes.  We had the Mezze Plate of falafel, hummus, a chunky tahini dip and a slightly spicy beetroot dip, cauliflower and beetroot pickles, carrot slices, cooked zucchini slices, olives and flat bread ($19.50)  It was really lovely.  The falafel was quite crunchy on the outside, just as I like it, and I would have welcomed more than three.  The dips were really good, though I was a bit uncertain about the spicy beetroot one.  I love the pickles and olives too. 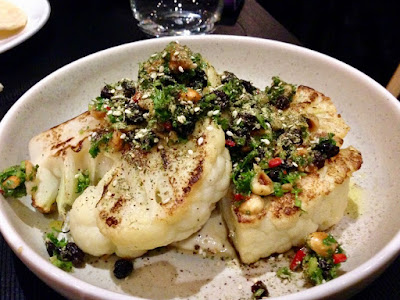 We also shared the Cauliflower steak with cauliflower puree, currant, lemon zest, herb and nut salsa with zatar ($24).  I liked this but it was not quite what I expected.  The cauliflower was just cooked rather than really crisp on the outside and soft on the inside.  (Yes I had hoped they would cook it as I wish I could do at home.).  The topping was really good and far fancier than anything I would do at home.  However I feel that this was not quite what I would expect for $24 as it seemed more side dish than a substantial main. 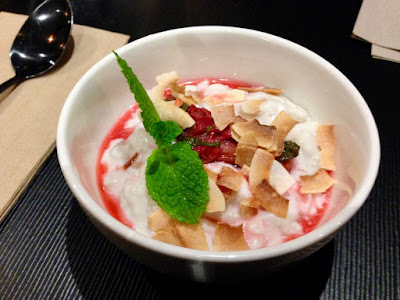 The up side of the cauliflower steaks being so light is that we had plenty of room for dessert.  I was very tempted by the halva ice cream and the chocolate tart but, it being a cold winter's evening, I decided I needed the warmth of the Vanilla rice pudding w rhubarb, tarragon and orange blossom ($10).  Only, when I took my first mouthful I found it was cold rice pudding.  And I do not like cold rice pudding.

I saw the chef walking past and asked him if it was served warm.  He said he could microwave it and I said yes please.  He took it into the kitchen and yelled, they hated it!  I assume he was joking.  I hope so because once it was warmed up I loved it.  The rhubarb was cooked to melting perfection and added great flavour.  It contrasted nicely with the crunchy texture of the toasted slivered almonds. 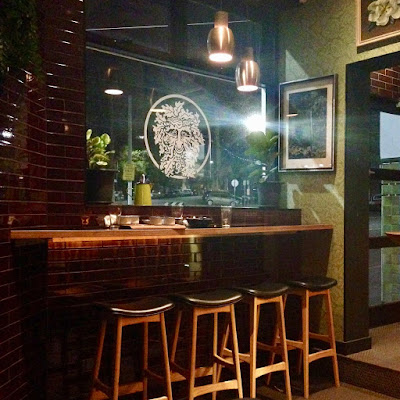 I intend to keep visiting the Green Man's Arms and am sure I will try many more dishes.  This is just for starters.  I highly recommend the place.  It is the only pub I know serving kombucha on tap and I love it just for that.  But the food is really delicious and interesting, the decor is stylish and thoughtful, and the staff are welcoming and accommodating.  It is one of those places to make vegetarians and vegans feel comfortable while having a menu that is appealing enough for omnivores who want good food.