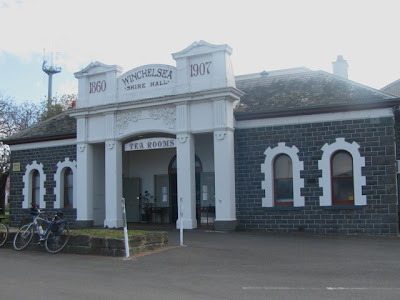 Blink and you will miss Winchelsea. However the small town holds a special place for me, having spent a lot of time there in my childhood. Not to be confused with the other town of the same name in Sussex, England, the Australian Winchelsea grew around the Barwon Inn, established on the banks of the Barwon River in 1842. The town also has the dubious claim to fame for the local mansion, Barwon Park, where Thomas Austin released the first rabbits into Australia. 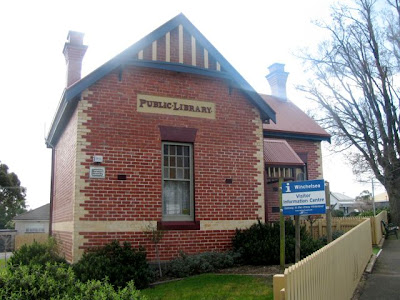 Those who head west of Melbourne along the Great Ocean Road will miss it but if you take the Warnambool train or the Princes Freeway, as we did on our recent trip to Port Fairy, you will go through the town. One can't help by notice some of the historic buildings such as the Public Library (above - now the tourist information centre), the Shire Hall, the Globe Theatre, the old bluestone bridge, and the School. 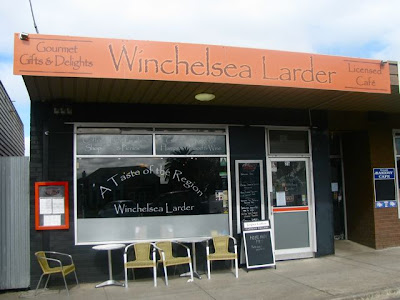 In days of old, travellers would stop for refreshments in the town. Today they can still do so at a number of establishments but today I will tell you about the one where we stopped recently. In an unassuming shopping strip opposite the Shire Hall is the Winchelsea Larder. It is run by my old friend and former housemate. Though I will not claim to be completely objective, I am happy to recommend it, having shared cooking with Rochelle for a couple of years in a student household. 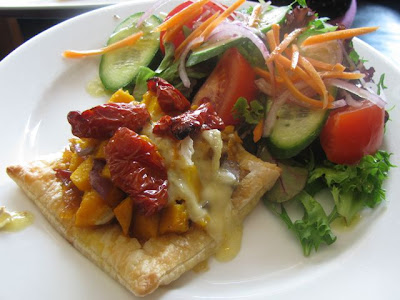 Anyway, you don't have to just take my recommendation. When we stopped for lunch on a Thursday, the place was doing a fine trade. I was pleased to have quite a few vegetarian choices for my lunch and chose the pumpkin, brie and sun dried tomato tart. The tart was delicious with some sweet caramelised onions under the pumpkin, and a generous salad. 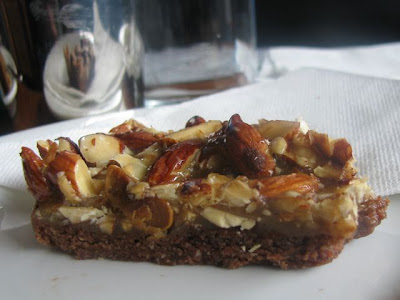 We also had some dessert. E chose a toffee pecan crunch. He found it a bit chewy for his liking but I loved the thick gooey toffee filling topped with lots of nuts. 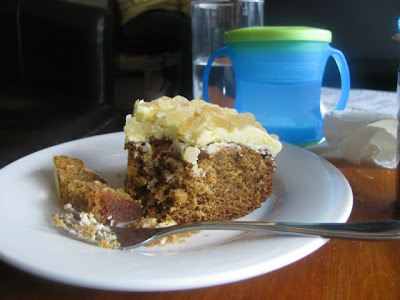 We all shared some gingerbread with lemon icing and candied ginger pieces. This was more E's sort of thing and Sylvia enjoyed the cake, though she is not into icing at the moment.

Rochelle sat down to catch up with us while we ate and it was great to see her. She is a busy person; a few times she disappeared when her help was needed. She bakes quite a lot of the food that is served, and makes an effort to make sure there are vegetarian and gluten free options. In such a small town she also knows many of the fellow diners which makes for a friendly atmosphere. 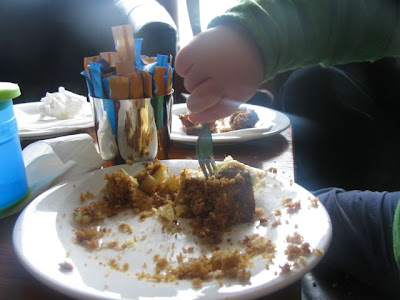 We sat in some couches by the window, and more importantly, by the box of toys. Sylvia had a lovely time with the blocks while E showed off his drawing skills on the etch-a-sketch. Though I think Sylvia's favourite toy at the moment is a fork. Hours of fun! 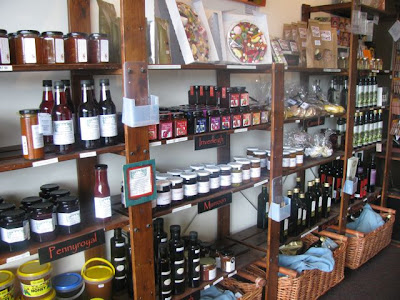 Winchelsea Larder promotes the regional producers and nowhere is this more evident than in the impressive display of foods on one wall. They are arranged according to locality and it was interesting to see that as well as nearby Geelong, there are many small towns represented.

I was very tempted by the "chocolate pizza" (big discs of chocolate studded with lots of lollies) but we chose to buy some raspberry vinegar, yo-yos and raspberry liquorice. The latter two were much appreciated in our holiday cottage. E said the raspberry liquorice was the best he had ever tasted. We were more than happy to support some small local producers!