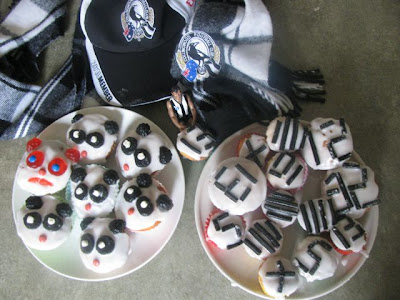 My dad is a one-eyed Collingwood supporter. His grandfather was mayor of Collingwood, many of his aunts and uncles worked for the council. When I was young my brothers' teddies were named after Collingwood players. My little 2 year old nephew Cooper already knows his team. Though, I am the only one of my dad's children to live in Collingwood, I don't barrack for them but I do see an opportunity for cupcake decorating when his team gets into the grand final.

Sylvia and I went to Geelong yesterday to see my nieces. They had lept at my suggestion of cupcake decorating. Mum had already promised the cupcakes to a grand final gathering today so I focused on Collingwood's team colours: black and white. 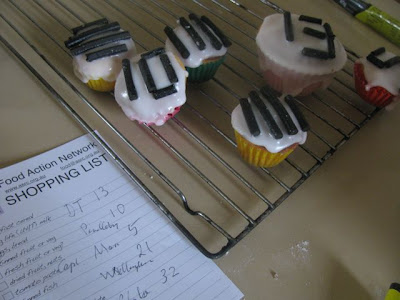 I decided to get some liquorice to decorate some cupcakes with black and white stripes and make some numbers like the players wear on the back of their footy jumpers. Maddy did the research on numbers by consulting the household authority, my dad. It seemed from talking to everyone that Dale Thomas' number 13 was the popular one. 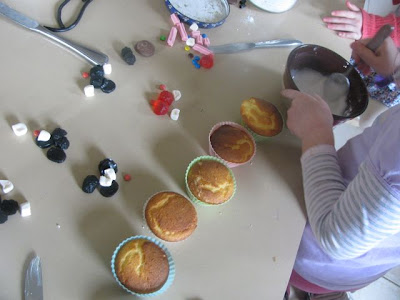 Grace can't eat liquorice so I had a think about a gluten-free option for her. Lorraine often makes cute cupcakes so I had a look at her list and found some panda cupcakes. It occurred to me how perfect they were, being black and white. Lorraine used fondant but I take delight in using lollies (or sweeties or candies depending on where you live). So Maddy, Grace and I went to the Yummy Mummy Lolly Shop to buy liquorice and some lollies to make pandas. 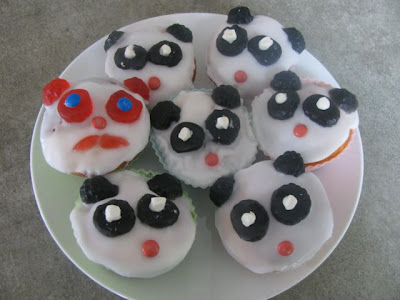 Back at my mum's we ate cheeseymite scrolls and pancakes while the gluten free cupcakes cooled. Then we set about trialling how the lollies looked on the little cakes before Grace and Ella mixed up the white icing. We used black raspberries for the eyes and ears. I cut them in half and used the flat bottom for the eyes and the bumpy top for the ears. I cut the whites of the eyes from milkbottles and we found some pink mini m&ms for the nose-cum-mouth.

I always buy more lollies than we use as I toss around lots of ideas in my head. We had bought some red raspberries so there was a rogue panda with blue eyes. I also bought some chocolate buttons but could not find decent chocolate in the right size. (I suspect I might find the right size at the Vic Market or other specialty shops). 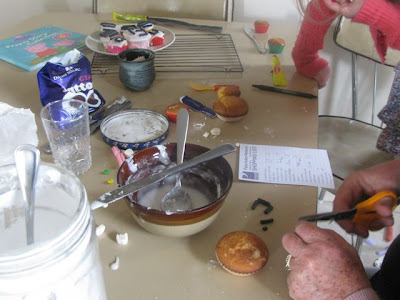 Sylvia was more of a hindrance than a help and slowed me down a bit. Mum took her off for a play but eventually I had to put her down to sleep. We still had a few numbers to go so mum helped with these. Then I had time to get out a few of my dad's Collingwood paraphernalia for some photographs. 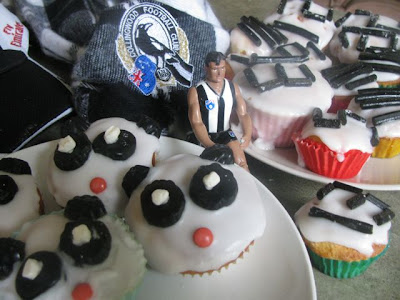 When Sylvia woke, we stayed and had a roast dinner and chocolate pudding with my family. As for the grand final result, it seems we might be making Collingwood cupcakes again next week. I wrote this post while watching the grand final (in between eating sausage rolls and putting Sylvia to sleep) and I thought I would end by announcing the winner but the score was a draw: 68-68. This means that Collingwood and St Kilda will return to the MCG next Saturday for another grand final. Stay tuned....
Posted by Johanna GGG at 15:37