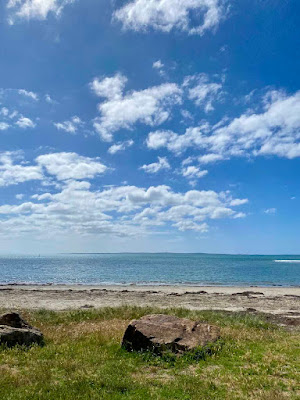 My workplace has a yearly retreat in the country to relax together away from work.  This year was a challenge with lockdowns causing two postponements but in early December, I joined colleagues in a weekend in Shoreham on the West coast of Western Port Bay.  It was lovely to get out of town to enjoy some fine food, beaches and the Red Hill Market. 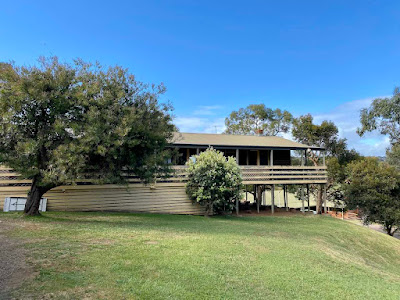 We rented a large holiday lodge (part of Iluka Retreat, 20 Shoreham Rd) which I was told was the sort of place where they hold girl guide camps.  It was about 2 hours drive, plus more with all the road works and heavy traffic.  After a busy day I arrived as everyone was walking to dinner.  I was so tired I had to drive there. 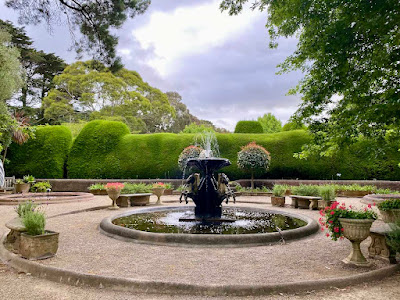 Dinner was at the Flying Calamari Brothers cafe at Ashcombe Maze (15 Shoreham Rd).  Before dinner we went to explore the maze and gardens.  (Usually it costs $18.50 but we did not have to pay, maybe because we were eating there.)  The maze was a labyrinth of hedges.  I enjoyed wandering through the different garden areas, and was impressed by the circular rose garden. 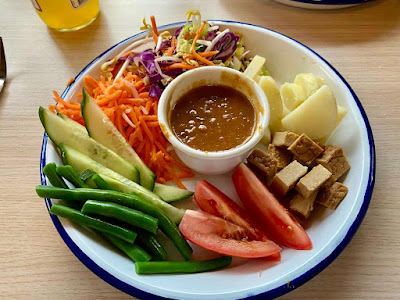 The menu was an extended fish and chips menu.  I was pleased there were some salads and vegetarian options.  I ordered gado gado and had a side of chips.  I was glad to have some comforting hot chips but with a decent serve of colourful vegies.  But I was so tired that I left early with one of my colleagues for an evening walk along the beach.  The ocean is good for tired souls. 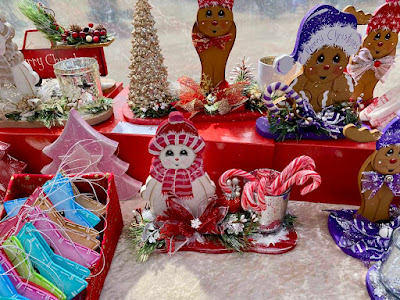 The next morning most of the group went to a Bushrangers Bay hike but I opted to have a quieter morning at the market and beach.  First stop was the Red Hill Market.  It is one of the older community craft markets in the state which is held on the first Saturday of each month.  The December market was full of fun Christmas items. 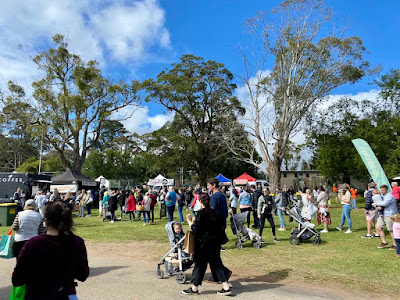 I was surprised I had to pay $5 for parking in the country but it was a busy place.  The market was big and took a while to walk through.  Above is one of the areas with lots of coffee carts, food trucks and queues.  Most of the market was outside around a sports oval but there were a few indoor areas in sheds too (where face masks had to be worn).  I enjoyed walking about but still cringe a little at crowds since the lockdown. 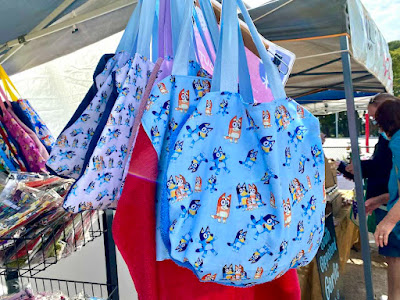 I had wished I felt more organised about Christmas presents because there were lots of great gifts.  I was fascinated to see these Bluey bags.  My daughter is too old to have been a fan of Bluey but I am quite interested in it and we had been having some bingewatching of Bluey over the holidays.  It is delightful, though it seems very strange they keep vegemite in the fridge! 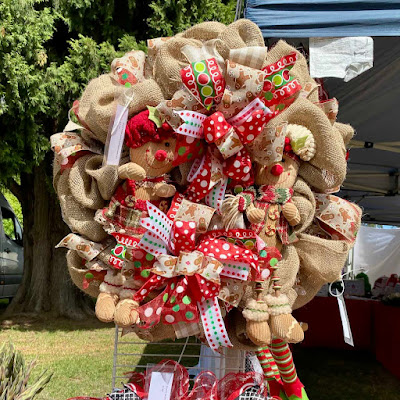 I think all the Christmas craft would appeal to anyone who - unlike us - does not have bags of Christmas stuff that had to be stored all year between festive seasons.  There were also lots of candles, toys, garden decorations, wind chimes, clothes, jewellery, crockery, body creams and food. 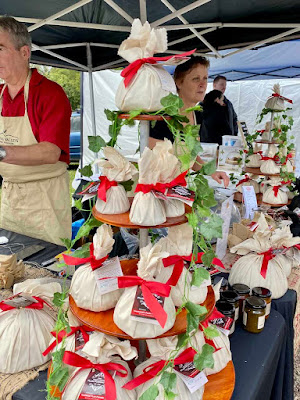 The food on offer was not regular groceries.  It was mostly either something to eat on site or fancy gifts, with just a little fruit and vegetables.  Some was just a joy to view (these plum puddings arranged in Christmas tree formation), others were so tempting (chocolate slices), alarmingly expensive (a punnet of organic cherries for $35), or intriguing (banana jam).  You can see a few of my purchases in my December In My Kitchen post.  I also bought a fantastic pain au chocolate for brunch because the queue for profitjes was far too long. 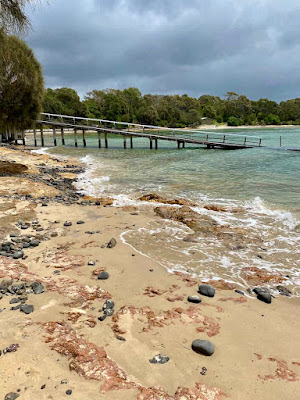 After the market, I drove over to Point Leo, where I had been reassured by those who knew the area that there was a fine beach.  No one mentioned the $4 to drive in, which surprised me.  I parked near the boat ramp and walked around to where the beach was quieter and had less rocks on the sand. 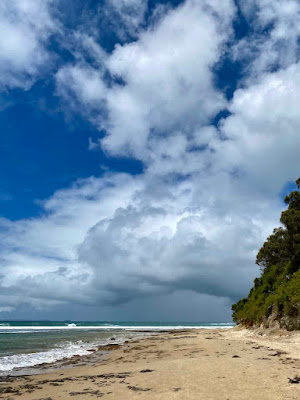 It was a cool early summer day.  This did not stop me walking through the waves but it did mean that my feet were rather cold and took a while to warm up.  There were so few people at the part of the beach where I was that I was loathe to go too far out on a beach that I didn't know.  I like to see others out further than me but there were none.  I talked to colleagues later and said I didn't like to go out too far in case of sharks and was told there is a local shark who just swims about but is harmless.  I still would not like to face it alone! 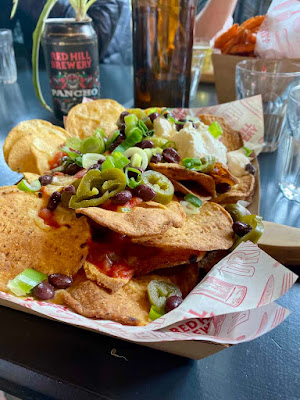 I returned to our accommodation and had a nice hot shower after my "swim". I then headed out with a group to the Red Hill Brewery (88 Shoreham Road) for a late lunch.  I ordered nachos with cheese & salsa, topped with guacamole, black beans, sour cream & jalapeno.  It was a tasty but rather large serving and I left some for colleagues to finish off. 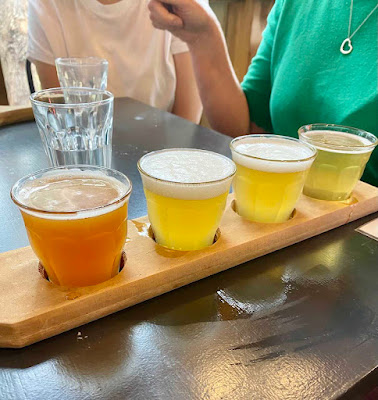 A few of my colleagues had tasting paddles of the different beers, including some Christmas specials.  I regret not remembering which ones they had but I know they enjoyed them.  Although a whole paddle was much better shared than just for one person.

One odd experience at the brewery was checking in with QR codes and vaccine passports when we arrived.  WiFi in the area was patchy and a group of us were waving our phones about to try and get enough of a signal to check in. 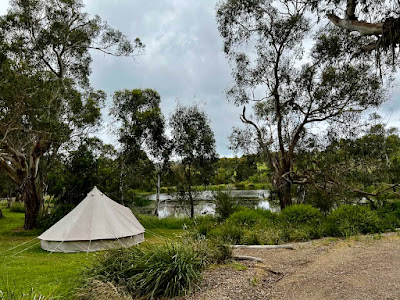 We went back to the accommodation to relax and prepare for dinner.  It was nice to chat and even go for a walk around the lake.  One colleague and I were out exploring this area when we came across a snake curled up.  We slowly backed away.  My colleague thought it was a red bellied black snake but it was pretty relaxed so we didn't feel threatened by it.  (Having said that, when I spoke to a friend after the retreat she said her partner had been bitten by a snake twice in the past 6 months, both times noticing the fang marks and blood after the snake had gone but the hospital had confirmed they were dry not venomous bites.)   We also enjoyed watching the kookaburras. 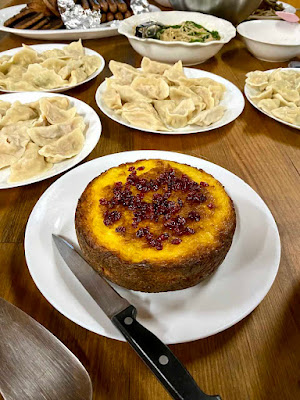 My colleagues come from a variety of countries and make some impressive dishes.  I am always grateful that they look out for me as a vegetarian.  One group was at the BBQ, another was making dumplings from scratch, a group made salads and one made Tachin.  A special vegetarian version made without chicken.  This Iranian dish was made by parboiling the rice, then mixing it with egg, yoghurt and saffron and frying until crispy.  Served with barberries, it was a real treat.  In fact, the whole meal was pretty special. 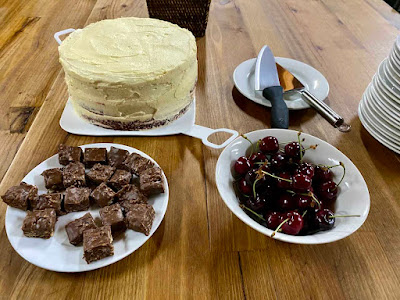 We had a round of dish washing after the mains.  We also packaged up the leftovers and a gentle tut tutting for our catering volunteer who failed in his main task to make sure we didn't have heaps of leftovers!  It was good to have a break before digging into the red velvet cake, cherries and ginger fudge (I made the last one by mixing chocolate, condensed milk, butter and gingery coconut flakes).  While we ate it in front of a roaring fire, my director led us in a trivia quiz and some fun awards. 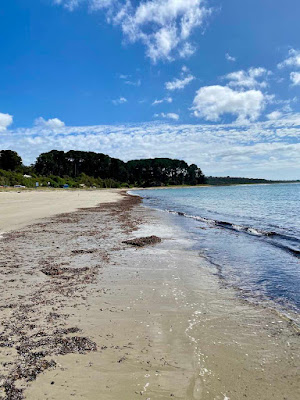 The next morning everyone was tidying up the food and getting ready to go home.  WiFi was so bad that I drove to Shoreham beach for a quick walk and to check into my GPS.  Shoreham seems a great place to get away from the rat race because crowds are discouraged by patchy WiFi and lots of seaweed on the beach. 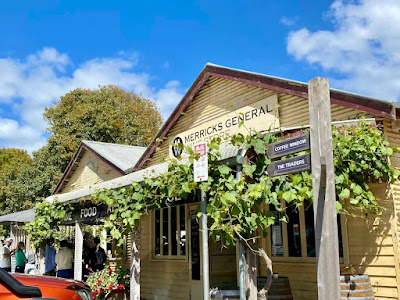 I wished I had eaten more for breakfast so I stopped at the Merricks General Wine Store (3460 Frankston-Flinders Road) for a pain de chocolate and orange juice to fuel me for the journey.  I liked the look of the dining room but needed to make a move. 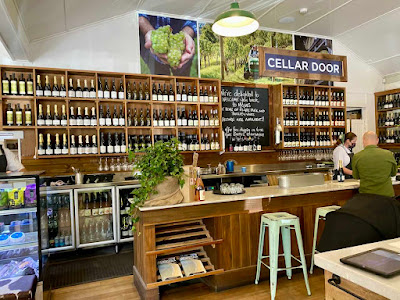 The area seems to have lots of wineries, as well as beaches and scenic walks.  I am familiar with the Port Phillip Bay side of the Mornington Peninsula but not the Westernport Bay side where Shoreham is located.  It is less busy and feels more rural. 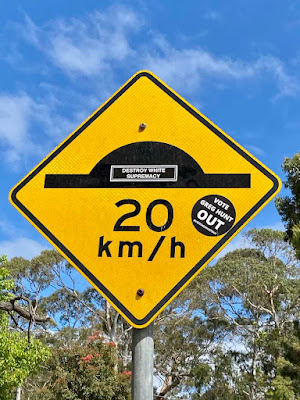 One last sight on the way home was this speed sign with political stickers.  It is hard to escape politics even when in a quiet corner of the country.  But it was nice to get away and have some relaxing times with colleagues after a year where many of us have been stuck at home for so long in lockdown.