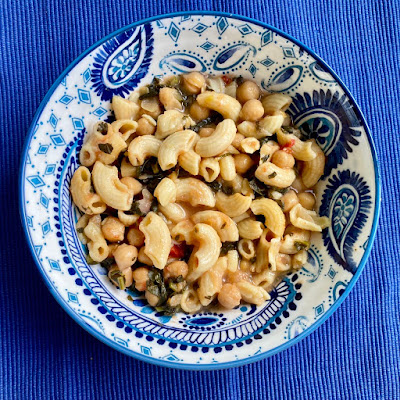 Lockdown is slowly easing and already it seems odd how worried we were shopping just a few months ago as though we were headed into home for years without any food but what we could stuff in our pantry.  I went to a local Middle Eastern shop and bought bags of dried fruit, dried legumes and grains.  The great part of this is that it made me cook outside my comfort zone.  In today's post, this means I finally made pasta e cec (ie pasta and chickpeas)i! 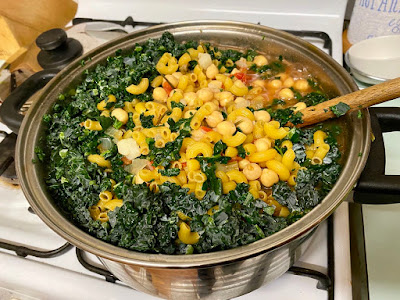 I am usually too disorganised to soak chickpeas and so tinned chickpeas are far more common in their kitchen.  But somewhere I had grown to want to make pasta e ceci.  I suspect I got the name wrong.  (I made a colleague laugh today when I said 'asafoetida' instead of 'Antifa'.  Oh no, that sounds like something that Trump would do.  If he had ever heard of asafoetida!)  I think I had a pasta e fagioli (ie pasta and beans) at Ti Amo in Lygon Street many months ago when we could crowd a work group around the table.  But, having dried chickpeas, I thought I was seeking pasta e ceci.  And followed through!
Let me tell you, there were no regrets at pursuing pasta e ceci.  I loved it.  I looked up a few recipes and mainly followed The Guardian and The Tasting Table.  I recommend reading the introductions to both recipes about this dish being a traditional Italian dish.  Like all great traditional dishes, there are many versions.  It seems to be a humble stew with a flavoursome broth. 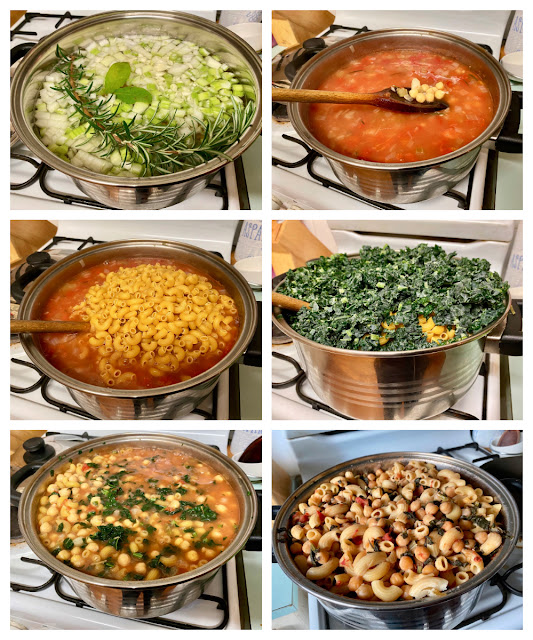 Despite knowing I could put my own spin on it, I was a bit worried about when to add salt to chickpeas and how much rosemary to add.  I am still not sure of the answer to these questions but was pretty happy with what I did.  I liked that I cooked most vegies with the chickpeas from the start and also adding kale at the end.  Overall I cooked the chickpeas for about 1 1/2 hours but I think I could have cooked them longer to make sure they were really meltingly soft.
And I made oodles of this dish.  It made a lot of dinners and lunches over a couple of weeks.  I can confirm that it froze well.  But the pasta does have a way of soaking up liquid so I just added a bit of liquid and a pinch of salt when I reheated it.  It was not rich and beany thick as in my vision but it was satisfying comfort food with lots of vegies and pasta. 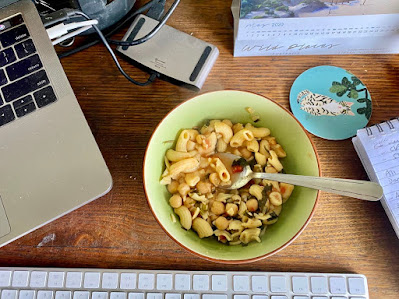 I will write more about the easing of the lockdown another time but for now I will just mention that I have watched a lot more news lately.  It seems such a significant time in history as well as a time where change happens so quickly.  When I made this soup I watched current affairs show, Insiders, on catch up in the evening.  It had originally shown on the same day at 9am.  By the time evening came around the show seemed out of date.  Our federal education minister, Dan Tehan, had expressed frustration at the slowness of our state to reopen schools.  By the time that I watched, there had been an announcement of an outbreak at a school and an apology from Dan Tehan.
That was about 5 weeks ago and look at how much has changed since then with easing lockdown here and the global wave against racism since George Floyd's brutal death at the hands of police.  A friend and I were talking about how it is only June and there is still a lot of the year to go.  Who would be brave enough to guess what it will bring.  I would like to predict I might try pasta e faglioli but as it has taken so long to try pasta e ceci, I am guessing it might not be too soon.
More pasta and chickpea recipes on Green Gourmet Giraffe:
Chickpea and spinach soup (with noodles) (gf, v)
Cavolo nero and chickpea pasta
One pot pasta with chickpeas and zucchini (v)
Radiatore pasta with tomato and chickpeas (v)
Risoni with chickpeas, lemon, and mint (v)
Pasta e Ceci
Serves 10-12
500g dried chickpeas
2 onions, chopped
3 stalks celery, chopped4 garlic cloves
2 sprigs of fresh rosemary
2 bay leaves
400g tin of crushed tomatoes
2 small potatoes, peeled and diced
3 tsp salt
1 bunch cavolo nero (Tuscan kale), sliced
500g short pasta such as tubetti, ditalini, broken tagaliatelle
Soak chickpeas overnight (or at least 12 hours) and drain.  Place in a stockpot with onion, celery, garlic, rosemary, bay leaves and about 2 litres of water (I just had mine 1 inch about the chickpeas because I used my smaller stockpot and really should have used my large one.)  Discard the rosemary and bay leaf (but don't worry if little rosemary leaves are floating in the broth).  Stir in the tomatoes, potatoes and salt.  Simmer another 1/2 to 1 hour. or until chickpeas quite soft.  Stir in kale and pasta.  Simmer for about 10 minutes.  Check and adjust seasoning.  My stew had very little liquid left the next morning so each time I served some I added some water and a pinch of salt.  The stew freezes well.

On the stereo:
Little Earthquakes: Tori Amos
Posted by Johanna GGG at 22:42